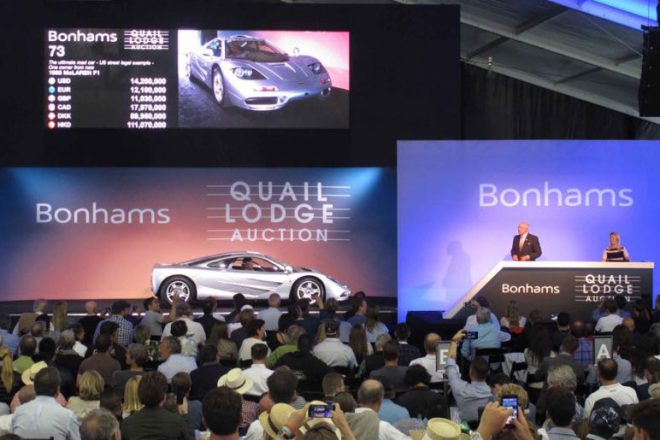 While the world-famous Monterey Car Week events and auctions have sadly been cancelled for 2020, Bonhams’ U.S. Motoring Department has retooled its 23rdQuail Lodge Auction into a collaboration with the famed Petersen Automotive Museum. Scheduled for August 14, the Bonhams auction serves as part of the Petersen Car Week, a welcome set of car events including a Concours d’Elegance finale on August 16. This year, the Bonhams auction will take place at the company’s Los Angeles saleroom. Vehicles will be on display and available for one-to-one virtual previews. All will be conducted with Bonhams specialists August 12-14 at the museum by appointment. As always, the Bonhams auction will include a definitive printed catalogue for reference to subscribers and upon request.

The revamped Quail Lodge Auction for 2020 features Bonhams’ characteristically broad and deep automotive offerings. Early featured consignments form a virtual tour throughout automotive history, ranging from 1920 through the 1925-48 Classic Era to classic sports and exotic supercars, with virtually everything in between. 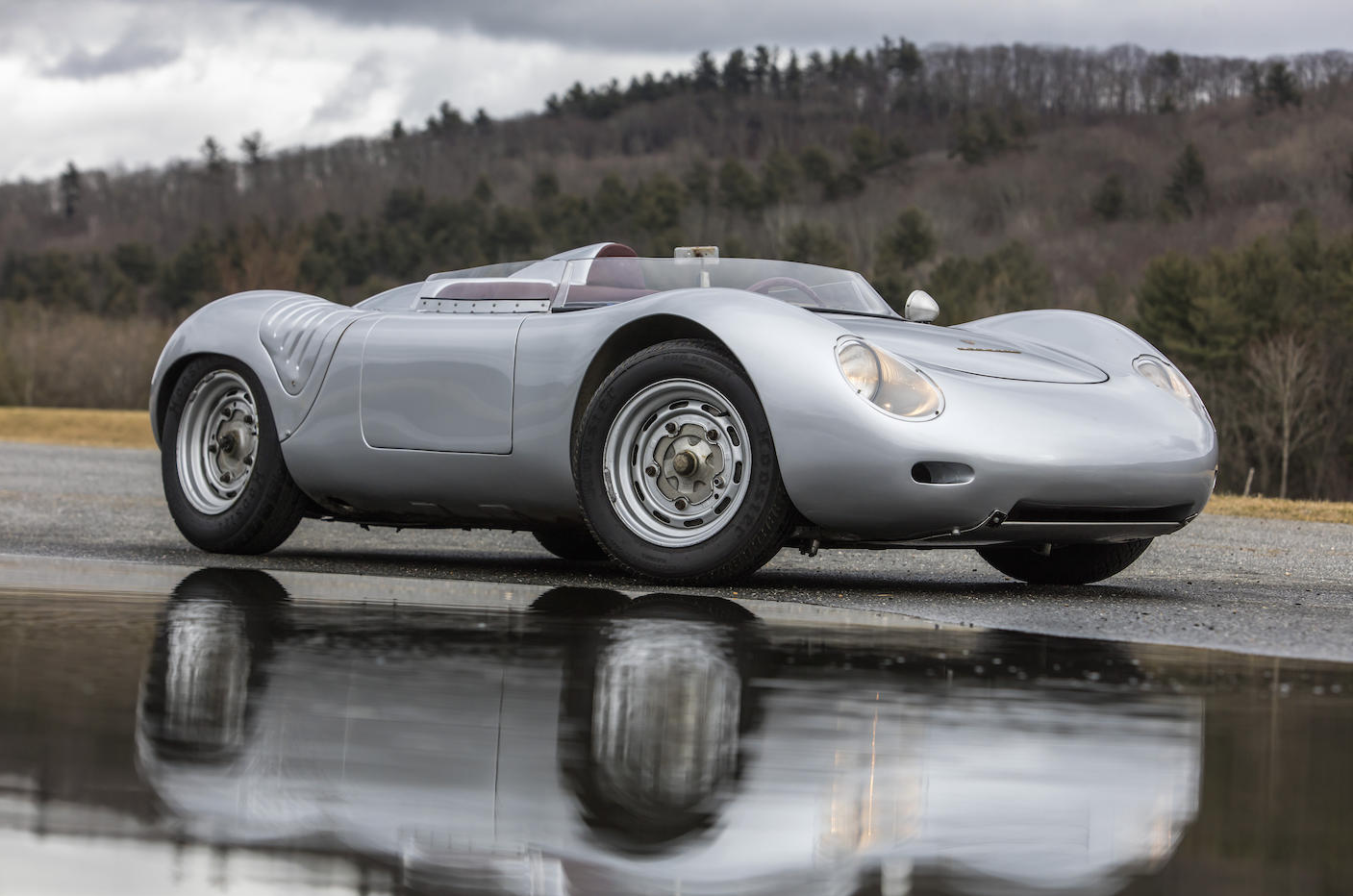 Both Keith Neelans, our Northeast Sales Manager, and Ross Dressel, our Midwest Sales Manager, have gravitated to the 1959 Porsche 718 RSK Spyder. As the ultimate development of Porsche’s 550 Spyder, the 718 RSK Spyder is one of the most successful sports-racing cars of its era; both in international competition or American SCCA events. Subsequently, just 34 were produced, including two-seat and single-seater configurations. Boasting an enviable victory tally, the 718 RSK Spyder won at the 24 Hours of Le Mans and Sebring 12 Hours. In addition, Porsche scored a 1-2-3 podium sweep at Italy’s dangerous Targa Florio. Powered by Porsche’s amazing air-cooled 1.5-liter, quad-cam, flat-4 engine developing 142 HP, the 718 RSK Spyder routinely defeated far more-powerful opposition. This is thanks to its light weight, excellent braking, and uncanny responsiveness.

Bearing Chassis Number 718-031, this 718RSK Spyder was campaigned in period by SCCA Porsche racer Bernie Vihl and by Bob Holbert, the Pennsylvanian VW-Porsche dealer and racing driver, whose exploits would include a stint driving Cobras for Shelby American in the 1960s. Further, this Spyder’s finest hour came at the November-December 1959 Bahamas Speed Weeks. There, Holbert drove the Porsche to multiple first-place finishes. Now offered from single ownership since 1974, the offering of 718-031 promises to capture the attention of motorsports fans the world over. 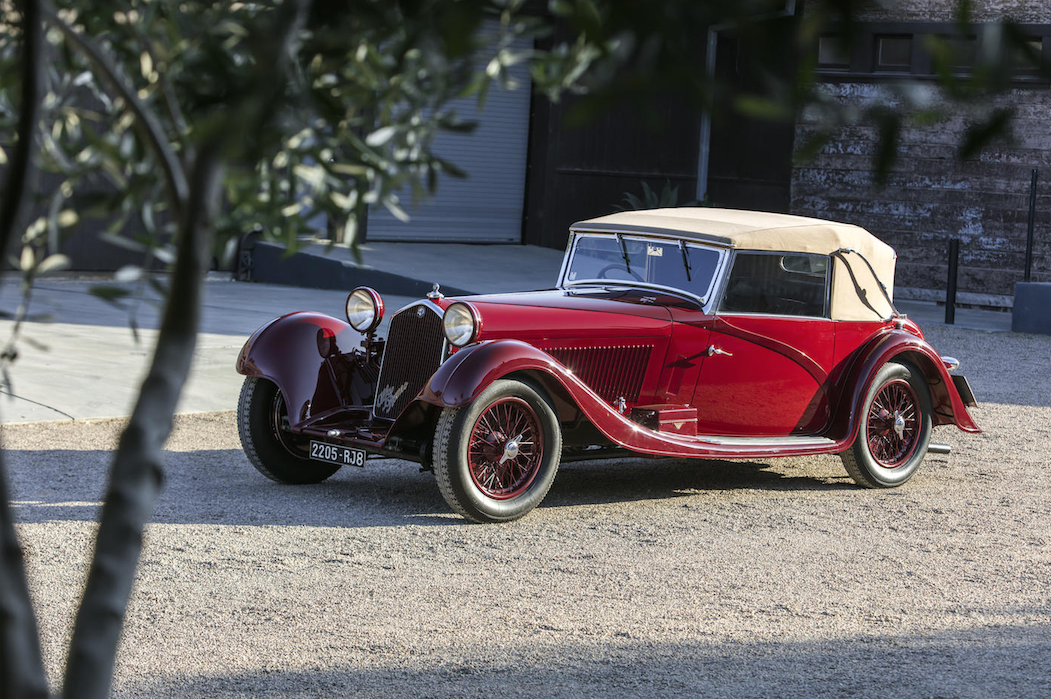 Completed in early 1934, this 8C 2300 is one of just 188 examples produced in total.  Further, it was delivered new as a rolling chassis to Joseph Figoni’s Paris workshops. There, it received the sporting, yet elegant Cabriolet body, it carries fascinating history. This includes secretive storage during the German occupation of France. In the early 1950s, the 8C 2300 was sold to Alfa collector Jim Ibold of Ohio. He carefully preserved the car’s originality and integrity. The subsequent owner exhibited the Alfa at the Pebble Beach Concours d’Elegance. It was displayed as one of the last original, running 8C 2300s in existence. Moreover, this was followed by a full restoration to its original color combination. Five years later, it returned to Pebble Beach. Subsequently, it was shown in Europe at the celebrated Concorso d’Eleganza Villa d’Este. 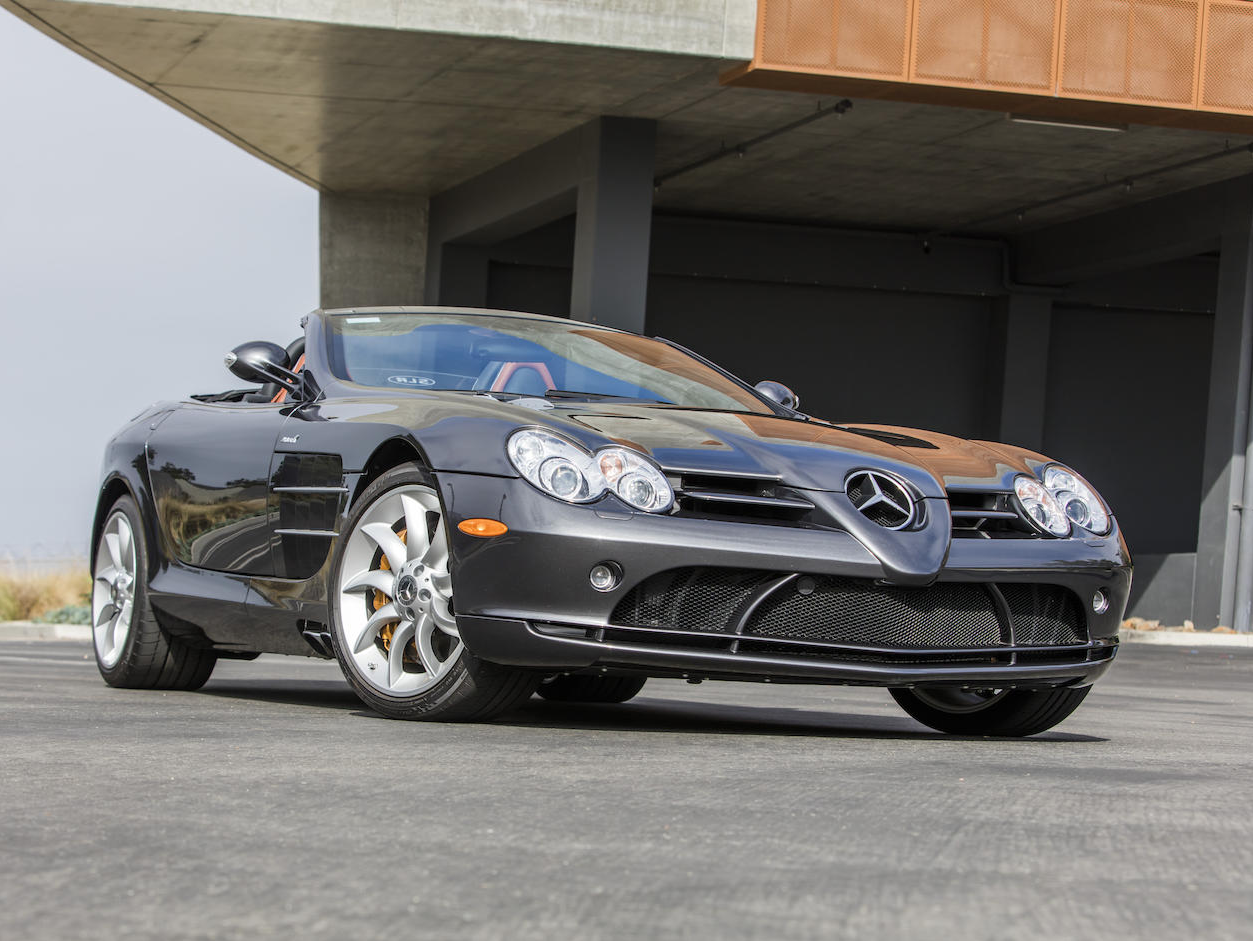 Utilizing extremely strong and lightweight carbon-fiber construction and cutting-edge technologies throughout, the SLR McLaren is powered by Mercedes’ all-alloy,5,439 cc supercharged SOHC V-8. It is good for 617 HP with a Lysholm-type twin-screw supercharger with twin intercoolers. Further, the AMG Speedshift R transmission provides three manual modes. Moreover, other stunning technical features include “Sensotronic” brake-by-wire, carbon-ceramic brake discs, and an automatic air brake. Performance is shattering, with road tests quoting acceleration from rest to 60 mph in the 3.2-to 3.5-second range, the quarter-mile in 11 to 11.5 seconds, and a 209-mph top speed, with over 1.0 g on the skidpad! Lastly, comprehensive  passenger amenities round out this highly drivable supercar.

This highly desirable, late-production 2008 Mercedes-Benz SLR McLaren Roadster is an exceedingly rare Saks Limited Edition model. In addition, it is less than 2,000 miles from new. Further, smart collectors are beginning to realize the many virtues of these special vehicles. It will be interesting to see how this rare example performs with Bonhams. 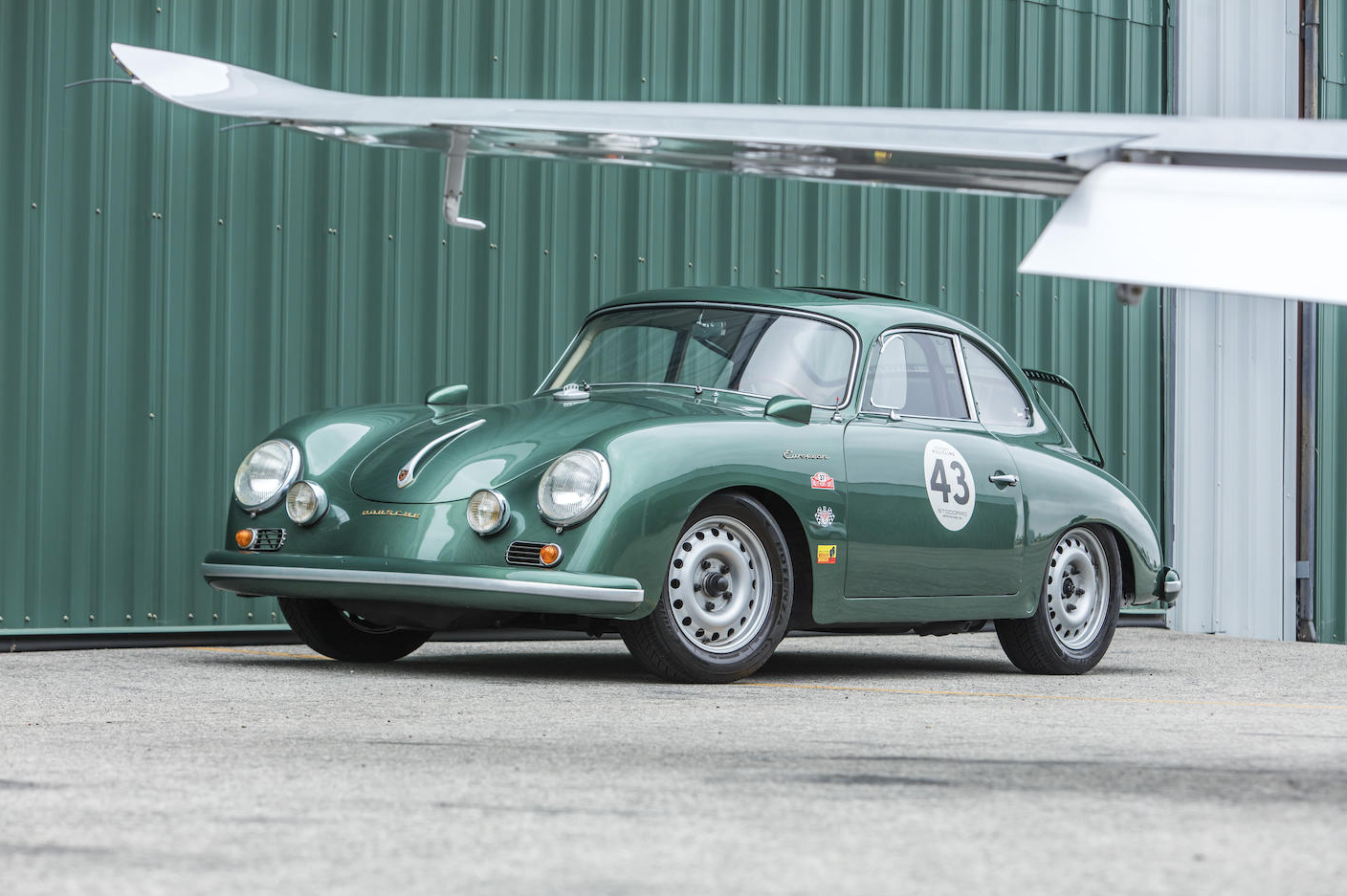 This charismatic 1956 Porsche 356A Outlaw is the pick of Juan Garcia, Premier Financial Services’ West Coast Sales Manager. Porsche collectors, restorers, and enthusiasts have long enjoyed Porsche’s cornerstone 356 line. It is praised in all of its many forms, often with performance enhancements, and suspension tweaks. Additionally, it often features other upgrades suitable for fast touring and vintage racing and rally events. This car is often referred to as “Outlaw” renditions of Porsche’s venerable 356-series models. Modified examples run the gamut from mild to wild. They have gained the acceptance of even the most committed marque enthusiasts and collectors. This is due to their imaginative upgrades, fine details and startling performance.

This vehicle is equipped with twin driving lamps, fender-mounted mirrors, racing numbers and ventilated steel wheels sans hubcaps. This Outlaw is based on Porsche’s already desirable 356A. The 365A marked the definitive turning point in Porsche history. Moving away from the use of adaptations of the relatively humble, yet nonetheless proven VW-based mechanicals of the earlier cars. Sporting a coveted factory sunroof, this 1956 Porsche 356A Outlaw is a tasteful example. It boasts period performance details and features, delivering a great blend of classic Porsche with a heightened overall experience possessed by few original cars.

Given the wide array of desirable collector vehicles offered by Bonhams at The 23rd Quail Lodge Auction, competition among bidders is anticipated to be fierce. Contact Premier Financial Services today to see how our easy pre-approval process takes the stress out of bidding and allows you to focus on the scoring the winning bid on your next collector car. Regardless of whether you’re looking for a new exotic Supercar, highline luxury model or blue-chip classic, the Simple Lease from Premier Financial Services can help turn a dream into a dream garage. Be sure to brush up on our Auctions 101 post before setting off and get ready to enjoy the Amelia Island experience to the fullest with us! 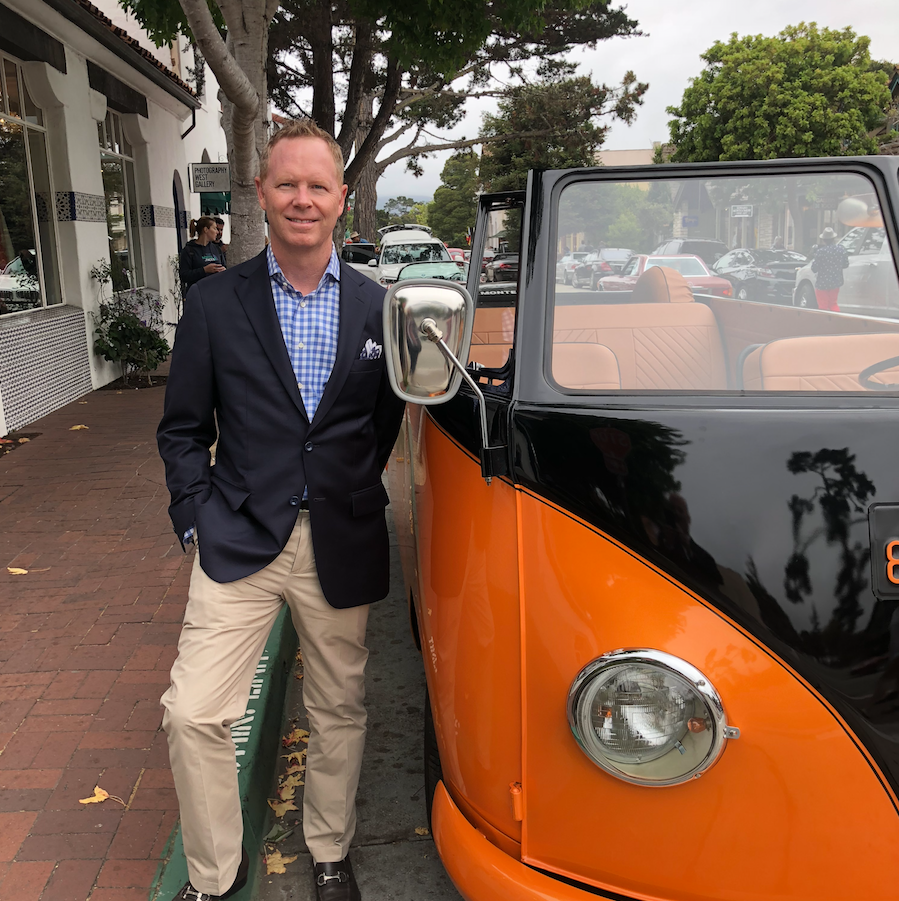