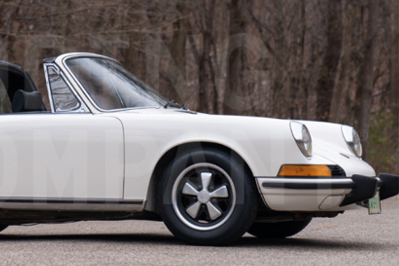 When Porsche Converted the Convertible

Porsche promises that Targa and convertible models will eventually join the all-new 2020 911 Carrera coupe, giving open-air Eleven fans something to look forward to. In the meantime, classic 911 Targas make tempting choices. Aside from the general layout and body shape, modern and classic are worlds apart – and that’s a reason to want both.

The Porsche 911 reached a fairly significant evolution milestone in 1972, when the base T model, upgrade E and high-performance S each featured its own version of a new 2.4-liter version of the familiar six-cylinder boxer engine. Each model could be ordered as a coupe or a Targa.

Porsche delivered the first 911 Targa models to the United States in 1967, and its unique design inspired imitations. Automotive media made the model designation a kind of generic term – “targa top” – applied to any vehicle with a pop-out roof panel.

Porsche has since copyrighted the Targa name, which, by the way, did not refer to the car’s roof design. “Targa” sprung from the marque’s numerous victories in Italy’s Targa Florio sports car race, which Porsches won a record 11 times, including the final race in 1973 with a 911 Carrera RSR.

The original 911 Targa was born of necessity, or at least potential necessity. In the mid-1960s, carmakers projected a threat to convertibles from U.S. regulators. After selling all those 356 Speedsters and Cabriolet models in America, Porsche wanted to meet customer demand for an open-air 911. The company ran the risk, however, of wasting design and tooling costs if convertibles were later banned from its largest market.

Ferdinand Alexander “Butzi” Porsche, designer of the original 911 coupe, proffered the solution. His design used a removable roof panel that attached to the windshield header in front and a structural hoop that spanned the B-pillars. Initially covered in stainless steel, the hoop added body rigidity and rollover protection. Behind the hoop, a soft roof section folded under a tonneau cover. A wraparound glass rear window became an option in 1968, and it replaced the fold-down section for 1972.

The 911 Targa was not, however, the first sports car with such a pop-out roof design. The tiny Toyota 800 Sports, shown as a prototype in 1962, entered limited production in 1965 with a lift-off aluminum roof panel that could be carried in the trunk. Like the Porsche, the Toyota even had an air-cooled boxer engine, though with just two cylinders and 44 horsepower.

While a U.S. ban on convertibles never materialized, the 911 Targa quickly won over Porsche customers by providing open-air driving with a coupe’s tighter weather protection. In some years, the Targa body style accounted for more than 50 percent of U.S. 911 sales.

The 1972 Porsche 911 models introduced the upgraded 2.4-liter version of the marque’s renowned flat six, equipped with Bosch mechanical fuel injection. On 1973 U.S. 911T models, this was changed to the Bosch K-Jetronic system. It was still mechanical injection, but with electrically operated sensors.

The new “915” transaxle, which allowed higher torque and provided easier shifts, came in both 4-speed and 5-speed versions. The model offered by Gooding has the 5-speed, along with Fuchs alloy wheels, the Comfort Group, air conditioning and Blaupunkt AM-FM stereo. In 1973, this well equipped car cost about $11,000.

The increasing performance demanded even more vigilance over the classic 911’s handling quirks. For purists, that was always part of the car’s charm.

Said Patrick Bedard for Car & Driver in 1972 of the newly fortified 2.4-liter 911 models: “Neither the performance nor the handling nor the braking nor the comfort nor the convenience can justify the great price, only the undissolving Porsche character can.”