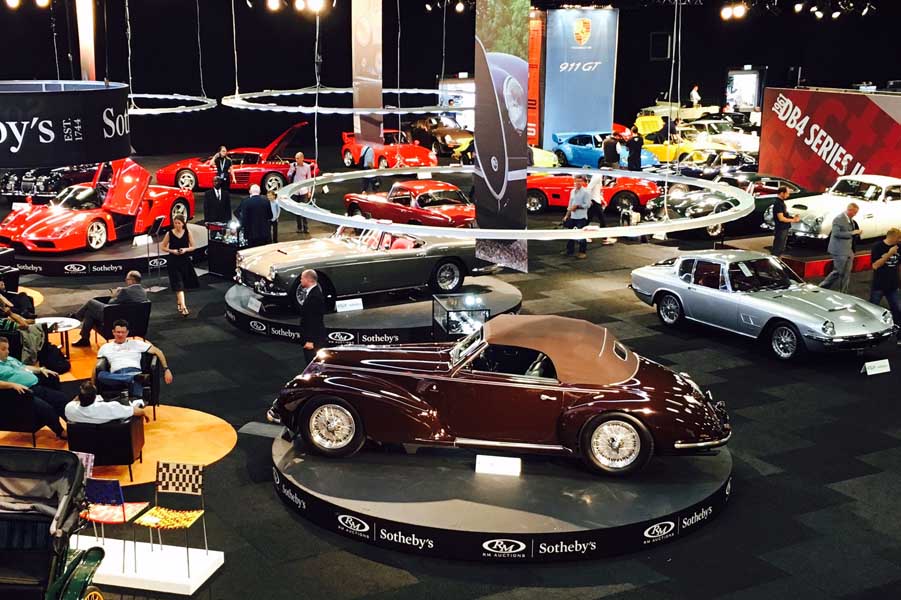 Following the long-awaited return to live high-end auctions and classic-car events at Amelia Island in May, RM Sotheby’s, Bonhams, and Gooding & Company are all set to return to Monterey for their signature live auctions in August. For its part, while Blenheim, Ontario-based RM Sotheby’s has quite successfully pivoted to a mix of online and live auctions. The company will make a welcome return to its foundational Monterey live auction during Monterey Car Week. Not only is RM Sotheby’s back on the Monterey Peninsula, the auction house is back with a bang.

There are three days of auctions now on the docket. This is thanks in part to motorcars from the noted private collection of the late Houston businessman and longtime RM client, Paul Andrews. Auctions start on Thursday, August 12 at 7:00 pm PDT. They continue on Friday August 13 at 5:30 pm PDT, and Saturday, August 14 from 5:30 pm PDT.

As always, the auction lineup to be offered by RM Sotheby’s is rich and diverse. It spans almost the entirety of automotive history with a deep representation of classic sports and racing cars. In advance of Monterey Car Week, we have canvassed the sales representatives from Premier Financial Services for their favorite vehicles coming to Monterey for the RM Sotheby’s Monterey Auction, and we hope you will enjoy our advance coverage.

Premier’s Midwest Sales Manager, Ross Dressel, chose Lot 120. This captivating 1962 Aston Martin DB4GT, one of only 19 ever produced and one of six left-hand drive examples. This car features gorgeous bodywork penned by famed Italian designer Giorgetto Giugiaro. The DB4GT was Aston Martin’s penultimate GT-class racing car of the 1960s, followed by the even more-radical “Project” cars. According to RM Sotheby’s, this example is a uniquely specified car. It was ordered via Garage Mirabeau of Paris and delivered new to Commander James Murray, who was believed to have been a U.S. Naval attaché.

Rarer than Ferrari’s 250 GTO, original DB4 Zagatos command eye-watering winning bids at auction. It is confirmed by one example sold in 2015 that gained fame as the most valuable British car ever sold at the time at 9.45 million British Pounds. This example from the collection of the late Paul Andrews promises to eclipse that lofty level when it crosses the RM Sotheby’s auction block at Monterey.

Famous among the Jaguar faithful as “The Ice Racer,” is the iconic 1955 Jaguar D-Type Sports Racer. It is Lot 110, and is the pick of our Southwest Sales Manager, Michelle Yancey. Delivered new to Finnish Jaguar connoisseur Curt Lincoln, this D-Type racked up a string of racing victories in period and again more recently over two decades. According to RM Sotheby’s, it sports an original, factory-upgraded 3.8-liter engine, gearbox, chassis frame, monocoque body and brake calipers. A comprehensive restoration was performed by the marque experts at CKL Developments and since acquisition by the Andrews Family, the D-Type was driven and enjoyed over some 2,500 miles. In addition, documentation is excellent, including a FIVA Passport, FIA paperwork, and a Heritage Certificate issued by the Jaguar Daimler Heritage Trust. Lastly, the Jaguar, as offerred is a fabulous touchstone to the heroic age of motor racing.

Premier’s Southeast Sales Manager, Chris Warren, has his eyes on Lot 105, this gorgeous 1961 Aston Martin DB4GT. It is a factory-sponsored ‘Sanction II’ car. Further, this Aston is faithful to the original and extremely rare original Zagato-bodied DB4GT of the early 1960s. With only 19 examples originally produced, the DB4GT Zagato was Aston Martin’s ultimate challenge to Ferrari in a racing “arms race” between the two marques during the early 1960s.

This Aston is also renowned as the car that forced Ferrari to develop and then seek racing homologation for the 250 GTO. Of course, demand for the DB4GT Zagato has remained exceedingly strong, given the car’s incomparable beauty and scintillating, race-inspired performance. While the online description has yet to be posted, this DB4GT ‘Sanction II’ comes from the just-added Paul Andrews collection. It will surely attract a great deal of attention as a later continuation of the original 19-car series from smart and well-heeled bidders.

Catalogued as Lot 204, this 2003 Lamborghini Murciélago is the pick among the RM Sotheby’s offerings from Keith Neelans, Premier’s Northeast Sales Manager. The Murciélago marked the start of a new era at Lamborghini. It was created under new German ownership as part of the VW Group under Audi A.G. The introduction of the new Lamborghini was dramatic. It premiered with a stunning nighttime presentation at the base of Mount Etna before a select group of 200 invited guests. They witnessed an amazing Seven Sins-themed presentation with sound and lighting effects and dancers. Additionally, Sicily’s fabled volcanic ash seemingly giving rise to Lamborghini’s most brilliant ‘supercar’ yet conceived.

While the new Murciélago’s design was totally modern, shockingly angular and seemingly otherworldly in all respects, its heritage was unquestionable, as was its performance, with a 570-horsepower, 6.2-liter V-12 engine. The RM Sotheby’s online auction description is not yet available at the time of writing; however, the car sports fabulous colors and refreshingly, it appears to be as delivered from the factory and unmodified.

One of the most iconic and successful competition-oriented cars on either side of the Atlantic, is Lot 209. This stunning 1966 Shelby GT350 H,is the collective pick of the team at our Woodbury, Connecticut corporate offices. Infamous as the “Rent-A-Racer,” the GT350 H was a special model, exclusively available for daily rental customers over age 25 at your friendly neighborhood Hertz rental agency. Many, if not most, Hertz cars saw some hard duty on the dragstrip or road-racing tracks back in the day. They lent irreplaceable color to these harder-core Mustangs. This example is an extremely rare 4-speed car. In comparison, while most of the 1966 batch used more user-friendly and less damage-prone automatic transmissions. This GT350 H was sold new in St. Louis, Missouri, remaining there until 2006 before migrating to Florida and then Southern California. Freshly restored by a Shelby marque expert, it is an unqualified legend.

The Simple Lease from Premier Financial Services takes the stress out of bidding at auction. Premier is your best path to owing any high-end automobile,. From leasing a Ferrari supercar from auction to driving it home from the dealer. Preparation is key to getting the car of your dreams, so be sure to check out the many resources we have provided elsewhere on the Premier Financial Services website and contact us today. Representatives from the Premier Financial Services team of vehicle-leasing experts will be in attendance at the RM Sotheby’s Monterey 2021 auctions. They will be ready to assist existing and new clients and monitoring collector-car valuations. Be sure contact us now to prepare to bid from with confidence and experience our service and advice first-hand.