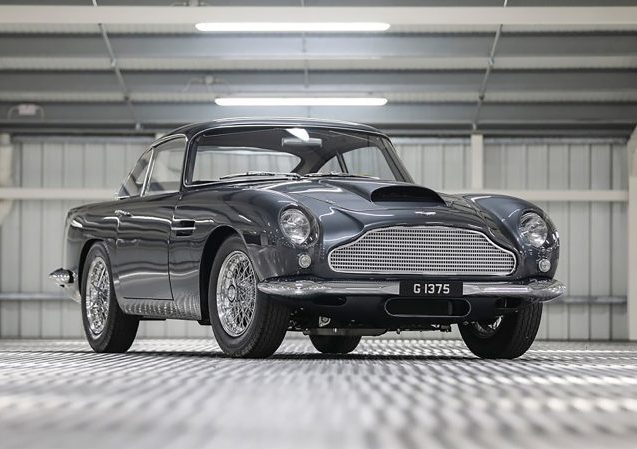 When Aston Martin Took On Ferrari

Aston Martin has certainly reaped rewards from touting its connection to the James Bond film franchise. It’s a fun tie-in, but one that sometimes seems to overshadow the marque’s racing history.

A few years before “Bond, James Bond” would take the wheel of a DB5 in “Goldfinger,” Aston Martin had established the model’s look on an ultra-limited production road and track model, the DB4GT. The carmaker built just 94 of these special lightweight models, including 19 bodied in Italy by Zagato.

A DB4GT that sold at Gooding & Company’s European Sporting & Historic Collection this past January brought £2.75m ($3.76m). It was also one of the 30 built as left-hand drive.

Before Ford v Ferrari, Aston Martin was a competitive thorn in Ferrari’s side. The two were fierce rivals in the 1950s GT and sports car racing. Aston Martin ended the decade by taking 1-2 in the 24 Hours of Le Mans in 1959, with Carroll Shelby and Roy Salvadori driving the winning DBR1.

Earlier that year, a prototype for a new Aston Martin road and track machine, identified as DP199/1, won at Silverstone and set a lap record in the hands of the brilliant Stirling Moss. That car would reach limited production as the DB4GT. The DB4 production model it was based on was introduced for 1958. It was a more modern car than the Ferrari 250 GT series, thanks to such features as rack-and-pinion steering, disc brakes and optional radial tires.

Though not a large coupe, the DB4 was deemed too heavy to race. Ferrari offered a lesson here. Its 250 GT Tour de France was lighter and more powerful than the standard 250 GT offerings. The TdF was among the last of a breed of factory GTs that could be driven to the track, raced and then driven home. For the DB4GT, Aston Martin essentially followed that template, but in its uniquely British way.

The DB4GT that arrived in September 1959 was shorter and lighter than the regular DB4 and packed a bigger punch under the hood.

Though built in the same superleggara (super-light) fashion as the production DB4, using aluminum panels over a tubular frame, the DB4GT was lighter. Firstly, Aston Martin shortened the wheelbase by about five inches (to 93 inches). The DB4GT’s body panels are super-thin 18-gauge aluminum, so you wouldn’t want to lean on a fender.

Aside from the shorter wheelbase, the DB4GT’s biggest departure from the elegant DB4 design was the front end with faired-in headlamps with Perspex covers. This iconic Aston Martin design cue would later be adapted to the DB4 Vantage and then of course the DB5 and DB6 models.

Further reducing weight, rear seats were deleted, Perspex replaced glass for the backlight and rear quarter windows, bumper overriders were left off and the side windows were made frameless. The changes cut weight by about 200 pounds, giving this special model a 2,600-pound fighting weight on par with the Ferrari TdF.

In the standard DB4, the 4.0-liter inline six-cylinder engine made 240 horsepower, on par with the “regular” Ferrari 250 GT’s 3.0-liter V12. For the DB4GT, Aston raised compression, added a dual-plug cylinder head and triple dual-throat Weber 45 DCOE carburetors. The result was 302 horsepower at 6,000 rpm, or about 40 more than Ferrari claimed for the 250 GT TdF.

The lightweight Aston Martin DB4GT could zing from 0-60 mph in six seconds and reach 153 mph. The Girling disc brake system from the marque’s sports-racers was used on the DB4GT.

Notably, the DB4GT sported a luxurious interior with the same Connolly leather upholstery and deep pile Wilton carpet as the road car. Why should racers be uncomfortable? The roster of racing greats who raced the DB4GT included Salvadori, Moss, Jim Clark and Innes Ireland.

The DB4GT sold by Gooding earlier this year, chassis 0144/L, is among the 30 left-hand drive models built. The car went through many owners and cosmetic and mechanical changes over the decades. One owner had commissioned body changes to mimic the later DB5 and DB6 rear styling, but then a subsequent owner had those changes reversed.

The owner who eventually sold this rare Aston Martin at the Gooding & Company auction had put it through a painstaking restoration that upgraded the engine to 4.7 liters and painted the car in the original DB4GT prototype’s livery.

Perhaps this car’s story could be titled, “You Only Live More Than Twice.”