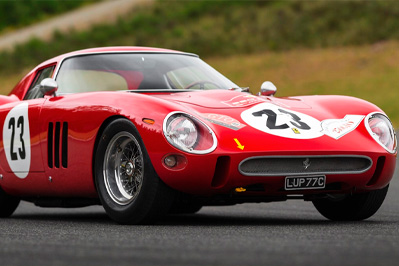 Another Record Stands to Fall

A Ferrari 250 GTO currently holds the world record for most ever paid for an automobile. WeatherTech founder David MacNeil reportedly paid $70m for GTO #4153, considered one of the five best of the three-dozen made. (Floormats are very big business!)

This month, another GTO is likely to set the record for the most ever paid for a car at auction. RM Sotheby’s Monterey sale is offering a 1962 GTO, #3413. It is one of a few that were re-bodied by Scaglietti with the Series II/GTO 64 body. It is expected to bring $45-$60m.

For 1962, the FIA changed the World Sportscar Championship to the International Championship for GT Manufacturers. The focus was on “production” GT cars rather than sports prototypes. Ferrari’s 250 GTO, which began as an evolution of the 250 GT SWB, was tailor-made for the series.

The aluminum-body GTO rode on a lighter, stiffer variation of the SWB’s 94.5-inch wheelbase chassis and, at just under 2,000 pounds, was about 150 pounds lighter than the competition version of the SWB. Power for the GTO came from the Testa Rossa’s six-carburetor, 300-horsepower 3.0-liter V12, which was mated to a five-speed transmission.

Notably, the forcefully sleek body’s aerodynamics offer wind tunnel and track testing to maximize top speed and stability. The efforts paid off with a top speed of about 180 mph.

Although the GTO was intended mainly for international endurance racing, with bare-bones interior accommodations, it was still a true GT in the sense that it could be road-driven if desired. That made its storied racing career all the more impressive.

The 250 GTO’s stunning performance and endurance propelled Ferrari to  the International Championship for GT Manufacturers in both 1962 and 1963 in the over 2-liter category. For 1964, the Division III category also included cars over 3 liters, bringing tough competition from the Shelby Cobra Daytona coupes, lightweight Jaguar E-Types and Aston Martin DB4 GT/Project cars.

Nevertheless, the 250 GTO persevered once more. The car on offer from RM Sotheby’s clinched that championship for Ferrari with its class win in the 1964 Targa Florio.

Every One an Individual

Every Ferrari 250 GTO has a unique history, and that of course plays a major role in the value. This car, chassis #3413, has quite the story, indeed. It was the third 250 GTO of the lot of 36. All survive today. It is considered to be one of the most authentic and original.

For 1964, Ferrari built three cars with a Series II/GTO 64 body, which featured a more aerodynamic nose and a different roofline. This car was one of three of the earlier cars to be re-fitted with the new body, and one of two to get the 250 LM-style roofline.

GTO #3413 was originally owned and raced by Edoardo Lualdi-Gabardi, whose successes in the car won him the class champion for the 1962 Italian GT Championship. He drove it to class victory in the 1963 Targa Florio. After winning the Stallavena-Bosco Chiesanuova hill climb that year, he sold it to Gianni Bulgari, who drove it to first in class and fourth overall in the Targa. Six months later, he won the Coppa FISA at Monza.

Another privateer, Corrado Ferlaino, bought the car from Bulgari at the end of 1963 and soon after sent it to Scaglietti to get the Series II body. Designed by Pininfarina, this new bodywork was lower, wider and shorter, with a more aerodynamic, steeply raked windshield, larger tires, wider track, and the engine sitting lower.

Like Bulgari before him, Ferlaino’s first race in the car was the Targa Florio, where he won the car’s class and took fourth overall. It was this victory that clinched the GT title for Ferrari, as the factory did not have its own entry in the race.

Dan Margulies, a dealer in London, acquired #3413 next. With David Piper driving, this GTO won the Redex Trophy at Brands Hatch in December 1965, its last in-period victory.

Following a career that included more than 15 class and overall wins, #3413 became one of the most actively campaigned and shown GTOs in vintage racing and concours events. The car has competed with a 250 GT engine built to GTO specs; the original block, stored for preservation, is included in the sale.

Last sold 18 years ago for $7m, this Ferrari GTO exemplifies the model’s great history. It now stands to set yet another record for collector value.