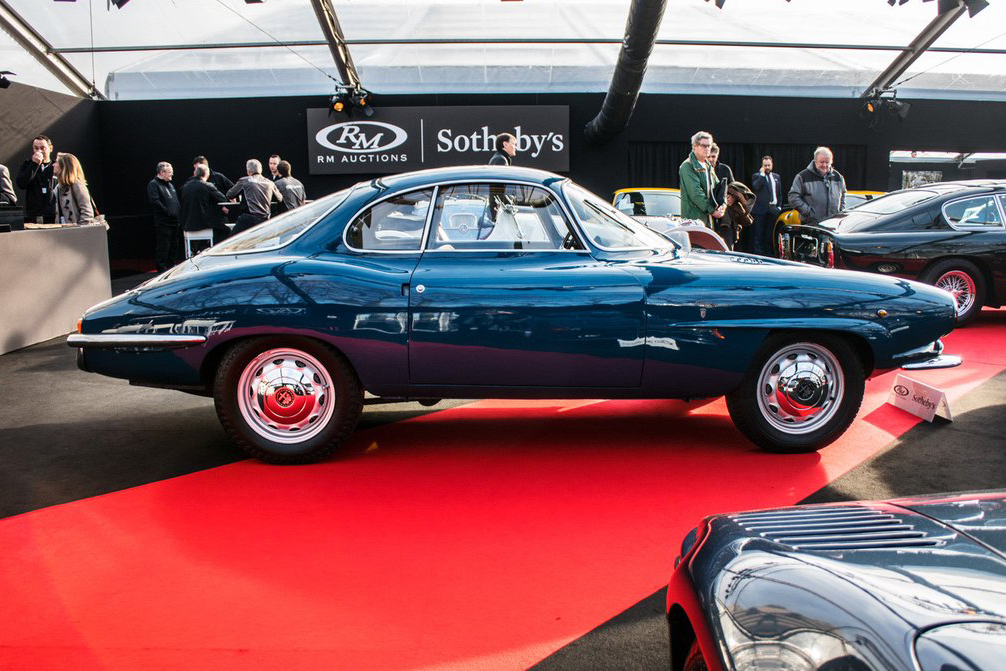 As the Amelia Island, Florida classic car events and successful auctions wrapped up during mid-March, the challenges posed by world events have spurred creative responses to maintain business. For its part, RM Sotheby’shad already been building upon its many live auctions with a greater online experience. The Blenheim, Ontario-based auction house was well-positioned, having already been offering live streaming coverage for years. Plus, a mix of live, telephone, online, and absentee bidding options. As a result, RM Sotheby’s was able to pivot quickly from its normal roster of live auctions to an online-only format. While RM Sotheby’s does indeed have a relatively large staff complement and numerous operational departments, the speed at which the company has transitioned to a succession of online-only auctions is startling.

RM Sotheby’s has several online-only auctions planned as the latest online. However, for this viewing, we have chosen to focus our attention on RM Sotheby’s. For this edition of “Cars to Watch”, is RM’s upcoming Shift/Monterey Online Only auction. Scheduled for August 13-15, it takes the place of one of the cornerstone live events of the original RM Auctions business since the late 1990s. Legions of classic-car fans, collectors, and professionals have participated in Monterey Car Week events each August for decades. It will be very interesting for market watchers to compare sale percentages and prices realized during this year’s online event. At the time of writing, the number of vehicles offered for this Shift/Monterey auction is limited to the handful posted online thus far. However, they are wonderful examples of some of the most perennially desirable collector vehicles spanning Classic Era greats to modern supercars.

The sales representatives from Premier Financial Services have chosen their favorite vehicles listed so far by RM Sotheby’s for the Shift/Monterey Online Only Auction. We hope you will enjoy our coverage of them below.

The 1982 season began with this M1 Procar competing at the Daytona 24 Hours and 12 Hours of Sebring. This was followed by 6 Hour Toyota Grand Prix of Endurance at Riverside, and a second-place podium at Charlotte. Later it won third at the Red Roof Inns Camel GT Sprint at Mid-Ohio. The final race for this BMWM1 Procar with Crevier was the 1982 Coca-Cola 400 at Lime Rock, where Crevier finished fourth in class. This rare and exotic BMW race car was sold by Crevier in 1983 to Don Walker, who also competed with it in several rounds of the IMSA GTO Championship before the car returned to Europe with a Swiss collector in 1987.

Eventually, the car was passed through a Norwegian buyer in 2006 to the renowned specialists at Graber Sportgarage in Switzerland. There, the rare warrior was restored and refinished to its original and highly striking 1981 racing livery. The M1 Procar went on to compete in European vintage-racing events. It likely created a sensation for all who experienced its dramatic styling and unmistakable exhaust note at speed. While the RM Sotheby’s lot description is pending publication, a prior seller of the M1 Procar stated the car’s all-important FIA papers were renewed in January 2017, providing its passport to a multitude of top-echelon vintage racing events virtually anywhere worldwide. If you’ve ever dreamed of racing at Le Mans, Daytona, or Sebring, this 1980 BMW M1 Procar is just the ticket!

Both our Southwest Sales Manager, Michelle Yancey, and West Coast Sales Manager, Juan Garcia, are watching this 1991 Ferrari F40 from the RM Sotheby’s Shift/Monterey Online Only Amelia Island docket. Upon introduction in 1987, Ferrari’s new F40 redefined the modern ‘supercar’ concept. It did this with aggressively purposeful styling and state-of-the-art engineering. Delivering a visceral driving experience with a howling exhaust and razor-sharp reflexes, the F40 was conceived in 1986 to celebrate Ferrari’s upcoming 40thAnniversary, with the F40 the last car inspired by company founder Enzo Ferrari.

Representing a further progression of the competition-intended 288 GTO Evoluzione, the F40 continues to amaze all enthusiasts and collectors in every respect. From its carbon-fiber and Kevlar-reinforced steel spaceframe chassis and composite body panels, to its twin-turbocharged and intercooled four-cam, port-injected V-8 engine producing 471 factory-rated horsepower. Weighing in at just 1,100 kilograms (2,200 lbs.), the F40 was, and remains, a blinding performer. Regardless of the source, the F40 was the quickest and fastest road car ever produced when new. Its performance remains staggering today. According to RM Sotheby’s, this 1991 Ferrari F40 is one of just 213 examples built for the U.S. market. It benefits from recent servicing with less than 6,500 miles of use from new. This makes it a prime collector-grade example of these legendary Ferrari supercars.

Premier’s Southeast Sales Manager, Chris Warren, chose this 1937 Bugatti Type 57C, an unqualified automotive icon. As the 1930s unfolded, a single new chassis, succeeded the firm’s prior multi-model strategy. It was designed under the direction of “Le Patron” Ettore Bugatti’s talented son Jean. Designated Type 57, the new Bugatti was based upon the DOHC engine design of the Type 49. Yet, it was carefully refined by Jean Bugatti. While certainly drawing on the company’s rich traditions, the Type 57 marked an entirely new era. It served both as Bugatti’s primary road model and the foundation for its victorious Grand Prix and Le Mans racing cars until wartime returned to Europe.

History of the Bugatti

Driven by a litany of the prewar era’s wealthiest and most famous personalities, the Type 57 was ultimately available with supercharging as the Type 57C. Serious Type 57 production commenced in 1934 and continued until 1940 along two generally accepted series. The Galibier sedan, Ventoux coach (two-door sedan), and Stelvio drophead coupé comprised the bulk of Type 57 road-car production. It was followed in 1935 by the Atalante Coupé, with coachwork mostly built in Bugatti’s Molsheim coachworks. Some were built in small numbers by Gangloff in nearby Colmar. While the Type 57 was an unqualified success for Bugatti, production only reached 710 examples in all. In addition,, numerous roadgoing and competition variants.

Car-specific details were not yet posted by RM Sotheby’s at the time of writing. However, the company had previously sold this 1937 Bugatti Type 57C Ventoux at its January 2015 Arizona auction. Documented by Bugatti marque experts, it is believed to have been a Bugatti demonstrator at the 1937 Paris Auto Show. Subsequently, it was retained as a factory demonstrator. According to its known history, one of its early drivers was none other than famed Bugatti racer, Pierre Veyron. Former owners include noted collectors Hudson Mills and Bruce Meyer. Continuing to benefit from a concours-quality restoration, this Ventoux was awarded the Elegance in Motion Trophy at the Pebble Beach Concours d’Elegancein 1998.

This 1958 Jaguar XK150 S Roadster is the pick of the RM Sotheby’s offeringsfrom Keith Neelans, our Northeast Sales Manager. Long a collector favorite, the XK150 marks the ultimate development of Jaguar’s revolutionary ‘XK’sports-car series. Debuted in 1957 with updated bodywork and myriad detail improvements, the XK150 was available in either standard or Special Equipment outfitting. By late 1959, the 3.4- and 3.8-liter engines were available in twin- or triple-carbureted “S” tune. Performance increased with top speeds now beyond 130 mph. The XK150 became the first production car equipped with power-assisted four-wheel disc brakes to match its prodigious thrust. A glorious swan song before the E-Type’s 1961 release, the XK150 remains highly attractive and capable today.

This striking 3.4-liter “S” model is likely one of the best-known and most successful in Jaguar circles. Ir is previously reported by Bonhams in 2014 as having a perfect 100-point score. In addition, over 80 Concours wins, and the 2012 National Championship to its credit. This car was an original U.S. delivered example. The ‘XK’ is understood to be one of only approximately 200 cars produced with a close-ratio gearbox and desirable overdrive. While its early years are not documented, the Jaguar is believed to have raced in both the U.S. and Australia. Following discovery by prior owners in Pennsylvania in 1990, it was professionally restored. The restoration included a splendid color change, and rare original features. Plus, numerous fine details sought by knowledgeable collectors.

The Simple Lease from Premier Financial Services takes the stress out of bidding at auction. Premier is your best path to owing any high-end automobile, from leasing a Ferrari supercar from auction to driving it home from the dealer. Preparation is key to getting the car of your dreams. Be sure to check out the many resources we have provided elsewhere on the Premier Financial Services website and contact us today. Representatives from the Premier Financial Services team of vehicle-leasing experts will be in attendance at the RM Sotheby’s Scottsdale auction. They are ready to assist existing and new clients, plus monitor collector-car valuations. Be sure contact us now to prepare to bid from the RM Sotheby’s Shift/Monterey Online Only Auction with confidence and experience our service and advice first-hand.