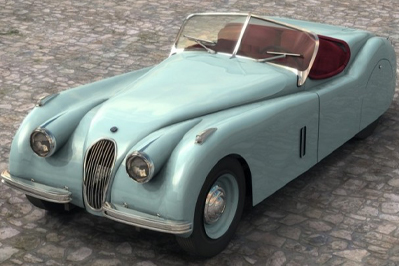 As the collector car market continues to do well, I am repeatedly asked what I believe will be the next car to fall into favor and achieve a large increase in value.  Of course I have ideas from time to time and of course I act on them.  I’m pleased that I chose to purchase a Shelby 289 Cobra last year and am thrilled that I haven’t yet offered it for sale.  In general I don’t answer this question with anything more than “buy what you like because you may own it longer than you intended.”  That answer never gets me off the hook, so I usually reply with the following question: “What do you think is undervalued?”  I listen, then I am invariably asked the same question.  My answer has been the same for the last five years: Jaguar XK120.

When the XK120 was revealed at the Earl’s Court Motor Show in 1948, hysteria ensued.  It was a smash hit.  Jaguar approached the project thinking that if they received enough interest, they might build 250 examples.  By the time the XK120 segued into the XK140 six years later, Jaguar had built over 12,000.  The roadster they launched was later offered in coupe and drophead form.

The fast and sexy sports car was a hit in Hollywood and actor Clark Gable demanded that Charles Hornburg (West Coast Distributor) give him the very first example to arrive on the west coast.  Grand Prix Champion, Phil Hill, owned one personally and won the first Pebble Beach road race in 1950 in an XK120.  Jay Leno credits his first sighting of an XK120 as the match that lit his fire for cars.  The aforementioned Clark Gable XK120 (his first of three) was expertly restored by JD Classics and then went on to win best in class in the Postwar Sports Open category of the 2012 Pebble Beach Concours d’Elegance beating some truly stunning competition.

So, I remain amazed that the market hasn’t moved significantly (upwards) for steel-bodied XK120s that are fast, sexy, capable and eligible for some great events.  One doesn’t to look very hard to find a very nice example and it’s usually priced significantly below the cost of its restoration.  If I were building a collection, I wouldn’t mind owning an XK120 for quite a long time.