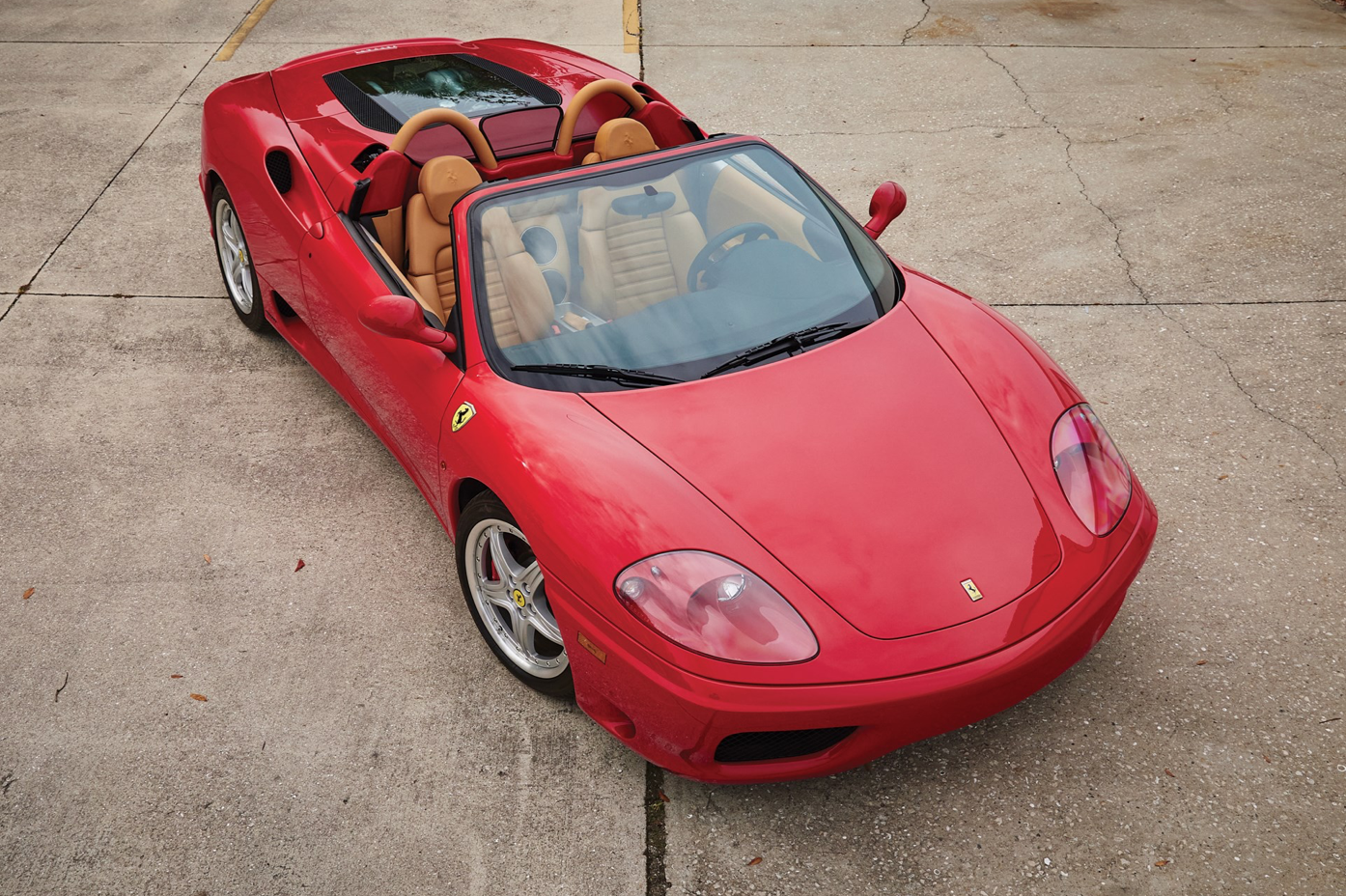 How would you like to drive a classic Ferrari spider – red, naturally, and preserved as near-new – for Toyota money?

Sound too good to be true? Well, there are two caveats. First, the Ferrari in question is a modern classic, the 360 Spider not a 275 GTS. And the Toyota invading its fiscal neighborhood is the Mk. IV Supra, examples of which have lately been selling for more than $100k and as much as $176k.

At its Amelia Island Concours auction in March, RM Sotheby’s will offer a one-owner 2004 Ferrari 360 Spider (the last year for the model) with an F1 transmission and with just 392 miles. The high end of its $125k-$175k pre-sale estimate is about what its base price was when new. 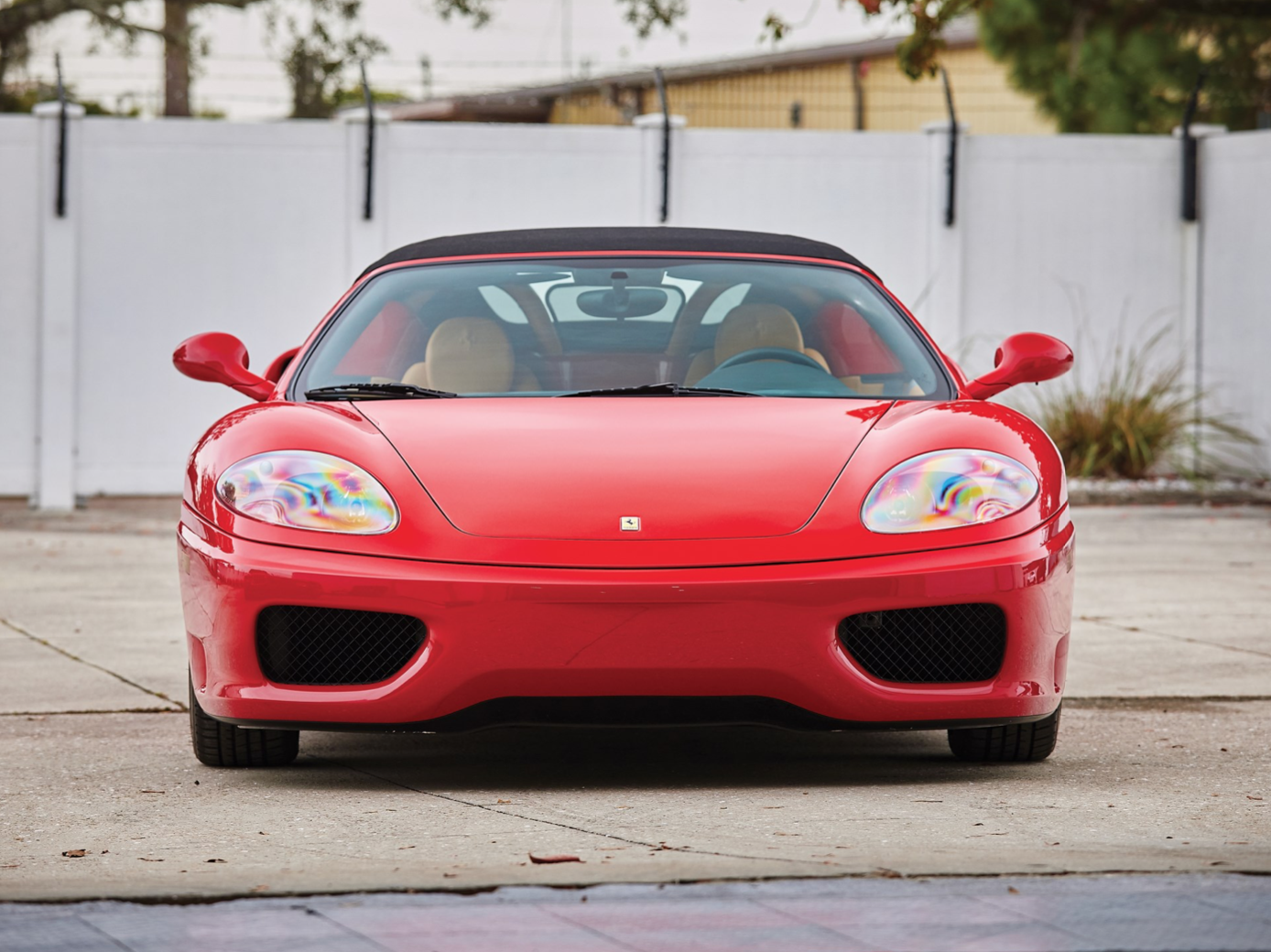 Starting with the 308 series from 1975, Ferrari’s mid-engine V8 sports cars took the marque into volume-production territory (relatively speaking), with no adverse effect on marque exclusivity. As it turns out, there have always been more people who want a Ferrari than can buy a Ferrari.

The 348 series succeeded the 308/328 and was then replaced by the 355, the latter with a 3.5-liter version of the V8. The third “5” in the 355 badge signified and the new cylinder head design with five valves per cylinder (three intake, two exhaust). The jump to the 360 model in 1999 brought far more than an engine with another 100cc in cylinder displacement and 20 more horsepower. The 360 was an all-new car, with an aluminum structure and body versus the steel used for the 355 and its predecessors.

Ferrari called the coupe the 360 Modena. On the other side, the convertible version that arrived the following year was simply the 360 Spider. Both were made until 2004, replaced by the F430. 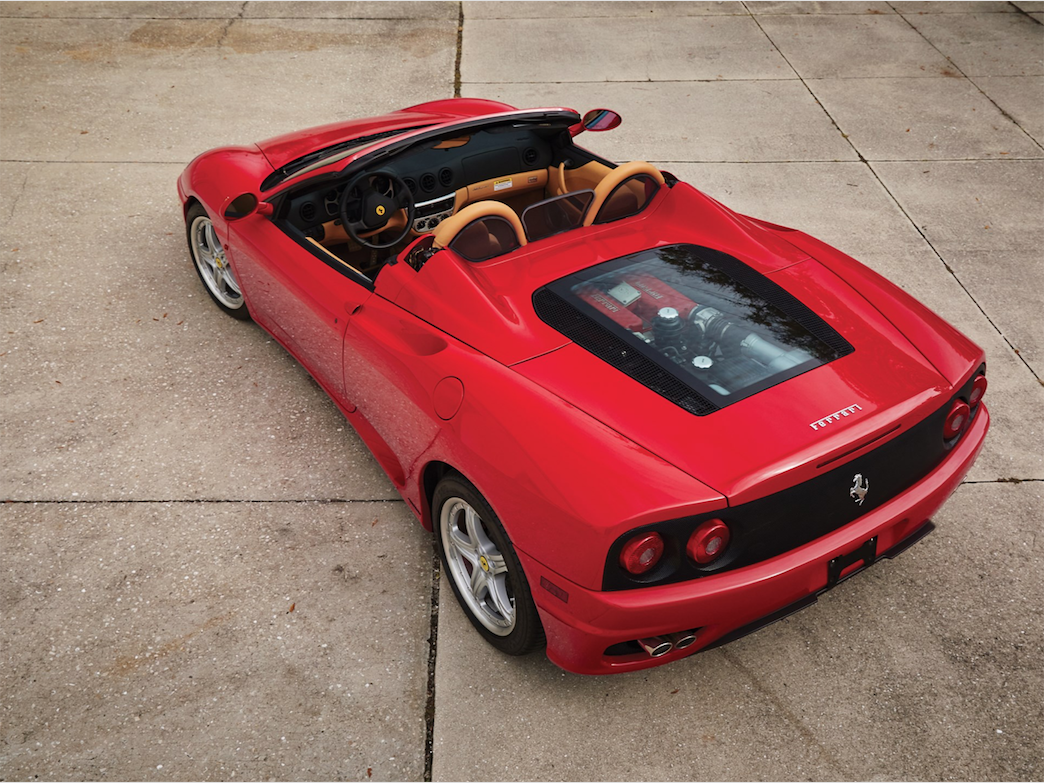 The 360’s curvy Pininfarina design evoked classic Ferrari sports racers and covered an aluminum chassis. While the 360 Modena showcased the V8 under a clear glass panel.

And thrilling it certainly was. The 360’s engine produced 395 hp at a lofty 8,500 rpm and 275 lb.-ft. of torque at 4,750 rpm. Customers could choose between the six-speed manual transmission and the automated six-speed F1. The F1 executed shifts in 150 milliseconds, with flawless rev-matching downshifts.

A 360 could go from rest to 60 mph in just over four seconds. The top track speed approached 175 mph. Accompanying that performance was the unmistakable superbike-like wail of the Ferrari flat-plane crankshaft V8.

In its September 2000 issue, Car & Driver pronounced the 360 Modena F1 the winner in a comparison with the Aston Martin DB7 Vantage and Porsche 911 Turbo.

Said the editors about the 360: “You don’t take a seat in this machine. You snap into the socket, and the juice zaps through your body. What we have here is a machine that never stops expressing itself. And in no case does it whisper.” 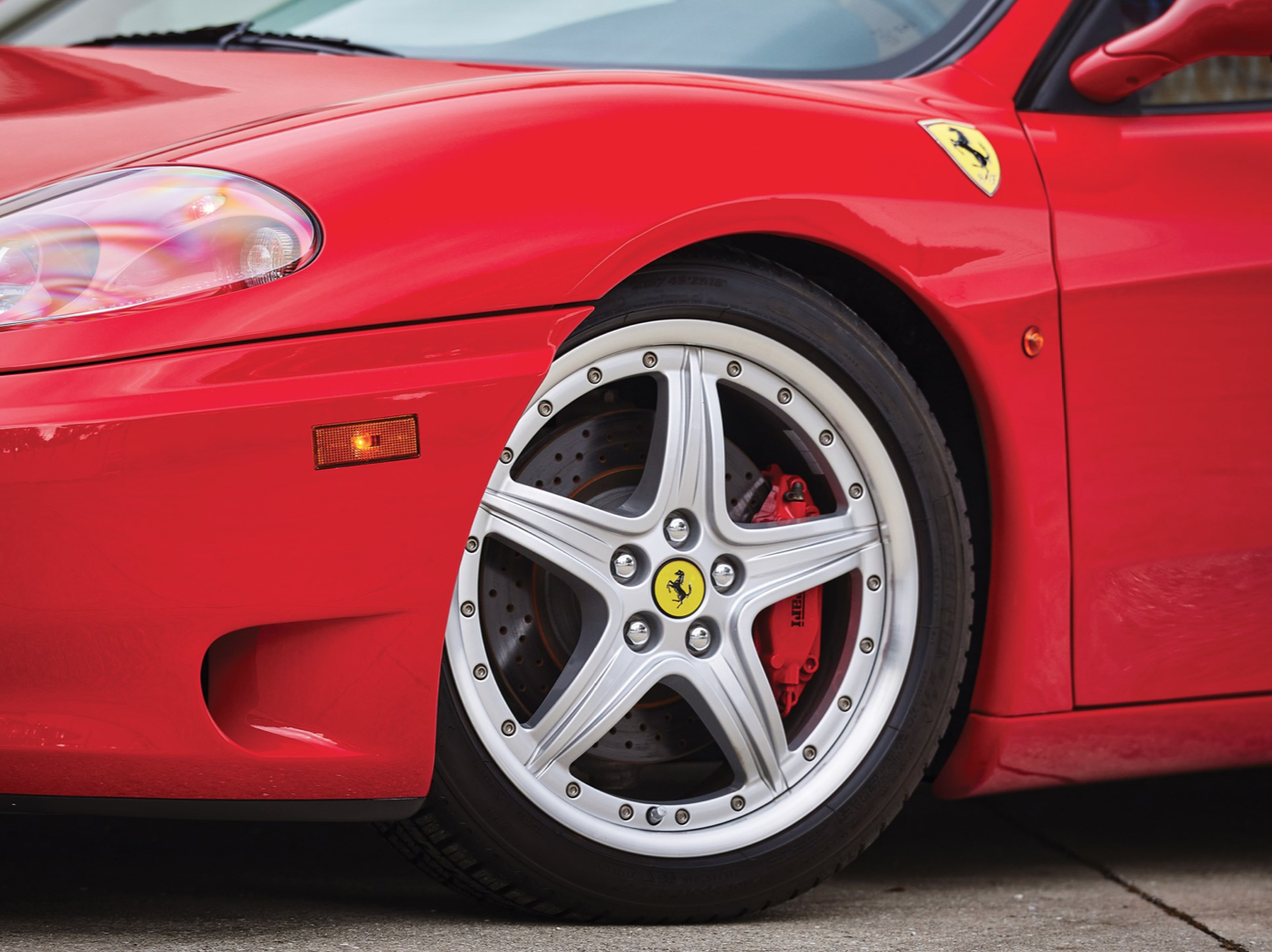 The 360 Spider amplified those sensations, spurring Car & Driver to comment the following year: “Ferrari has somehow taken all the sensory delights from the Modena and transplanted them, undiluted, into the Spider, and then capped the whole deal with a convertible top that proves irreproachable in appearance and operation.”

Speaking of amplification, the magazine went on to rate the Ferrari’s fun factor an 11 on a scale of 10, a cheeky nod to the super-loud amplifiers used by the fictional rock group the 1984 mockumentary, “This is Spinal Tap.”

Car & Driver’s effusive praise for the Ferrari 360 extended to its handling, unsurprisingly, and also to the 360’s everyday usability and comfort. One surprise stunned reviewers: It seems that the Spider’s aerodynamics, combined with mesh wind blockers between the seats, rendered the cabin nearly buffet-free at high speeds.

“The 360’s top-down cockpit comfort is unbelievable,” the magazine reported. “At 125 mph, a sheet of paper sitting on the passenger seat doesn’t even flutter.” 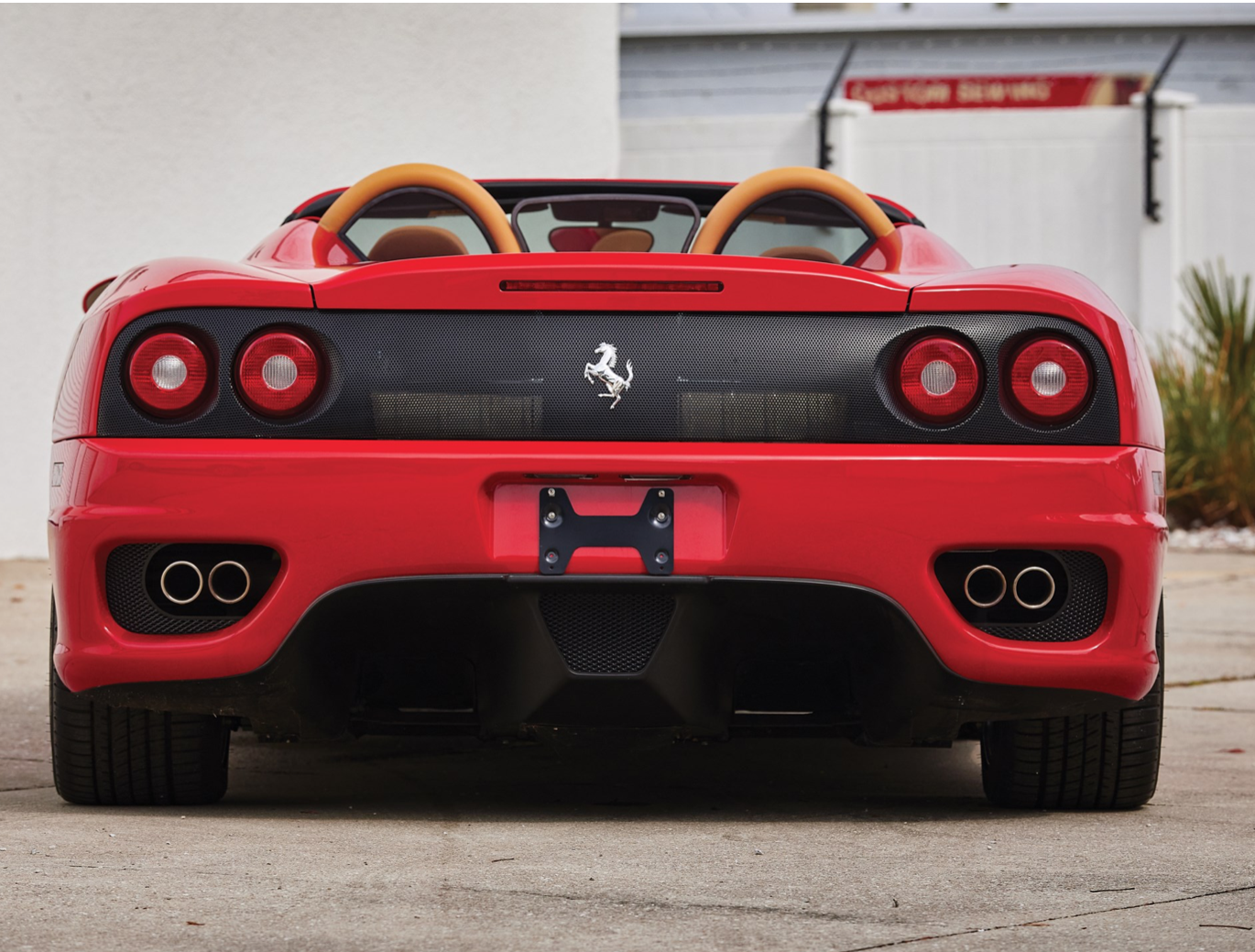 Let’s Do the Time Warp Again

The Ferrari V8 sports cars are certainly not rare. Ferrari made about 17,500 of the 360 series models, about 7,500 of those Spiders. So, yes, you may see another one at the local Cars & Coffee, or maybe even two, depending on your zip code

The Ferrari 360 Spider on offer from RM Sotheby’s is optioned with Scuderia shields, modular wheels, red brake calipers, and power seats. Adjusted for inflation, this super-low-mile example could be a better deal than traveling back in time to buy a new one.