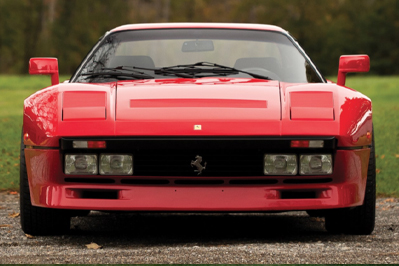 Last of the Killer B’s

Reviving revered classic car names has become quite the successful marketing tactic, including in Maranello. But when Ferrari brought back “GTO” in 1988 after a 24-year hiatus, it was no mere nostalgia play.

The 1984-1987 288 GTO was a true Gran Turismo Omologato, a race homologation special. Call it a case of bad timing, but before Ferrari was able to produce the requisite number of cars for FIA Group B competition, the sanctioning body killed the class. The 288 GTO never raced, but instead became the start of a Ferrari supercar dynasty that yielded the F40, F50, Enzo and LaFerrari.

At its Scottsdale auction this month, RM Sotheby’s will offer a 1985 Ferrari 288 GTO originally sold in the U.S. but rarely driven. The car shows less than 2,900 miles after passing through the hands of several collectors. The pre-sale estimate is $3.2m-$3.6m.

It takes just a few judiciously written racing regulations to spawn mayhem. The Can-Am series of the late 1960s and early 1970s comes to mind. The FIA Group 7 rules essentially formalized a kind of run-what-you-brung free-for-all that unleashed such beasts as the Porsche 917/30 with 1,200+ horsepower pushing 1,800 pounds. Fun times.

In the 1980s, the FIA scored again with its Group B classification, which allowed manufacturers to homologate dedicated rally cars by building just 200. Group B was further broken down into classes for power and minimum weight, and turbos were allowed. Well, things got a little crazy, and soon there were truly pumped-up ferocious turbocharged machines, including the Audi Quattro, Lancia 037 and Delta S4, Ford RS200 and Renault 5 Turbo, tearing up the rally circuit.

Ferrari and Porsche both took aim at the top class, which allowed up to 2,857cc engine displacement with turbocharging or up to 4 liters naturally aspirated. Both marques chose the turbo route, which yielded the Ferrari 288 GTO and Porsche 959.

The high-powered Group B racecars yielded dangerous and even deadly consequences, and the FIA shut down the category after the 1986 season. The nickname of the cars – “killer B’s” – was no joke. Neither the Porsche 959 nor Ferrari GTO ever raced in the class but instead went on to become production supercars.

As Porsche started with a 911 core to create the 959, Ferrari used the 308 GTB as a basis for the 288 GTO. There’s not much in common between the two. Ferrari stretched the wheelbase of the tubular chassis 4.3 inches to fit the DOHC V8 longitudinally rather than transversely.

Fortunately, the added length of the 288 GTO only enhanced its aggressive stance rather than creating odd proportions. The large flared wheel arches were needed to accommodate the larger wheels – 8-in. wide in front and 10-in. wide in back. Larger spoilers were fitted fore and aft, the designs dictated by extensive wind tunnel testing.

The rear quarters featured three cooling slots behind the wheel. Plus, a functional and visual homage to the 250 GTO of the early 1960s. Viewed in profile, there’s also a hint of the original 250 GTO seen in kicked up spoiler lip. The doors, trunk lid and engine-lid were crafted from aluminum, with fiberglass for the fenders, Kevlar for the front hood, and Kevlar/carbon fiber for the roof. Weight was 2,557 pounds, and those were real, verified homologation pounds, rather than Ferrari marketing department wishful-thinking pounds.

Dawn of a Ferrari Supercar Era

The Tipo F114B engine began, too, with the 308. However, the cylinder bore reduced by 1mm to meet the FIA displacement limit. Ferrari had already built its first production turbo engine a few years before to give the Euro-market 208 models a boost from their pathetic 155 hp. The 288 GTO used a different setup. Starting with four-valve (Quattrovalvole) heads, it employs Weber-Marelli electronic fuel injection, twin IHI turbochargers and dual Behr intercoolers.

The result was 400 horsepower, highest to that point for a Ferrari V8 road car. The 5-second 0-60 time and 14.1-second quarter-mile (Road & Track results) clobbered the 308 GTB . However, it might seem less than you might expect for that weight-to-power ratio. Consider more closely the 113-mph quarter-mile trap speed and, as tested by Ferrari, the 189-mph top speed as better indicators of the car’s high-end power.

Demand for the 288 GTO spurred Ferrari to surpass the Group B homologation requirement of 200 cars, making a total of 272 examples. The price in Italy was about $84,000. By then, of course, Ferrari was already developing a car to commemorate the marque’s 40thanniversary. Consequently, Ferrari applied much of what was learned developing the 288 GTO to the F40.