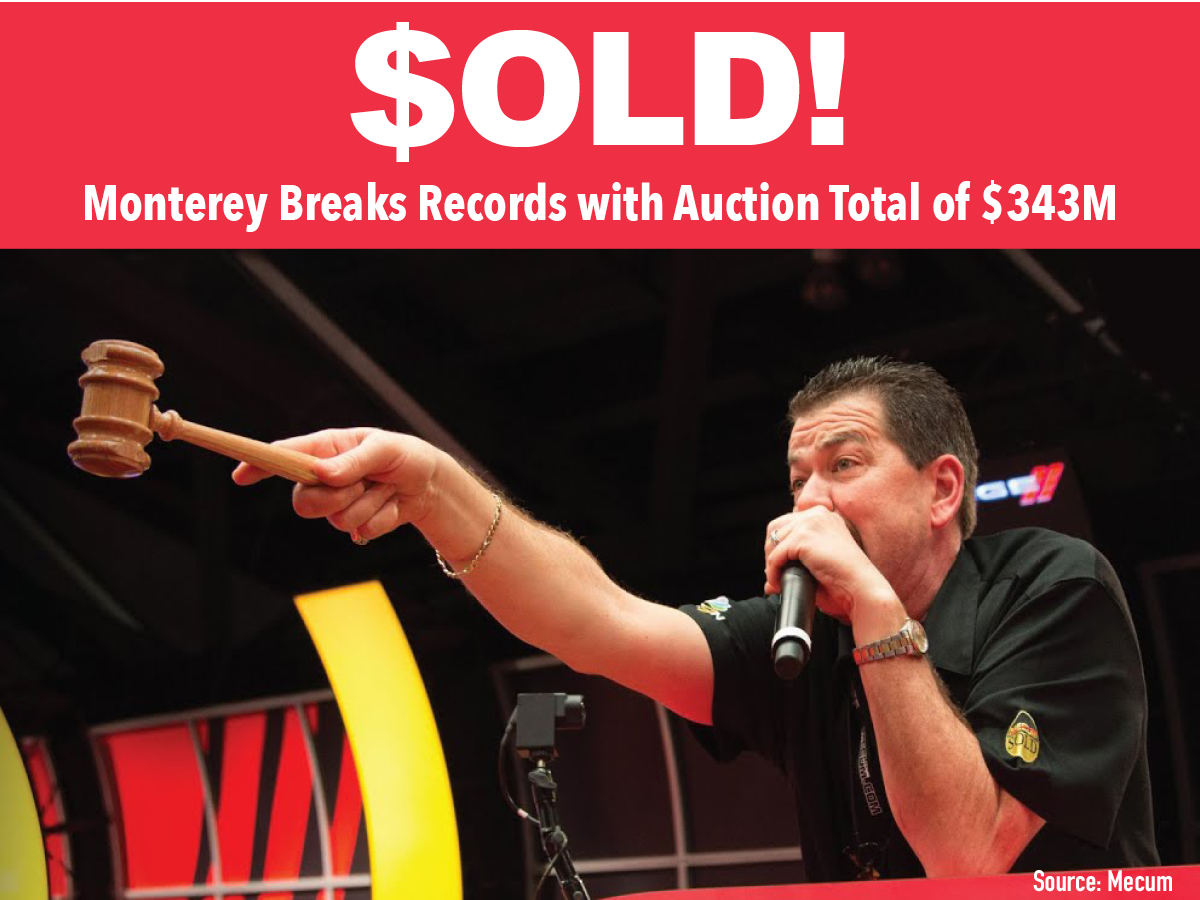 Live auctions return to the peninsula in a huge way

By all accounts, the 2021 Monterey auctions were, collectively, a blow-out, with an estimated sale total of $343M. That was a whopping 37-percent increase over 2019 – yet with 25-percent fewer cars, according to the experts at Hagerty. (There were no live auctions for Pebble Beach in 2020, due to Covid restrictions.) The overall sell rate was 80 percent, versus 59 percent in 2019. Another fun stat from Hagerty’s auction team: 82 cars sold for more than $1M, compared to 45 in 2019. It was a good time to sell a car.

The return of the live auctions likely played a role, as it has been doing since the spring. Though online bidders were part of the Monterey sales, the exciting effect of being surrounded by the cars and competitive bidders cannot be replaced with computers.

The analysts at Hagerty concluded that the main driver of higher sales at Monterey, however, was a better selection of cars. Part of that means cars that have not been circulating through auctions over the past few years.

Let’s go to the biggest news: The weekend’s top sale occurred at the Gooding & Company Pebble Beach auction: a 1995 McLaren F1 that brought a stunning $20,465,000. The pre-sale estimate was “in excess of $15M.” The car, one of just 64 McLaren F1 road versions built, is essentially a museum piece, with just 390km (242 miles) on its odometer. It had been delivered new to a customer in Japan but was later purchased, federalized and U.S.-titled by an American collector.

The second-highest sale occurred at RM Sotheby’s sale, a truly magnificent 1959 Ferrari 250 California LWB Competizione Spider that sold for $10.84M. Classic Ferraris accounted for half of Monterey’s top-10 sales this year, repeating a common occurrence at the event.

Pre-WWII cars have been hot this year, and they did not disappoint at Monterey. Gooding & Company sold a 1929 Bugatti Type 35B Grand Prix Roadster for $5.615M, a record for the model. The top sale at the Bonhams Quail Lodge sale was a 1928 Mercedes-Benz 26/120/180 S-Type Sports Tourer for $5.395M. The dashing Mercedes proved to be a surprise, easily blowing past its $3M-$4M pre-sale estimate.

Not in the top-10 but also noteworthy, was Mecum’s sale of a 1929 Duesenberg Model J Murphy Convertible Sedan for $2.365m.

Many collectors had been watching the 1970 Porsche 917K offered by RM Sotheby’s as a potential top sale. Estimated to sell for $15M, this iconic racer instead remains available, with price by request. Another no-sale historic racecar was the 1966 Ford GT40 offered by Gooding & Company, one of two Alan Mann Lightweights built. It was estimated to bring $7M-$9M but remained available with a $7M asking price.

One of Premier’s preview cars, the 1956 Maserati A6G/54 by Frua offered by Gooding & Company, failed to sell and remained available with a $2.5M asking price.

While nothing came close to the McLaren F1, there were some other modern supercar surprises. Mecum’s top sale was a 2014 Ferrari La Ferrari with just 131 miles, which sold for $3.41m.

RM Sotheby’s set a new record for a Japanese car with a 2012 LFA Nurburgring Package model, which selling for $1.6M. The car was one of one of 25 U.S. market Nürburgring Package versions. Another LFA, one that had been enjoyed for nearly 4,000 miles, sold at the same auction for $819k, a healthy jump over its $500k price new.

And, how about a record-setting Porsche 911? Bonhams sold a unique 1997 911 Turbo S for $654k, said to be a record for a 993-series 911. It had been ordered new by noted collector Otis Chandler, who had it highly optioned and painted-to-sample. Chandler’s “sample” was the color scheme of Mark Donahue’s Sunoco-sponsored, Penske run Porsche 917/30 that dominated the 1973 Can-Am season.

We selected four cars for deep-dive previews before the auctions. How did they do?

For major auctions, we ask staffers to select cars they believe will do well. How did they do?

Michelle Yancey, Premier Financial Services’ Southwest Sales Manager, and who has a soft spot for Ford-powered fastbacks, had her eye on a sleek and sophisticated 1971 AC 428 Fastback. It sold for $173,600.

The staff members at Premier’s corporate headquarters in Woodbury, CT chose a 2001 Ferrari 456M GT. It was one of the Ferrari bargains of Monterey, selling for $106,400.

Chris Warren, Premier’s Southeast Sales Manager, chose a captivating 1928 Bentley 4.5-liter, one of the adventurous icons from the marque’s early years. It remained available with an asking price of $1.15M.

Premier’s Southeast Sales Manager, Chris Warren, had his eyes on a gorgeous 1961 Aston Martin DB4GT, one of the  “Sanction II” continuation cars. It went home with a new owner for $2.755M.

A 2003 Lamborghini Murciélago, one of 424 made that year, was selected by Keith Neelans, Premier’s Northeast Sales Manager. It brought $445k.

The home office team in Connecticut chose the iconic 1966 Shelby GT350H, one of the famous Hertz “rent a racers.” This one was extra special, being one of the 85 built with the four-speed manual. It sold for $280k.