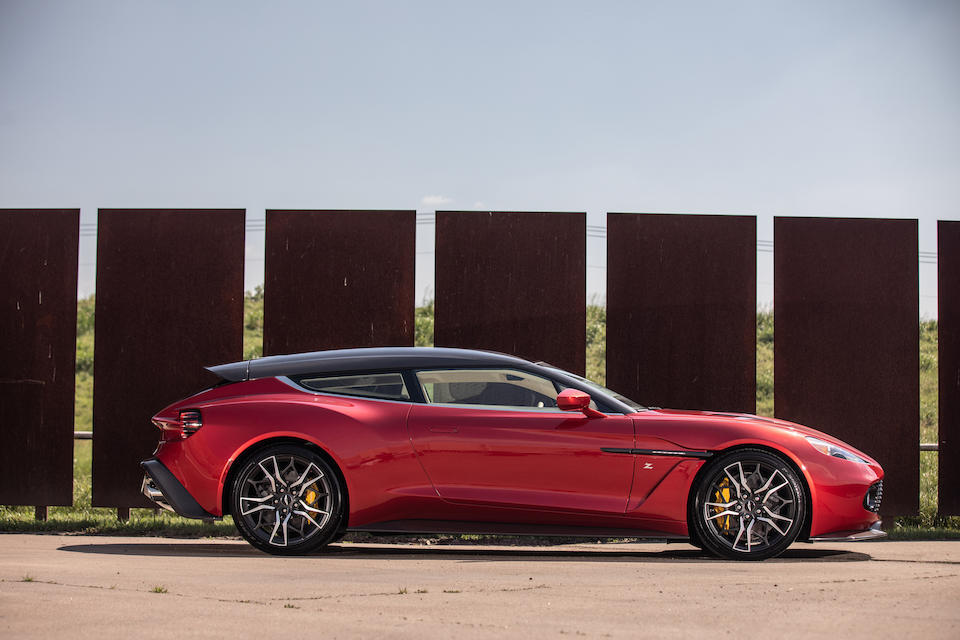 For anyone who thought the age of coachbuilt designer automobiles had long past, Aston Martin offers copious evidence to the contrary. If we define “coachbuilt” for modern cars as an ultra-limited version of an already limited-production model, then the Aston Martin Vanquish Zagato Shooting Brake surely qualifies.

This special quasi hatchback-wagon was the last of four Aston Martin Vanquish Zagato models made from 2016-2019. The others being the Coupe, Volante (convertible) and topless Speedster. Aston Martin made just 28 Speedsters and 99 each of the others.

At its 2022 Quail Lodge auction in Monterey, CA, Bonhams is offering the 25th Vanquish Zagato Shooting Brake made. It is one of a “handful” imported to the U.S., according to Aston Martin. (On its website, Aston Martin of San Diego says 13 were brought to the U.S.). Moreover, the pre-sale estimate for the car, which has under 60 miles from new, is $600k-$800k. Further, that could be quite a discount from its $917k dealer sticker price.

Aston Martin’s first production collaboration with renowned Italian design house and coachbuilder Zagato was the 1961 DB4 GT Zagato, with just 19 or 20 built. The two renewed their relationship for the 1989 Aston Martin V8 Vantage Zagato, which, truth be told, was far less appealing than the production model. Just 89 were made.

The 2003 DB7 Zagato was a stunner. However, because that car was unable to meet U.S. certification, Aston Martin built the DB AR1 Zagato exclusively for this market. Here again, 99 were made. The 2012 Aston Martin V12 Zagato broke the “99” rule with 101 made.

Give Me A (Shooting) Brake

Though it may sound to some like a term conjured by the Monty Python’s Ministry of Silly Car Names, “Shooting Brake” has some history to it. This peculiarly British term traces back to a type of horse-drawn carriage that was used to transport hunting parties, their gear and eventual quarry.

British carmakers used the term for some 1920s and 1930s cars that were custom-built for the same purpose. However, the archaic “shooting brake” term later gave way to “estate car.” That’s “station wagon” to us Yanks, mate.

Aston Martin revived the old term in the mid-1960s, when the factory constructed a long-roof version of the DB5 for company head David Brown, who was a hunter. A Land Rover might have made much more sense for such activity. But, perhaps Brown wanted to give his dead ducks a stylish ride to the taxidermist.

Subsequently, British coachbuilder Harold Radford made about a dozen more. In 1992, Aston Martin offered a “shooting brake” conversion of its Virage coupe and found about a half-dozen takers.

Auto media still like to use this term for long-roof coupes and two-door sport wagons.

By that definition, the category would include the ’55-’57 Chevy Nomad, the 1972-1973 Volvo 1800ES (and very similar Reliant Scimitar GTE in England), the late ’90s BMW Z3 coupe and more recent Ferrari FF and GTC4 Lusso and Hyundai Veloster. Further, even the early ’70s Chevy Vega Kammback and Ford Pinto wagon could join the club.

As on the other Vanquish Zagato models, all of the Shooting Brake’s body panels are made from carbon fiber. The elongated roof sweeps downward at the rear to meet the upswept rear quarters. The roof’s “double-bubble” profile – a feature that helped clear race drivers’ helmet-clad heads in racecars decades ago – features glass inlays. Aston Martin says the taillights were inspired by its own Vulcan model’s “blade” style lights. However, some might also see a bit of 1950s Detroit car styling in them, too.

With just 60 miles showing, the Aston Martin Vanquish Zagato Shooting Brake offered by Bonhams essentially remains a new car. Further, the Hyper Red color is complemented by a Coral Sand leather interior. The car was equipped with options costing nearly $70,000, with a carbon fiber luggage floor alone accounting for nearly a third of that.