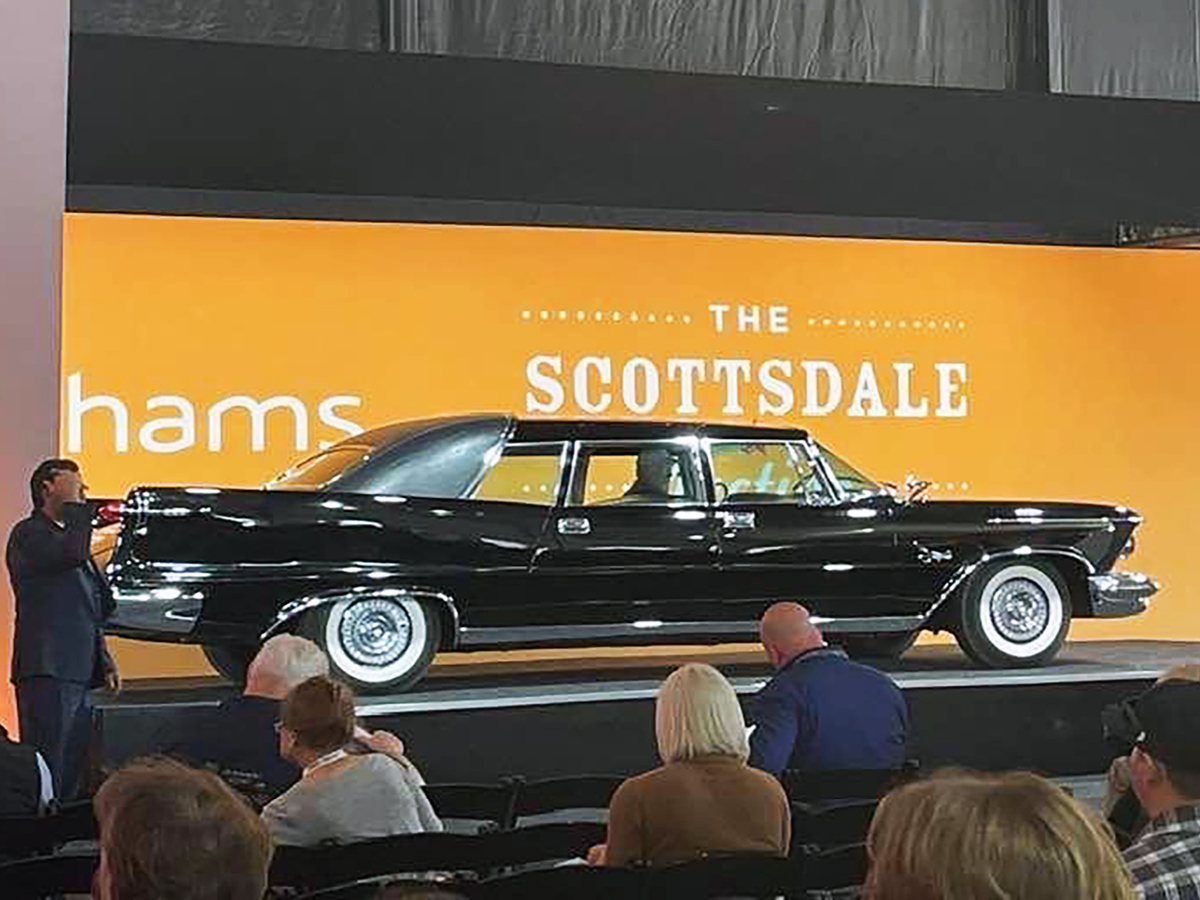 One of only 29 alloy body Mercedes Gullwings gets $6.8 million

The Scottsdale auction landscape served up some changes and surprises for 2022, including RM Sotheby’s switching to a one-day sale (from two) and Gooding & Company’s auction being online-only. The biggest numbers came from pre-war Duesenbergs and post-war Mercedes sports cars. Here are the results:

The one-day auction generated $43.3 million in sales with a 95% sell-through rate, reflecting 65 cars sold out of 69 offered. But the whopping number from this auction that will have collectors buzzing for quite a while – at least until The Amelia auctions next month – was $6.8M for an uber-rare 1955 alloy-body Mercedes-Benz 300 SL Gullwing.

Though sliding in just under the $7 million – $9 million pre-sale estimate, the price was the highest ever paid for an alloy-body Gullwing. The previous record for an alloy-body 300SL was $4.62 million at Gooding & Company’s Scottsdale auction 10 years ago. That was also the last one of its kind sold at auction until now, according to Hagerty auction editor, Andrew Newton.

Of the 1,400 Gullwings made, just 29 were the alloy-body models, which had been intended for privateer racers. Where the standard Gullwing used aluminum for the hood and trunk panels, rocker panels and door skins, the “alloy body” was fully aluminum. Plexiglas windows were also used, and the net result was a 170-200 pound reduction, bringing the car’s weight to about 2,700 pounds.

The option also equipped the 3.0-liter inline-six with the “sport camshaft” and other tweaks, as well as different suspension tuning, vented front brake drums and Rudge center-locking wheels. This alloy Gullwing had been restored by marque specialist Paul Russell in the late 1970s for the then-princely sum of $45,000. Two other 300 SL models made RM Sotheby’s top-10: a 1964 Roadster, the third-to-last ever built, brought $2.3 million, and a standard Gullwing sold for $1.71 million.

Second in the top-10 was a pre-WWII gem, a 1931 Duesenberg Model J Tourster with coachwork by Derham. The fourth of just eight authentic examples built, the Duesey sold for $3.4 million, exceeding its pre-sale high estimate. This CCCA Full Classic was restored by RM Auto Restoration and said to retain its original chassis, engine and body. The car took a class win at the Pebble Beach Concours d’Elegance, and among its previous owners was racer Andy Granatelli.

For the car in the tenth position, playing something from Donna Summer seems like an appropriate soundtrack. The 1988 Cizeta-Moroder V16T was the result of a partnership between former Lamborghini engineer Claudio Zampolli and, as the key investor, influential music producer Giorgio Moroder, who produced Summer’s biggest hits.

This was the prototype of the mid-engine supercar. Its V16 engine was based on the Lamborghini Urraco V8, and Lambo Countach designer Marcello Gandini sculpted the audacious body. The partnership collapsed after this car was built, and 11 cars that followed did not carry Moroder’s name. The sale of the car included an NFT package with music and artist renderings of the car. The buyer got it all for $1,363,500.

It’s worth mentioning that a 1994 Porsche 911 Turbo S Flachbau (flat nose) that sold for $1.325 million, in 11th place, could be counted among the top-10 when accounting for the tie mentioned above.

Bonhams returned to Scottsdale with a live auction after 2021’s sale had a late change to online bidding only. This year, the auction house brought 89 cars, compared with only 32 last year.

The top sale spot went to a car you don’t see very often, but you do see plenty of its Ford-powered cousins. Selling for $516,500, the silver 1958 AC Ace would become the basis for the AC Cobra built in collaboration with Carroll Shelby a few years later. This aluminum-body Ace was one of 266 built and special-ordered with left-hand drive by an American airman stationed in Europe. The four-owner car, which had gone through a comprehensive restoration, easily zoomed past its $375,000 pre-sale estimate.

In the second spot was a “barn find” liberated from a New Jersey garage after several decades in storage, a 1953 Mercedes-Benz 300S Roadster that brought $472,500. It was described as a “perfect canvas for a comprehensive restoration.”

The third spot went to a 1997 Porsche 911 Turbo S, the ultimate road version of the air-cooled 911, selling for $467,000. This generation 911 Turbo was the first equipped with all-wheel drive, and the “S” boosted horsepower to 424 up from the standard model’s mere 408. The Bonhams car was one of just 183 produced for the U.S. market, and its original window sticker showed a price of $157,561. Although the car’s consignor added just 41 miles in 14 years of ownership, owners before him enjoyed driving this machine, putting on 14,000 miles.

Also of note, the sixth and seventh places on the list both went to 1962 Aston Martin DB4 Series II coupes, with selling prices separated by a mere $2,750.

Gooding & Company conducted its Arizona auction purely through its Geared Online platform, reporting a sales total of $6,962,450, with an 88% sell-through rate, from 50 of 57 lots sold. The top sale was the 1961 Maserati 5000 GT “Shah of Persia” with coachwork by Carrozzeria Touring, which sold for $924,000 — just slightly above the high end of its estimate.

Landing in seventh place on the top-10 was perhaps the most unusual car (in a good way) to sell in Scottsdale, a 1937 Cord 812 Westchester sedan that brought $275,000. That was $100k above the high end of the estimate and a whopping three times the estimate for a concours-condition stock model, according to Hagerty.

Some purists might charge heresy against this particular example, as it was a “resto-mod.” While preserving Gordon Buehrig’s masterpiece design and the Cord’s innovative front-wheel drive layout the car was modernized with an aluminum Chevy LS1 V8 and an older Porsche 911 Tiptronic transaxle. It was further outfitted for modern driving with four-wheel independent suspension and four-wheel disc brakes. All of that was hidden by a restored-to-stock body and interior. We hope this one gets plenty of drive time.

Worldwide Auctioneers sold 82 cars for $10.5 million. Four of the top-10 were pre-WWII beauties, starting with the Pebble Beach award-winning 1929 Duesenberg Model J Berline that sold for $2,260,000. The car was described as having its original chassis, body and engine.

Second spot went to the only other car in this auction to break into seven figures, a stunning 1935 Delahaye 135M Competition Drophead Coupe for $1,435,000. A 1932 Chrysler Imperial came close at $940,000. Showing the continuing strength of the Duesenberg market, the fourth-spot went to a fully rebuilt and restored Model J engine for $775,000 – yes, just the engine. A very different kind of American muscle took fifth on the top-10, a 1970 Dodge Challenger R/T Hemi coupe for $329,500.

We look forward to seeing our clients and friends at The Amelia Island Concours d’ Elegance and auctions in just one month.