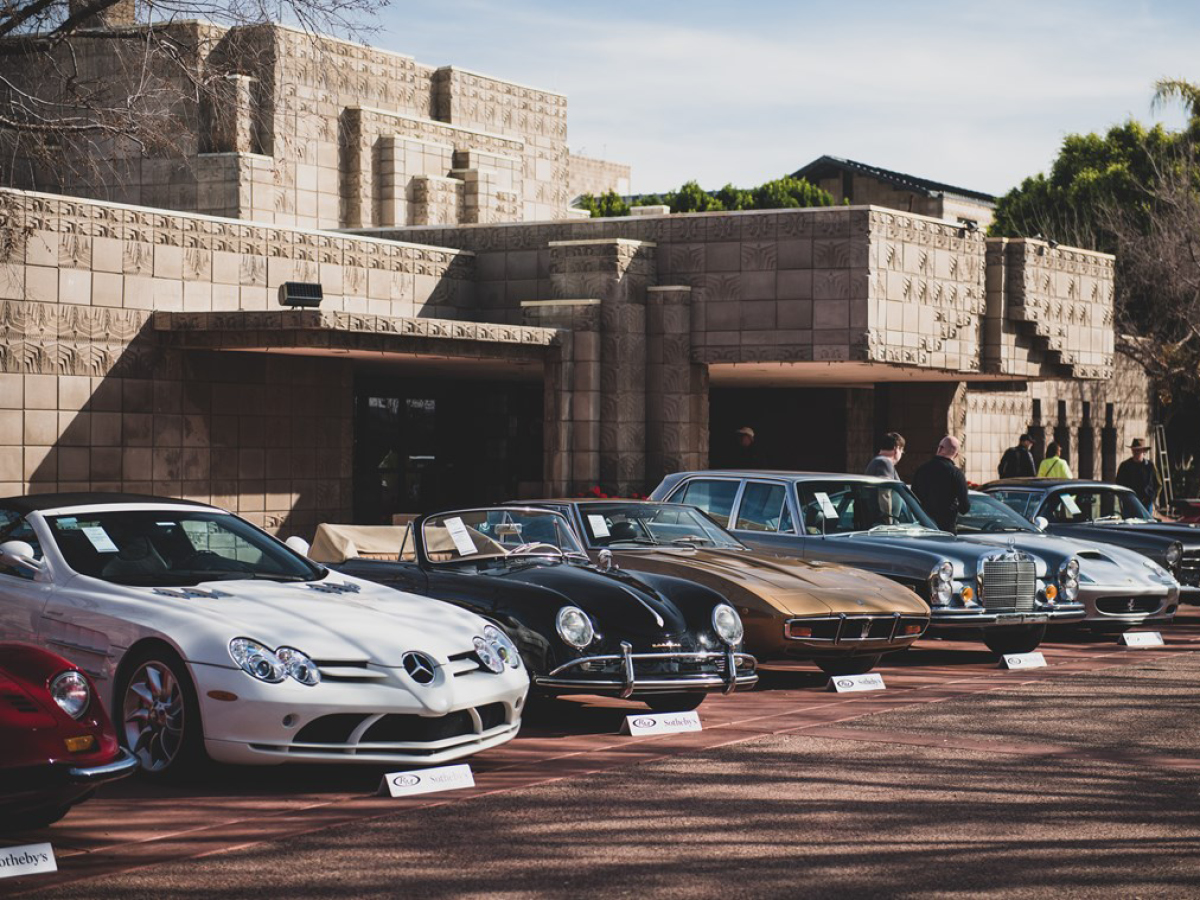 After rolling out its online-only Open Roads auctions during 2020 and a hybrid live/online event last year during the annual January auction week in Arizona, RM Sotheby’s will return to its traditional venue, the Arizona Biltmore near Phoenix, this year to host its Automobiles of Arizona live auction.

Slated for January 27th with previews starting at 9:00 a.m. and the auction beginning at 7:00 p.m., this year’s edition of Automobiles of Arizona will be the Canadian-based auction house’s 23rd Arizona sale. Approximately 80 lots will be offered in all, including several pieces of art and collectibles, a jewel-like 1958 Quarter-Midget racing car, and a miniature Jaguar D-Type. Automotive lots span 1927 through the present.

As in past years, the team of sales representatives from Premier Financial Services have chosen their favorite vehicles to be offered by RM Sotheby’s in Arizona and as anticipation builds, we hope you will enjoy our pre-auction coverage. Be sure to contact us today to discuss our flexible options for a confident and enjoyable bidding experience.

Ross Dressel, Premier’s Midwest Region Sales Manager, has selected Lot 132, a “modern legend” 1997 Porsche 911 Turbo S. As Ross relates, “The 993 was the last of the air cooled Porsche 911 models. The Turbo S benefited from the many technical achievements of the 959 – my absolute dream car, in terms of technology, including the AWD system. Other revolutionary items included the hollow-spoke wheels, which drew from nature and mimicked the strong, yet lightweight bone structures of birds. With only 182 examples of the Turbo S ever made, this is truly a collector vehicle to be enjoyed and appreciated, not only for its collectability, but also for its potential for price appreciation over time!”

Our Southwest Sales Manager, Michelle Yancey, chose Lot 118, a 1981 De Lorean DMC-12, one of the most readily-recognized Sports/GT cars of all time. It’s no wonder, considering the starring role enjoyed by the DMC-12 in the 1985 smash hit movie, Back to the Future, which captured Michelle as a girl who came of age in the 1980s. A virtual time machine, thankfully without the movie car’s Flux Capacitor, this De Lorean is a two-owner example with just 174 miles from new at time of cataloguing, according to RM Sotheby’s. Sold new in Canonsburg, Pennsylvania, it features the driver-preferred five-speed manual transmission and includes irreplaceable original documents and even a rare De Lorean roof rack – still sealed in the factory box.

Premier’s Southeast Sales Manager, Christopher Warren, chose Lot 114, a charismatic 1994 Bentley Continental IV Convertible. According to Chris, “I’ve always loved the rarity of this model, going back to the days when I worked for a Rolls-Royce & Bentley dealership.” A well-presented final iteration of the classic open-top Continental, this example is ultra-rare as one of seven produced in 1994 and it is the only one painted black. Delivered new to Indiana, its original MSRP was $268,200. Powered by a hand-assembled 6.75-liter V-8 engine paired with a four-speed automatic transmission, this Continental has only 15,100 reported miles from new and it marks a fabulous opportunity for bidders to acquire a modern Bentley classic.

Attracting the attention of Juan Garcia, our West Coast Sales Manager, this 1955 Mercedes-Benz 300 SL “Gullwing” coupe is an unqualified sporting legend. The 300 SL is immensely collectible and, as Juan advises, “While it is certainly great to look at, it is even better to drive,” making it an ideal acquisition for confirmed collectors. Catalogued as Lot 129, this early-production example is advertised by RM Sotheby’s as the sole 300 SL Gullwing known to have been finished in Dunkelgrau (Dark Gray) with red Tartan-pattern seats. Restored in its striking factory colors in 2015, this 300 SL is understood to retain its numbers-matching engine and comes with a lengthy history of known ownership. A set of factory-correct, color-matched luggage is included, along with documents including a factory Wagenkarte (Data Card) copy, restoration invoices, and maintenance paperwork.

Lot 143, this awesome 2005 Porsche Carrera GT, is the pick of Keith Neelans, Premier’s Northeast Sales Manager, who appreciates this fierce performer as “…one of the last great analog supercars ever built – a true driver’s car.”  According to RM Sotheby’s, it is one of only 644 U.S.-delivery Carrera GTs, in original condition with fewer than 5,500 miles of use at the time of cataloguing. Attractively finished in GT Silver Metallic over Ascot Brown leather upholstery, this Carrera GT is accompanied by excellent documentation and an optional seven-piece fitted luggage ensemble.

For their part, the staff at Premier’s Corporate Headquarters in Woodbury, Connecticut are collectively watching Lot 126, a rare 1963 Apollo 3500 GT Coupe.  The fifth of 41 examples built by International Motor Cars, the original Apollo manufacturing concern, it is also the first of four examples known to have left the company’s Oakland, California workshops with an automatic transmission. Believed to retain the original 3.5-liter Buick aluminum V-8 engine, this Apollo continues to benefit from a top-notch restoration during the early 2010s. A multiple Concours d’Elegance winner, it was also featured in Automobile magazine and comes with a wealth of documents correspondence, and marque literature.

A Simple Lease from Premier Financial Services takes the stress out of bidding at auction. Premier is your best path to owing any high-end automobile, from leasing a Ferrari from auction to driving it home from the dealer. Preparation is key to getting the car of your dreams, so be sure to check out the many resources we have provided elsewhere on the Premier Financial Services website and contact us today. Representatives from the Premier Financial Services team of vehicle-leasing experts will be in attendance at the RM Sotheby’s Scottsdale auction, ready to assist existing and new clients, and monitoring collector-car valuations. Be sure to contact us now to prepare to bid with confidence during RM Sotheby’s Scottsdale 2021 auction and experience our renowned blend of service and advice first-hand.