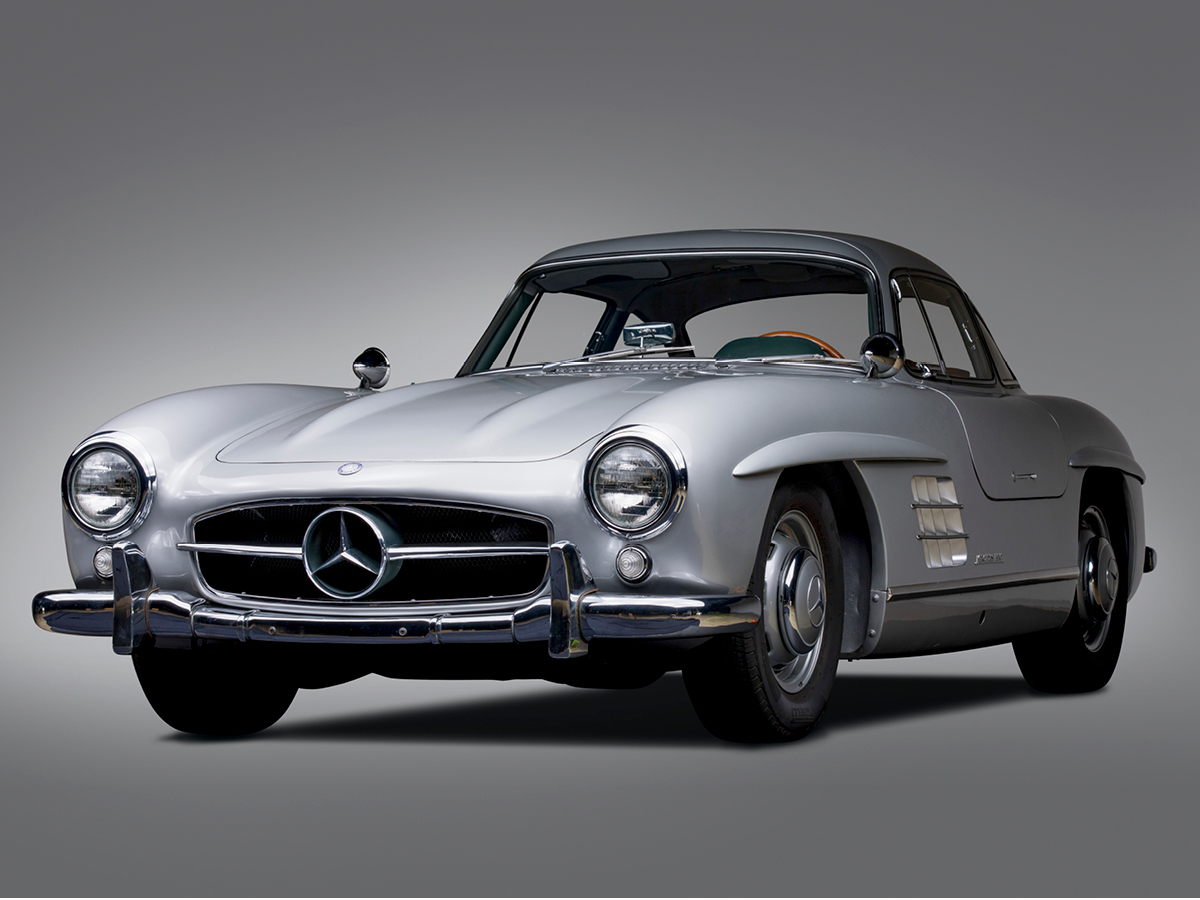 The Mercedes that made sports car history

Perhaps only if one of the decade’s sci-fi flying saucers had landed next to the Mercedes-Benz 300 SL at its 1954 New York International Motor Sports Show debut, could the stunning sports car have been upstaged. Audacious in its design and engineering, the 300 SL mesmerized auto show visitors, especially with its curious-looking doors that opened into the roof, like hatches on a fictional space ship.

The oddball door design, an engineering necessity borne of the 300 SL’s racing roots, gave the car its official-unofficial name: “Gullwing.” Deposits flowed in for a car that would retail for over $7,000 when production models arrived in 1955. Hagerty pegs average 300 SL Gullwing value at $1.1M. This past August, RM Sotheby’s sold a 1957 Gullwing from the Paul Andrews estate collection for $1.35M.

Mercedes made the Gullwing for two years, sending 85 percent of the 1,400 built to the U.S. That was no surprise, as Mercedes built the car almost purely at the urging of the brand’s U.S. importer at the time, Max Hoffman. In 1957, a 300 SL Roadster replaced the dramatic Gullwing coupe, with 1,858 made through 1963.

The “SL” stood for “sport leicht” (sport light), but at about 1,900 pounds, the car was not as “leicht” as planned. Uhlenhaut compensated by giving the car an aerodynamically slick body. That required tipping the tall six-cylinder engine at a 50-degree angle, which in turn necessitated a dry-sump oiling system typical for race cars.

But What About Those Doors?

The 300 SL’s single-overhead-cam 3.0-liter inline six, four-speed transmission and four-wheel independent coil-spring suspension (by swing-axle at the rear) were cutting edge for the day. Uhlenhaut tweaked engine output to 171 hp, about 30 hp shy of the Jaguar C-Type’s DOHC six.

Uhlenhaut’s chassis design was a true space frame with triangular sections designed for maximum rigidity. A resulting high sill area left no room for conventionally hinged doors. The solution, hinging hatches at the roof, became the most memorable workaround in sports car history.

Winner from Day One

The new 300 SL racer was thrown into the fire. A spectacular one-two victory at the 1952 24 Hours of Le Mans, and another one-two winning punch in Mexico’s infamously dangerous 1,900-mile Carrera Panamericana, rocked the sports racing world.

Their mission accomplished, the 300 SL racers were slated for retirement as Mercedes turned its attention back to Grand Prix racing. Company management initially dismissed the idea of a production version. The company’s new U.S. importer, Max Hoffman, then made a convincing case that a high-end sports car with fresh racing provenance was just what Mercedes-Benz needed to attract affluent American customers. He reportedly backed up his conviction by placing an order for 1,000 cars.

Hoffman also placed orders for a second sports model that he felt would benefit from the 300 SL’s halo effect; the four-cylinder 190 SL derived its parts from the brand’s prosaic 180 sedan but closely resembled the 300 SL.

Techno Marvel of the ’50s

The 300 SL Gullwing was a techno-marvel from bumper to bumper. The body was mostly steel, with aluminum used for the hood and trunk panels, rocker panels and door skins.  Compared to the original W194 racers, the production 300 SL was far more civilized, but also about 800 pounds heavier. An optional all-aluminum body cut that by about 170 pounds, but only 29 such cars were made.

Beneath the radically beautiful body was essentially the same W194 racecar that won Le Mans in 1952. As in the W194, the spaceframe chassis made no allowance for conventional doors, so the 300 SL road car inherited the racer’s roof-hinged hatches.

The hood covered another marvel, something never seen in an automobile before that, and something even the W194 racecar didn’t have: mechanical direct gasoline fuel injection. The high-tech induction system helped give the production 300 SL 220 hp at 5,800 rpm, a solid 50-hp bump over the W194 racecars. An optional Sport Cam further boosted output to 240 hp at 6,100 rpm, and many owners later added it during engine rebuilds.

A 300 SL could sprint from zero-to-60 in under eight seconds and reach 140 mph, startling performance for the day. The Gullwing’s big Alfin drum brakes were not as advanced as the Jaguar C-Types discs but were up to the job.

Catching the Eye, Cheating the Wind

The 300 SL road car adopted the basic contours of the W194 but was far more finished and elegant in the front end and exquisite detailing, such as “eyebrows” over the fenders. The egg crate-style front fender outlet grilles ducted engine heat and inspired many copycats.

The Gullwing’s interior appointments and comfort were suitable for everyday driving or long-range touring, though ventilation could be subpar on hot days. Air conditioning was not available. Optional luggage was specially fitted for the area behind the seats, since the trunk was mostly filled by the spare wheel.

Critical for Mercedes customers was that the Gullwing really could be driven daily at a time when most high-end sports cars could be fickle about such duty. Even today, some Gullwing owners drive their treasured sports cars hundreds or even thousands of miles to participate in club events and road tours.

Built to be Driven

Although the 300 SL made its outstanding handling accessible even to casual drivers, it could truly shine in skilled hands. Indeed, the production Gullwing proved to be quite the racer in its own right. American racing legend John Fitch won the GT class in Italy’s 1955 Miglia Mille driving a bare-bones but otherwise stock 300 SL.

The 300 SL truly was the first supercar. In 1955, Road & Track Magazine summed up the 300 SL perfectly: “The sports car of the future has become a reality.”

If you were at the Pebble Beach Concours d’Elegance this past August, you might have seen the gathering of 300 SLs, including original W194 racecars. The second W194 built is featured in a SL 70th anniversary display at the Mercedes-Benz Museum in Stuttgart through May 2022.