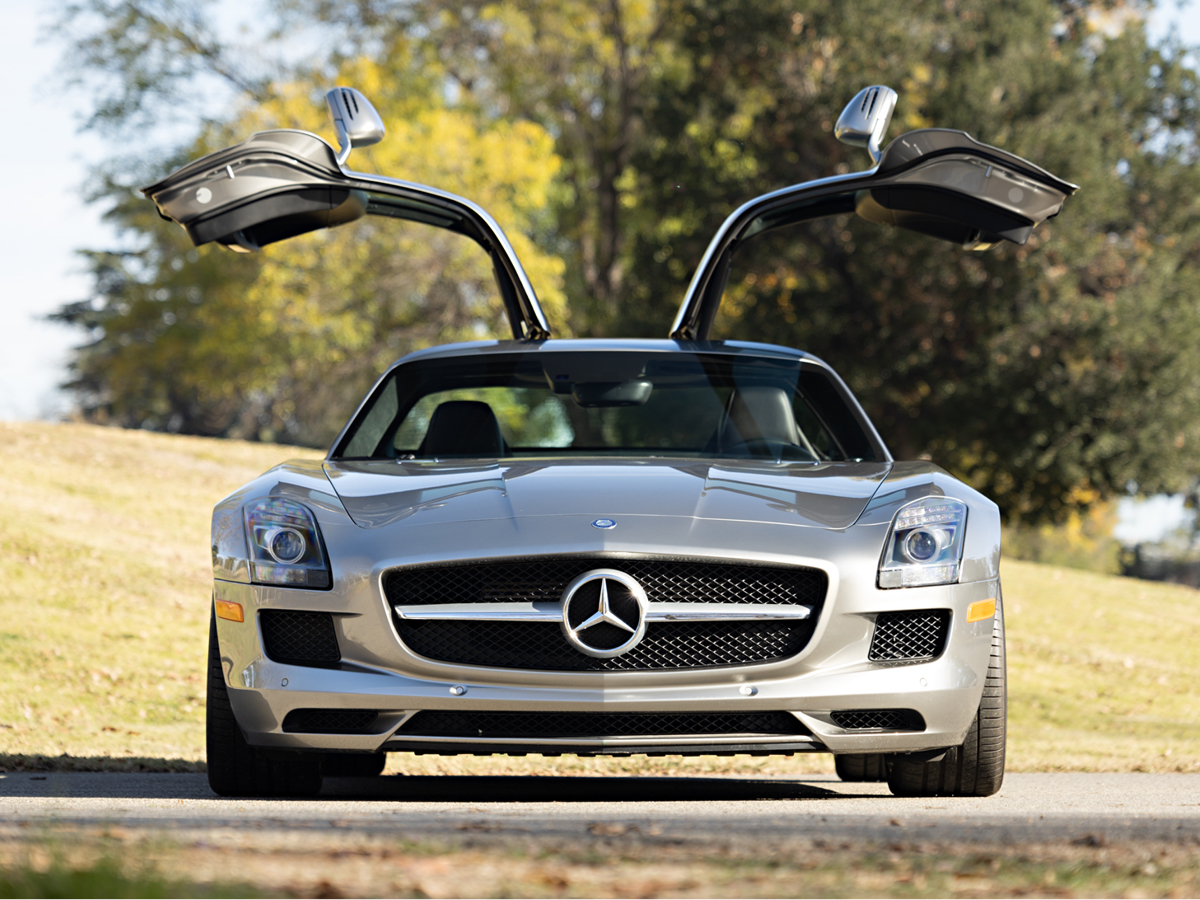 It was never lost on Mercedes-Benz designers, engineers and marketers that the marque had created an automotive icon with the original 300 SL “Gullwing” in the mid-Fifties. The Gullwing would earn that status even without the distinctive doors that opened into the roof, but those doors did become the car’s defining feature. And that is why Mercedes included Gullwing-type doors on the SLS AMG sold in the U.S. from 2011-2015.

Touted as the first car designed, engineered and built entirely by AMG, the performance division of Mercedes-Benz, the SLS AMG also featured AMG’s first engine not based on an existing Mercedes powerplant. At its Scottsdale auction, Gooding & Company will offer a single-owner 2011 SLS AMG in stunning Alubeam Silver and with just 3,000 miles from new. The pre-sale estimate is $175k-$225k.

Does the Mercedes SLS AMG uphold the Gullwing legend?

The first Mercedes 300 SL Gullwing got its hatch-like doors from necessity. The car’s space-frame chassis had high sills that precluded use of conventional doors. Since Mercedes initially intended to build just a handful of the cars for racing, this was not seen as a problem. When the decision was made to put the car into production, the doors had to stay, since the production car used the racer’s frame.

The 300 SL Gullwing coupe gave way to the 300 SL Roadster in 1957, an easier car to live with. The idea of a true Gullwing successor never seemed to leave Mercedes, though. The brand’s various C111 experimental cars made from 1969 through the 1970s, as well as the C112 prototype in 1991, all had gullwing-type doors.

The Mercedes SLR McLaren, built in a joint venture between the two companies from 2003-2010, had scissor-style doors that opened upward and forward. Assembled by McLaren in England, the SLR was a stunning machine that cost nearly $500,000 and was limited to 2,175 built. For its next supercar, Mercedes took development and production in-house. The resulting car cost less than half that, but with similar performance.

To create a true Gullwing for the 21st century, Mercedes handed the project to AMG, its performance division, which had started as an independent Mercedes tuner in the Sixties. With an aluminum space-frame chassis and body shell, the SLS-AMG weighed about 3,800 pounds in U.S. market form. That was about 1,000 pounds more than its muse, the original Gullwing, but those pounds were accounted for in five decades of evolution in performance, safety and comfort.

The SLS AMG design blended of classic and modern Mercedes themes. The gullwing-style doors, which were supported by hydraulic struts, took up less room to open than conventional doors, adding a smidge of practicality.

By all accounts, Mercedes-AMG nailed the SLS AMG performance and dynamics, and it started with a fabulous engine. Until that point, AMG had been hand-assembling its modified versions of existing Mercedes engines. By the time the SLS AMG arrived, however, AMG had already introduced its own engine, a naturally aspirated 6.2-liter double overhead-cam V8, known internally as the M156. The engine displaced 6,208cc, but Mercedes called it a “6.3” as an tribute to its own classic 6.3-liter V8, which was the first engine that AMG modified and raced.

In Mercedes-AMG coupes, sedans and SUVs, output ranged from 475-518 horsepower, depending on the model. The SLS AMG got a specially built version of that engine, known as the M159, making 563 horsepower.

Car and Driver clocked the SLS AMG at 0-60 mph in 3.5 seconds, also recording the quarter mile in 11.6 seconds at 126 mph. Mercedes claimed a top track speed of 197 mph. With the engine mounted behind the front axle line and the seven-speed dual-clutch automatic transaxle mounted in the rear, the SLS AMG had a commendable 47:53 weight distribution to aid agility.

Yet, the SLS AMG GT was a highly civilized GT car, much as the original 300 SL Gullwing had been 55 years before. From the wheel, the driver looked over a hood nearly six feet long, evoking a kind of feel that is completely absent in mid-engine sports cars. An elegantly simple but well finished cabin design paid homage to the 300 SL and also featured some vintage aircraft styling touches, just because.

The SLS AMG was built as a group effort: Magna Steyr produced the aluminum chassis and body shell in Graz, Austria; AMG built the 6.2-liter V8 in Affalterbach, Germany, and Mercedes-Benz handled final assembly in Sindelfingen, Germany. Mercedes wanted to make money on this car, and so it priced it well for the segment, about $190,000 to start in 2011.

Mercedes went on to build about 12,000 SLS AMG models for global markets over five years. Of those, one third were roadsters. The car evolved, becoming the SLS AMG GT in 2012 with a bit more power and chassis tweaks. In 2013, the SLS AMG GT Black series had its engine tweaked to 622 hp and featured reduced vehicle weight. An SLS AMG GT3 racer had a stellar competition career.

In the end, the SLS AMG proved that Mercedes-Benz could develop its own modern supercar, and do so in its own unique way. With the engine in front, unapologetic heritage design and the maker’s typical attention to comfort, the SLS AMG was – and remains – a worthy successor to the original Gullwing.