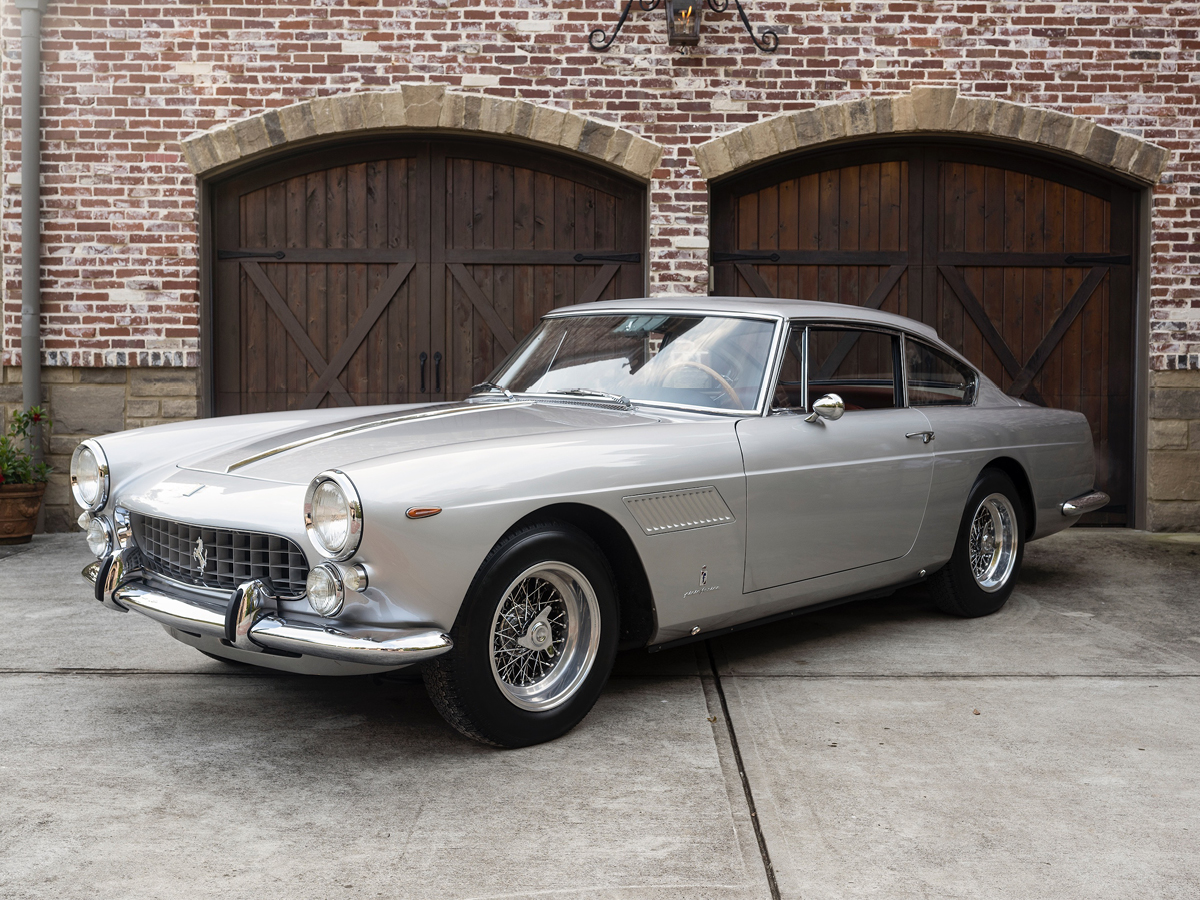 A Ferrari for the whole family to enjoy? That was the idea behind the marque’s recently discontinued GTC4 Lusso, and before that, a slew of “2+2” coupes. Certainly, the upcoming Purosangue “not an SUV” should fit that bill even better. All of those trace their lineage to the 250 GTE, a 2+2 coupe introduced in 1960 that became Ferrari’s best seller in the period.

The 250 GTE 2+2 had remained an under-the-radar classic for decades, as most Ferrari collectors gravitated toward the two-seat Berlinettas and Roadsters. That kept values down and made this larger coupe attractive to builders using its parts to create replicas of more valuable Ferrari models.

Today, it’s a different story, as many have come to appreciate this eminently drivable, comfortable and attractive V12 model. RM Sotheby’s will offer two at its Scottsdale Auction. The silver 1963 250 GTE Series III featured here has a pre-sale estimate of $425k-$525k. A red 1962 Series II version, said to need a cosmetic restoration, has a pre-sale estimate of $175k-$225k.

Originally built on the 102.4-inch wheelbase of the previous 250 GT Coupe, the GTE’s chassis was considerably modified to accommodate a fairly useful rear seat. List price in the U.S. in 1962 was $12,900.

The arrival of the 1957 Maserati 3500 GT surely rang some bells in Maranello, as this was a somewhat larger luxury coupe than Ferrari had been offering, featuring a vestigial rear seat for occasional passengers. Ferrari’s answer was the 250 GTE, also called the “2+2.” The new model made its debut at the 1960 24 Hours of Le Mans in its role as the race marshal’s car. A more formal introduction occurred at the Paris Salon that October.

Room and Refinement for the Long Haul

Ferrari made a concerted effort to attract new customers with the 250 GTE’s added practicality. The key to adding room to the car without lengthening the chassis was to move the engine position just under eight inches forward.

The “E” in the car’s GTE badge name signified a revised version of the familiar 3.0-liter V12 from the 250 GT, but with a quieter exhaust and smoother throttle response for easier driving in everyday situations. The engine retained the “dry sump” oiling system and three Weber carburetors as used on the 250 GT Coupe. The exhaust changes were made without affecting engine output, which was the same as the 250 GT Coupe at 240 horsepower. In Road & Track magazine’s test from the period, the 250 GTE did 0-60 in eight seconds. Ferrari claimed a top speed of 140 mph. The 250 GTE’s four-speed manual offered an optional overdrive for quieter highway cruising.

In period road tests, the GTE’s weight was reported at around 3,300 pounds. The rest of the mechanical package drew from the Ferrari parts shelves, which made it easier and less expensive to develop and produce than an all-new design. That included the solid-axle rear with leaf spring suspension, though this used a kind of traction-bar setup for better control.

Not surprisingly, Ferrari turned to Pininfarina to design the 250 GTE’s body. At 185 inches, the GTE was a full foot longer overall than the 250 GT Coupe, though it was also about two inches lower.

The design fit right in with other Pininfarina’s work for the marque and was influential in its own way. One can see some elements of America’s later 1960s sporty coupes in the GTE’s proportions and fastback roof line. And, say, isn’t that the “Hoffmeister kink” in the rear side window design that BMW claimed to have introduced? (Actually, it was on some late-1940s General Motors cars before that.)

The ’63 250 GTE Series III model brought some design updates, including moving the auxiliary driving lights outside the grille and an elegant single vertical taillight design replacing the previous triple round taillight pods.

Ferrari went on to make 954 250 GTE 2+2 models through 1963, with a little under a third of those being Series III models. Originally finished in Blu Sera over Marrone Connolly leather, the car now wears Grigio Argento (silver) paint and Mahogany Connolly hides. This 250 GTE retains its numbers-matching engine, transmission and differential.

The consignor of the featured car is said to have enjoyed and exercised this Ferrari regularly, including driving it in the 2012 Copperstate 1000 (Arizona); twice in Rich and Jean Taylor’s Mountain Mille (Virginia and West Virginia); the Smoky Mountain Mille (North Carolina), and numerous editions of One Lap of the Mountain (North Carolina). At the 2013 Euro Auto Festival in Greer, South Carolina, it was awarded Best Italian Car, Best Ferrari, and Best in Show.

The Ferrari 250 GTE was a bigger milestone in the marque’s history than it might be given credit for. The model and its successors were usually the maker’s best sellers, and therefore quite profitable.