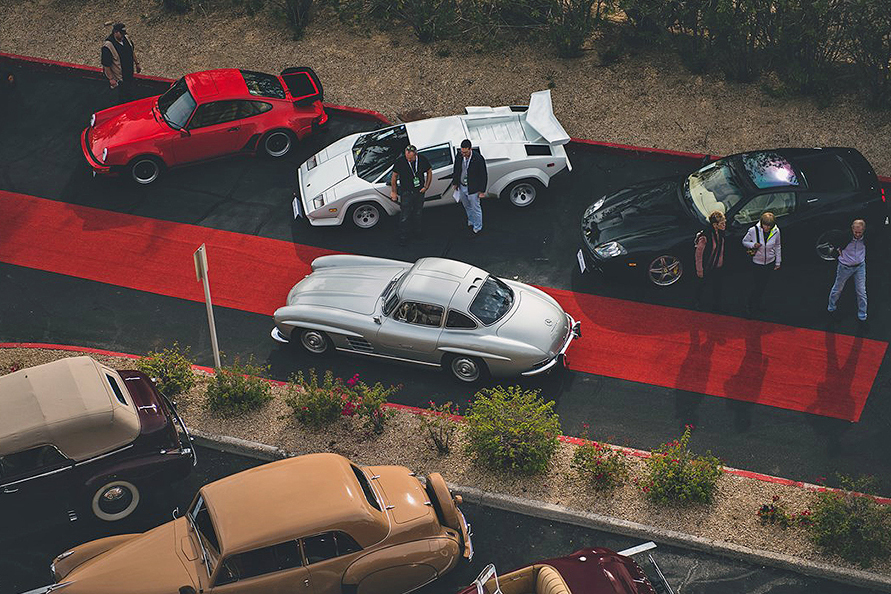 As a wise person once said, change is the only constant. That adage applies particularly well to the collector-car auction industry. The industry has weathered a myriad of changes in 2020, and during the first days of 2021. Having been one of the first traditional high-end collector-car auction companies to embrace online-only auctions earlier in 2020, RM Sotheby’s was particularly well-positioned to cope with the recent challenges posed by the unfolding pandemic. While some states have indeed reopened for business, RM has elected to replace its traditional Automobiles of Arizona live auction held annually in January at the Arizona Biltmore with a new format and location.

Scheduled for January 22nd with a 1:00 p.m. MST start time, RM’s reengineered Arizona sale will now take form as a livestream auction. They will also have limited onsite attendance at the OTTO Car Club and Storage in Scottsdale. Approximately 90 lots are up for auction in all, including several interesting pieces of highly collectible memorabilia. As always, RM Sotheby’s automotive lots will offer a virtual trip through automotive history. This includes a number of delightful rarities in the mix for good measure. As always, the team of sales representatives from Premier Financial Services chose their favorite vehicles on the auction block by RM Sotheby’s in Scottsdale. As anticipation builds for this innovative event, we hope you will enjoy our pre-auction coverage. Contact us to discuss our flexible options for a confident and enjoyable bidding experience.

Captivated by its amazing V-16 powerplant, Premier’s Midwest Sales Manager, Ross Dressel, chose Lot 139. This stunning 1993 Cizeta V16T is his pick among the early offerings from RM Sotheby’s in Scottsdale. While such marques as Ferrari and Lamborghini immediately come to mind at the mention of rare and exotic European supercars, Cizeta remains an very interesting footnote to modern automotive history. Especially in the history of exceptional cars designed and built for the elite.

Named after the Italian pronunciation of founder Claudio Zampolli’s ‘CZ’ initials, Cizeta was a partnership of Zampolli and Giorgio Moroder. Moroder, famed musician and record producer, whose music was integral to the soundtrack of the 1980s and beyond. Featuring aggressive, otherworldly bodywork designed by Italian styling genius Marcello Gandini, the Cizeta V16T is powered by a thundering mid-transverse V-16 engine. In addition, it delivers what must be amazing performance, unadulterated by the raft of electronic driver aids commonly in use by most of today’s high-performance cars. We are advised this stunning example was ordered new by a member of the Royal Family of Brunei. Plus, it was up for display by Cizeta at the 1993 Geneva Motor Show. It is being offered with fewer than 1,000 kilometers (620 miles) of use. This is a stunning example of these extremely rare, near-mythical supercars.

This 1957 Mercedes-Benz 300 SL Roadster, Lot 138, is the pick of Keith Neelans, Premier’s Northeast Sales Manager. Long a collector favorite, the 300 SL remains an unqualified collector favorite. In Roadster form, this was far more user-friendly than the more demanding “Gullwing”. Yet, it maintained its closed predecessor’s performance with select updates from the wizard-like Mercedes-Benz engineering staff. According to RM Sotheby’s, this captivating example was recently reunited with its original engine. In addition, subtly updated with hidden power steering gear and Bluetooth audio capability. Finished in splendid Light Green Metallic paint over Dark Green upholstery, accented by a Dark Green convertible top, it is a wonderful example of a true “blue chip” collector vehicle. It is complete with valuable Rudge “knock off” wheels and luggage. Plus, an owner’s manual, tool kit, and copy of the factory data card.

Our Southwest Sales Manager, Michelle Yancey, chose Lot 121. This is a sinister 1991 Lamborghini Diablo as her selection from the 2021 RM Sotheby’s Scottsdale auction docket. Debuted in January 1990 as the long-overdue replacement for the Countach, the Diablo was styled by Italian design master Marcello Gandini. The vehicle features select refinements by Chrysler Corporation, Lamborghini’s corporate parent at the time. Power is delivered by a 5.7-liter, fuel-injected version of famous engineer Giotto Bizzarrini’s original Lamborghini V-12 engine design. Capable of 485 rated horsepower, the Diablo was worthy of its name, with a 200-plus mph top-end charge.

Additionally, the Diablo also heralded such welcome passenger amenities as air conditioning and power window lifts. However, steering remained unassisted. Finished in Nero (Black) over luxurious Beige leather, this early Diablo was retained by the original owner until 2017. During this tenure, it was fitted with an aftermarket carbon fiber rear wing. Coming to market with over $20,000 of service work completed since 2019, it handsomely bridges the “classical” and modern Lamborghini eras.

Attracting the attention of Juan Garcia, our West Coast Sales Manager, is this 1956 Mercedes-Benz 300 Sc Roadster, Lot 160. In 1951, just a few short years following WW II, Mercedes-Benz returned to prewar magnificence with the new 300 series, commonly known as the ‘Adenauer’. This was due to its association with legendary German Chancellor Dr. Konrad Adenauer, driving force behind German reconstruction. Following the 300 sedans and uprated 300 S, the fuel-injected 300 Sc debuted in 1955.

Extremely limited production included this early 300 Sc Roadster, with Body No. 00001, created by the craftsmen at Mercedes-Benz’s Sindelfingen coachworks in the finest Old World style with intricate, hand-formed and fitted panels, extensive yet tasteful brightwork, luxurious leather upholstery, and beautiful wooden interior trim. While weighing nearly 4,000 pounds, the 300 SC was nonetheless capable of exceeding 110 mph while cosseting its lucky occupants in serene luxury. Colors are magnificent and as cited by RM Sotheby’s, this 300 Sc Roadster is 1 of only 53 examples produced.

Premier’s Southeast Sales Manager, Chris Warren, chose Lot 173, this charismatic 1974 BMW 2002 Turbo. Based on BMW’s renowned 2002, widely regarded the world’s first sport sedan, the rowdy 2002 Turbo is an unqualified motorsports icon. Since road going examples were required to homologate the Turbo for international racing competition, BMW enthusiasts were rewarded handsomely with this pocket rocket. It was first introduced at the 1973 Frankfurt Auto Show. It has since been upgraded, with a single KKK turbocharger, Kugelfischer fuel injection, and aggressively flared fenders. Plus, provocative graphics, in addition to larger wheels and tires. The small but mighty 2002 Turbo was factory-rated at 175 horsepower and capable of reaching 130 mph.

A brilliant but short-lived model, the 2002 Turbo offered monstrous performance in racing trim. However, production was cancelled in the wake of the 1973-74 OPEC oil embargo and tightening emissions restrictions. The product of a 3-year rotisserie restoration, this 2002 Turbo is 1 of just 1,672. Accompanied by a BMW Classic certificate and invoices, it sports desirable features. This includes an electric sunroof, 5-speed manual gearbox, center-exit exhaust, ALPINA wheels, plus factory-correct, Turbo-specific front seats.

For their part, the staff at Premier’s corporate headquarters in Woodbury, Connecticut are collectively watching Lot 117, a Rosso Corsa 1984 Ferrari 512 BBi. The ultimate evolution of the “Berlinetta Boxer” lineage that started with the 365 GT4 in 1973, the 512 BBi debuted at Paris in 1981. The “i” reflects the new Bosch K-Jetronic fuel-injection system. Further, capable of stunning performance, this highly desirable final-series 512 BBi is combines iconic Pininfarina styling, a mid-mounted 335 horsepower, 4.9-liter flat-12 engine, 5-speed rear transaxle, and positively intoxicating exhaust note, all in the best Ferrari tradition. Acquired by the consignor in 2004, it shows under 24,200 kilometers’ use, roughly 15,000 miles and comes to market with over $90,000 worth of accompanying invoices.

A Simple Lease from Premier Financial Services takes the stress out of bidding at auction. Premier is your best path to owing any high-end automobile, from leasing a Ferrari from auction to driving it home from the dealer. Preparation is key to getting the car of your dreams. Be sure to check out the many resources we have provided elsewhere on the Premier Financial Services website and contact us today. Representatives from the Premier Financial Services team of vehicle-leasing experts will be on call for the RM Sotheby’s Scottsdale auction. They will be ready to assist existing and new clients and monitoring collector-car valuations. Be sure contact us now to prepare to bid during RM Sotheby’s Scottsdale 2021 auction with confidence and experience our renowned blend of service and advice first-hand.