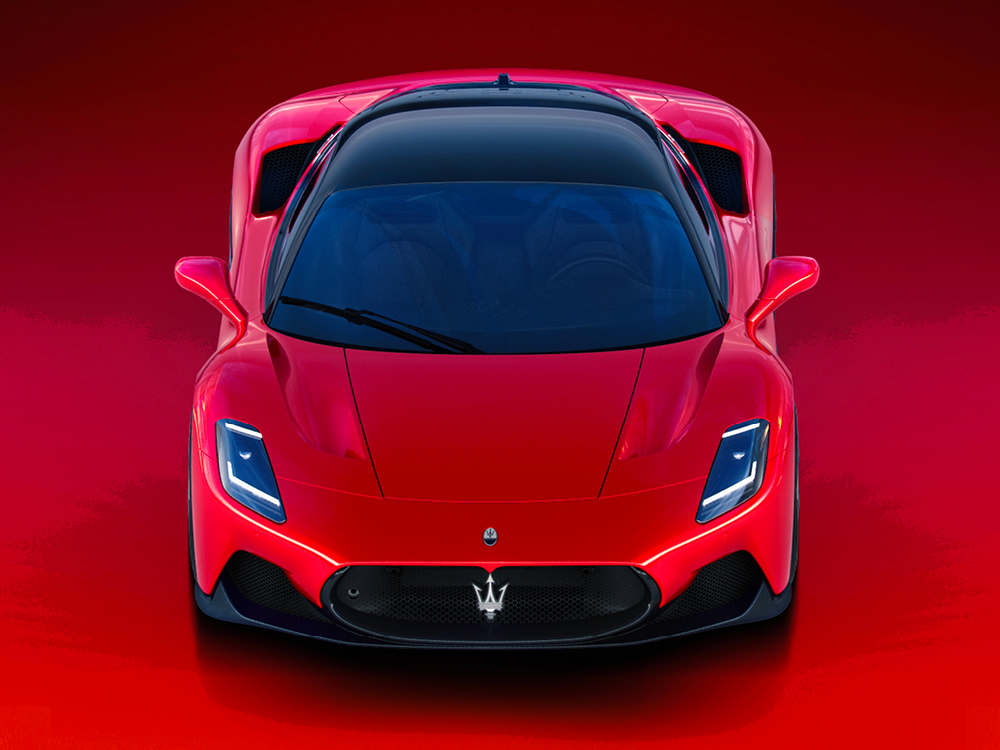 Indeed, March went out like a lion in many parts of the country, and the howling winds, surprisingly frigid temps, flooding rains and snow squalls coincided with a blizzard of supercar updates. Buckle up.

The Maserati MC20, which we previewed in 2020, has finally arrived. Initial media reports and road tests are very positive. Putting aside the Ferrari Enzo-based MC12 from 2004 (50 road cars and 12 racecars built), the last Maserati super middie was the Bora in the Seventies. So, the MC20 could be viewed as a very late sequel.

The gorgeous Bora was quick and fast for its day, earning a “supercar” title, but the MC20 operates in a different universe. First and foremost, this Maserati is quick and fast. In Car and Driver’s recent test, the MC20 howled from rest to 60 mph in 3.2 seconds and then down the quarter-mile in 11 seconds flat at 131 mph.

Maserati’s “Nettuno” 3.0-liter V6 makes 621 horsepower with help from dual turbos and a novel pre-chamber combustion setup in the cylinder head. Other twin-turbo V6s in the segment make a bit more. The sole transmission offered is an eight-speed dual-clutch automatic, with paddle shifters, of course.

The MC20 is not the quickest off the line in its class. The traction control system apparently allows a bit too much of the torque to get sacrificed to wheelspin. Also, Car and Driver’s MC20 test car weighed 3,757 pounds, quite a bit more than the 3,307 pounds claimed by Maserati. We’ll just call the scales in Italy a tad optimistic and move on.

The MC20’s performance is not in question. On the road, passing power is going to be more important to most drivers, and, as Car and Driver eloquently put it:

“It’s cliché to say that a car’s passing power feels like getting rear-ended by a dump truck, but that’s really what it feels like when you abruptly mat the accelerator on the move in the MC20.”

The MC20 posted 1.08g of lateral grip on the skidpad. That’s a great number, if not the “ultimate,” but Maserati was not aiming for track dominance with the MC20, which starts at $216,000. Rather, the goal was a well-rounded (but really fast) sports machine – a kind of 21st-century Bora, if you will.

Maserati certainly learned from Ferrari during the duo’s time under the Fiat and FCA umbrellas together, as the MC20 can be optioned well past its base price with features like carbon ceramic brakes ($10,000), carbon-fiber engine cover ($5,000); Sonus Faber sound system ($4,000) and a black roof ($4,000), among many others.

One does not need psychic ability to predict success for the Maserati MC20 … and happy faces on its drivers.

Move Over for Porsche

If you want close to the ultimate in gas-fueled acceleration in a new road car, one that also coddles occupants in luxury and costs about the same as the Maserati MC20, we have one for you. It’s Porsche’s latest top sports car, the 911 Turbo S with Lightweight Package.

While lacking the exotic looks of the Maserati and other cars in this class, the all-wheel drive 911 Turbo S pretty much gives hypercar performance levels. The 640-horsepower twin-turbo flat six remains unchanged.

For an additional $10,340 over the $208,350 starting price for the Turbo S, the Lightweight Package chops 89 pounds from the car’s 3,646-pound weight. Most of the reduction comes courtesy of less sound insulation, lighter-weight glass and the carbon-fiber race-style bucket seats from the 911 GT3. You can also choose, at no extra cost, the 18-way Adaptive Sports Seats Plus.

Tesla, however, cannot match the Porsche 911 for ranking as the Most Dependable Vehicle in the J.D. Power 2022 U.S. Vehicle Dependability Study for the third time in the past four years. Tell your friends, “Not only is my 911 Turbo S Lightweight Package frighteningly fast, but it’s also more dependable than a Tesla or a Toyota.”

Our post on the Lotus Emira mentioned the upcoming Lotus EV, and here it is. The “T132” code name has given way to a proper name, and of course it starts with an “E.” Meet the Lotus Eletra, which Lotus calls “the world’s first hyper SUV EV.”

Sized nearly the same as the Lamborghini Urus, the Eletre bears some resemblance to the Lambo SUV at the front but has a more flowing design overall. With 600 horsepower from front and rear motors, the Lotus Eletra promises rapid performance. Range on a full charge is estimated to be about 315 miles, and the Eletra is loaded with tech, including lidar sensors for eventual autonomous driving capability.

Built in China by Lotus, Volvo and Polestar parent Geely, the Lotus Eletra is coming to the U.S. for 2024.

Finally, taking us out of March like a Prancing Horse, Ferrari used its Facebook page (16.2 million followers!) to issue a sneak peek at its soon-to-be-revealed Purosangue sort-of-SUV. The clever folks in Maranello left it to the media to lighten up the image to see some detail.

Watch for the whole car soon.