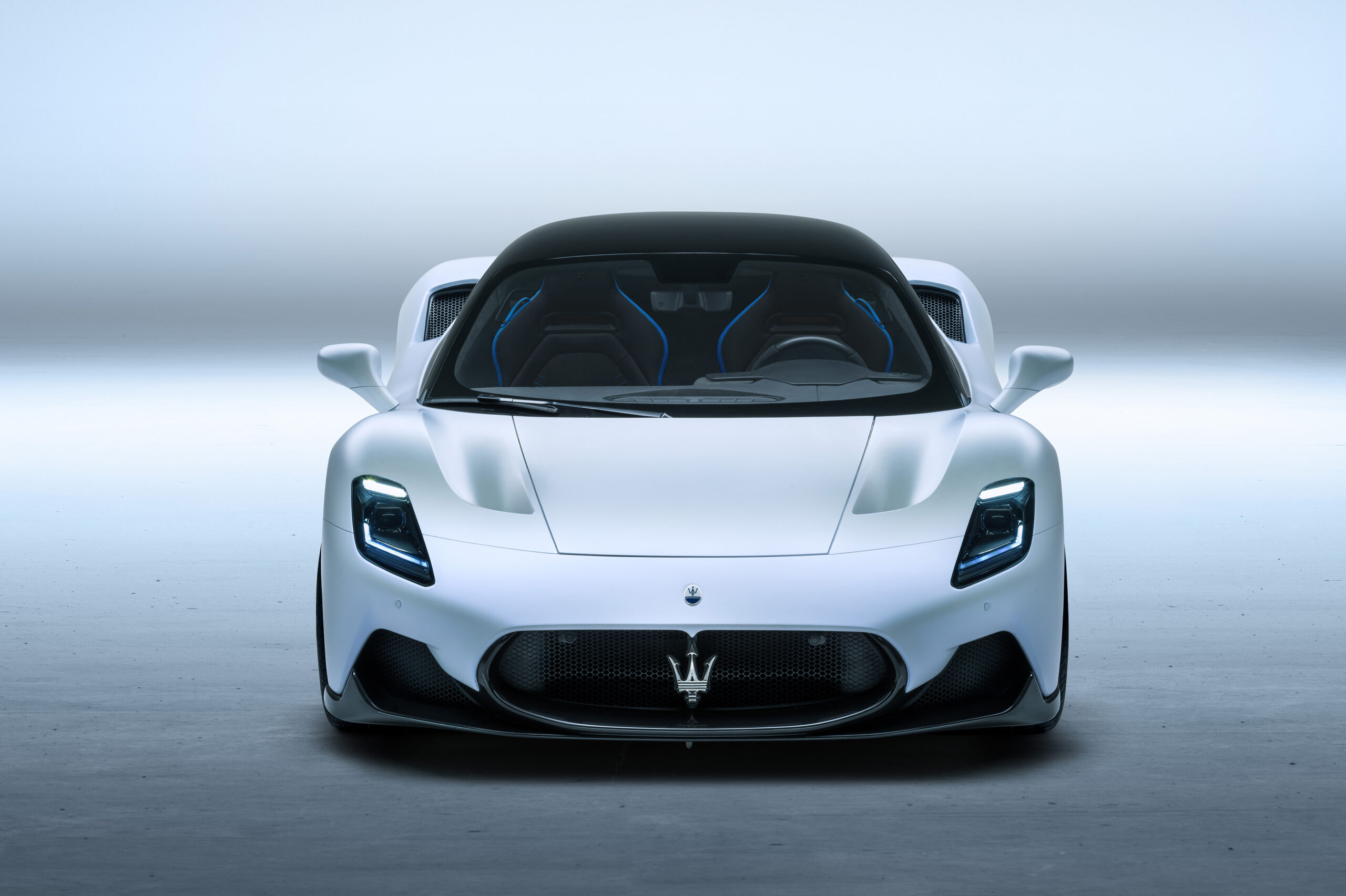 Return of the Maserati Mid-Engine Supercar

As the Maserati GranTurismo ended its 12-year production run in late 2019 (2020 models), we were anticipating a successor called the Alfieri. And then Maserati springs mid-engine supercar on us. (No complaints there!) Meet the Maserati MC20.

If you were designing your first mid-engine supercar after a four-decade absence from the category, would you go with a roaring internal combustion engine, or a humming electric? With the MC20, Maserati said yes to both. The gas version of the MC20 arrives in 2021 and the EV in 2022. There’s no hybrid, but there will be coupe and convertible variants.

When Ferrari spun off from FCA, Maserati was free to take a shot at a piece of its former corporate sibling’s market. (It’s all now FCA-PSA or Stellantis, or Fiat-Peugeot-Citroen–Chrysler-Dodge-Jeep-Ram or something to that vain.) The Maserati MC20 has no relationship to any Ferrari, and it’s powered by Maserati’s first new engine in more than two decades.

Maserati has not announced pricing, but media mavens have been guestimating a start of about $200,000.

The “MC” in MC20 stands for “Maserati Corse,” and the “20” is for the year of its official introduction. And yes, “corse” means racing. Maserati has already confirmed that the MC20 will have a competition variant.

The MC20 road car combines a raft of modern supercar credentials. The body and underlying main structure are made from carbon fiber, with aluminum front and rear subframes. Front and rear multilink suspension and Brembo carbon-ceramic brakes promise track-day performance.

The 3.0-liter, 621-horsepower, twin-turbo V6 engine is paired with an 8-speed dual-clutch automatic transmission. The MC20 is wading into a pool teeming with larger-displacement V8 and V10 sharks, but its ace card is a claimed weight of about 3,200 pounds. That would undercut some rivals by about 400 pounds, though it may be prudent to put a temporary asterisk on that figure until a U.S.-spec MC20 arrives.

A quick glance at the Maserati MC20, leaves some suggestion of the clean, swoopy sports-racer designs from the ’60s. Maserati was out of racing by then, but what’s not to like about this shape? You’ll enter the MC20 via “butterfly” doors, like a McLaren.

The MC20’s front end shows a tasteful rendition of the Maserati grille, but it’s what’s missing that makes this car so distinctive. The MC20’s design deliberately minimizes air intakes and aero tricks, and there’s no rear wing at all, just a smooth, clean shape with a subtle rear lip spoiler. Maserati says that’s all that’s needed to generate downforce at both ends.

Maserati calls the MC20’s twin-turbo, 621-horsepower, 3.0-liter V6 “Nettuno,” which is Italian for Neptune. That’s of course the Roman god of water, whose trident spear became the template for Maserati’s marque badge. The engine is boosted by twin turbochargers, and the Formula One-inspired twin-spark, pre-chamber cylinder head design helps this engine to squeeze out nearly 210 horsepower per liter (the Ferrari F8 Tributo registers 182 hp per liter.)

The Maserati MC20’s 0-200 km/h time (0-124 mph) of “less than” 8.8 seconds might slightly undercut the Lambo. Maserati pegs the MC20’s top track speed at 202 mph, right among rivals. In reality, when considering cars in this realm, the performance numbers are all similar, leaving you to judge them more by how they feel to you on the road. That’s one reason to lease several different ones, of course!

The Maserati Touch Inside

Even at their sportiest, Maseratis have always emphasized everyday, long-distance comfort, and the MC20 will follow that tradition. The roomy cabin is luxurious and uncluttered, tastefully combining carbon fiber trim, leather and Alcantara. A 10-inch digital instrument panel and 10-inch central touchscreen provide fully up-to-date infotainment and connectivity.

Maserati has also revealed performance specs for the upcoming MC20 EV, which will use front and rear electric motors. The company says the EV version will be a bit quicker than the blazing gas version. Range is said to be around 240 miles. That is likely based on the more urban-oriented European test cycle, but a 200-mile range for a U.S. version seems within reason.

Gas or electric, the driving promises to be exhilarating. The Maserati supercar is back.