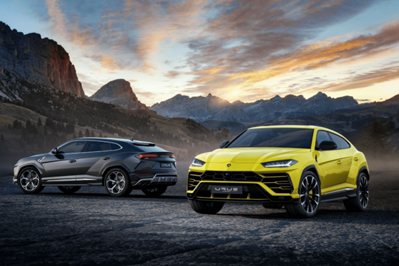 The Cows have Come Home.

With the introduction the Urus, Lamborghini joins fellow Italian marques Maserati and Alfa Romeo in offering a high-performance SUV. No surprise there; Lamborghini showed the Urus concept more than five years ago. Bentley entered the fray last year, and Ferrari and Rolls-Royce will be next with utility vehicles.

And the Earth keeps turning. And the sports cars will keep coming. Just look at what the Cayenne and Macan did for Porsche. Would there be nearly two dozen variants of the 911 to choose from if not for the success and profits of the marque’s SUVs?

The Lamborghini Urus arrives next year at an MSRP of about $200,000. Lamborghini expects to build about 3,500 a year, doubling its production and making the Urus its best seller.

It’s Got German and British Cousins

The introduction of the Lamborghini Urus owes much to the Porsche Cayenne, which opened the gates for sports car marques to expand their repertoire with SUVs – and anything else they choose to build to chase customers. The Urus owes a debt to the Cayenne in another way: both are based on the Volkswagen Group’s Audi-developed MLB Evo platform. So are the Bentley Bentayga and a bunch of different Audi and VW vehicles. The Urus is longer, lower and wider than the Porsche and Audi SUVs.

In keeping with its “bullish” tradition, Lamborghini borrowed the Urus name from the wild ancestor of modern domestic cattle. Is that a hint that the raging bull has been domesticated for family use?

Viewed in profile, the Lamborghini Urus seems to be crouching like a bull about to charge. The production model shows a far busier front end than the concept vehicle but otherwise follows its sharply folded and creased silhouette pretty closely. Although the Urus looks like no other SUV on the road today, you don’t need to squint much to see a resemblance to the ill-fated Acura ZDX of a few years back.

There’s no such resemblance inside, where the Urus looks, well, like you’d expect a Lamborghini sports sedan or SUV to look like. Putting that Rambo Lambo LM002 aside for a moment, the Urus is the first Lamborghini since the 1968-1978 Espada to offer real seating for four.

641 Horses for This Bull

Don’t look for a V-10 or V-12 engine from a Lamborghini sports car. The Urus gets a 4.0-liter twin-turbo V8 that serves up 641 horsepower and 627 lb-ft of torque and sends it through a ZF 8-speed automatic transmission. It’s a torque converter unit, not dual-clutch, likely chosen to ensure driving smoothness in the kind of everyday situations the vehicle is most likely to encounter.

Lamborghini says it expects 0-60 in about 3.5 seconds and a speed of nearly 190 mph. Because, you know, you’ve got to get the kids to school on time. If that boarding school is in Europe, then try your skill on the Nurburgring, where Lamborghini projects it will use a Urus to beat the 7:15 lap time set by an Alfa Romeo Stelvio SUV. We’re not sure if that includes short-cuts off road through the forest.

Forget any analogies to the Lamborghini LM002, the monster SUV built into the early 1990s. This is a different time, and a different Lamborghini management. The Urus is built primarily for supercar-like performance on-road, although it does have all-wheel drive and raised ground clearance. There is off-road capability, and many driver-selectable control modes. This includes Strada, Sport, Corsa, Neve (Snow) plus Terra (off-road) and Sabbia (sand). Each mode optimizes the all-wheel-drive system’s torque distribution and air suspension’s road clearance (up to 9.8 inches) for the driving conditions. Lamborghini plans to offer a Urus “Dune” version with bodywork modified specifically for off-road duty. We’re guessing many will like the rugged look and choose it just for style.

Based on early media drive reports, the 2019 Lamborghini Urus may not only be the marque’s most versatile vehicle ever, but one of its most enjoyable to drive, too.