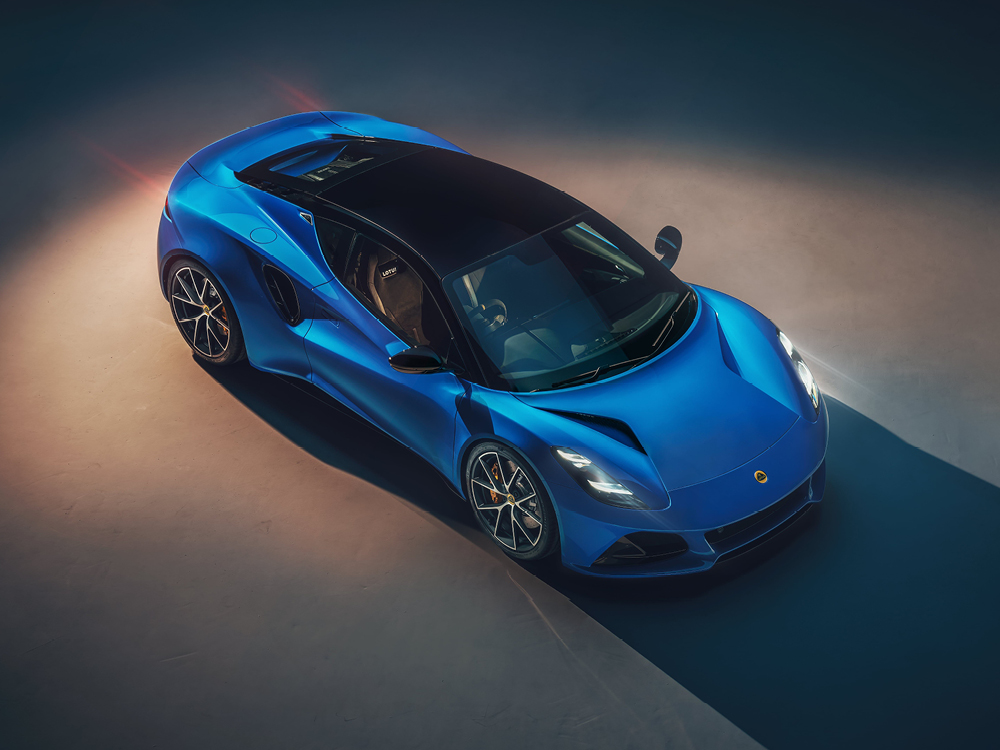 The Lotus Emira is finally here … almost. You’ll be able to order one in the U.S. this summer, though pricing was released in mid-March. The two-seat, mid-engine Emira replaces the 2+2 Evora 400, and Lotus calls the new car its “most accomplished” model ever. Initial media reviews support that statement.

The Emira’s impending arrival brings some very good news, tinged with a note of melancholy. Just as Lotus seems to have perfected its gas-powered sports car, that part of the marque lineage is coming to an end. The Emira will be the final internal combustion engine Lotus. The brand’s first EV, known so far as the T132, is an SUV that debuts on March 29.

While Lotus EVs will no doubt be thrilling to drive, the end of the company’s gas-engine chapter will certainly sadden more than a few. Cheer up, old chap, because the Emira will be around for a while.

Lotus has said its new Emira “delivers exotic supercar appeal in the sports car segment.” The Emira’s design certainly looks the part of an exotic, inheriting its basic theme and some details from the brand’s upcoming Evija electric hypercar. The shape is quite sculptural, with a distinctive “pinched” mid-section, dramatic curves, and the obligatory supercar side scoops for the engine air intakes. It is a clean and exciting form, with no add-on gimmicks needed to enhance aerodynamic performance.

The slinky body is built around what Lotus calls its new “Lotus Sports Car Architecture.” It’s not the most clever name, but it does use clever engineering, including the innovative bonded extruded aluminum chassis technology that Lotus debuted on the Elise in 1996.

Some might be disappointed to learn that “Emira” does not rhyme with Elvira, Mistress of the Dark. Lotus says to pronounce it “Eh-meer-ah” and explains that the word is rooted in “ancient languages” and “often translates as commander or leader.”

Looking at the Emira’s pricing, its competitive target is obvious. In concept, performance and pricing, the Emira is aimed right at the Porsche 718 Cayman series, notably the Cayman S and Cayman GTS 4.0. The V6 Emira will start at $82,000 – or $5,400 under the Cayman GTS 4.0’s starting price.

The 3,152-pound claimed curb weight for the supercharged V6-powered Emira is just 14 pounds less than the Porsche Cayman GTS 4.0. And, the Emira comes within about an inch of the Cayman’s main external dimensions.

When founded in the 1950s, Lotus, like other British boutique sports car makers of the period, used engines made by mainstream carmakers. It was just good economic sense. In the Sixties, Lotus designed a twin-cam cylinder head for the pedestrian Ford “Kent” four-cylinder engine to turn the Elan into a hot performer.

Lotus later used its own four-cylinder and V8 engines for the 1976-2004 Esprit. For all subsequent models, however, Lotus switched to Toyota-sourced engines, including four-cylinder and V6 units. Lotus applied supercharging to many of the fours and all of the V6 models, and the Emira continues with the 400-horsepower version used in the Evora 400.

The V6 is available with a six-speed manual or six-speed automatic transmission. In terms of chassis design, the Emira does not use any electronic chassis trickery, relying instead on the carmaker’s suspension tuning expertise to deliver a combination of track-friendly agility with commute-friendly ride comfort.

Like the Porsche Cayman, the six-cylinder Emira will be the upgrade model line. A lower-priced entry Emira model will have a four-cylinder engine from Mercedes-AMG. It’s the AMG M139 turbocharged 2.0-liter, which Mercedes calls the world’s most powerful four-cylinder production car engine, at 416 horsepower.

Alas, Lotus says the engine’s midship location in the Emira and the different exhaust plumbing it requires drops output to “only” 360 horsepower. That’s still 10 up on the Porsche Cayman S, which has a 350-horsepower turbocharged 2.5-liter four-cylinder engine and starts at $77,060 with the optional seven-speed PDK dual-clutch automatic transmission. (One could suspect the AMG engine was rated lower in the Lotus so as not to infringe on the V6.)

Well, now how about that – another interesting coincidence! The AMG-powered Emira will come exclusively with a Lotus-tuned AMG eight-speed dual-clutch automatic transmission and will start at $77,100. Lotus has not released performance figures for the four-cylinder Emira yet, but we’re betting on some more coincidences with the Cayman.

Inside the Emira, Lotus has focused on driver comfort and easy-to-use tech, some of it borrowed from Volvo. That’s no coincidence, as both brands are owned by Chinese carmaker, Geely.

Turning Up the (Production) Volume

Building a car so clearly aimed at the Porsche Cayman series is a key to Lotus’ goal of broadening its customer base. Lotus anticipates a global market for 4,500 Emiras a year. That would be a huge leap over the carmaker’s previous production figures.

There’s reason to be optimistic here. The Emira seems to exemplify all that Lotus founder Colin Chapman preached, ideally packaged and designed for the 21st century. In its Emira preview test in England, Car and Driver said, “The driving experience remains exemplary, something common to pretty much all its predecessors.”

The last gas Lotus is, indeed, a gas.