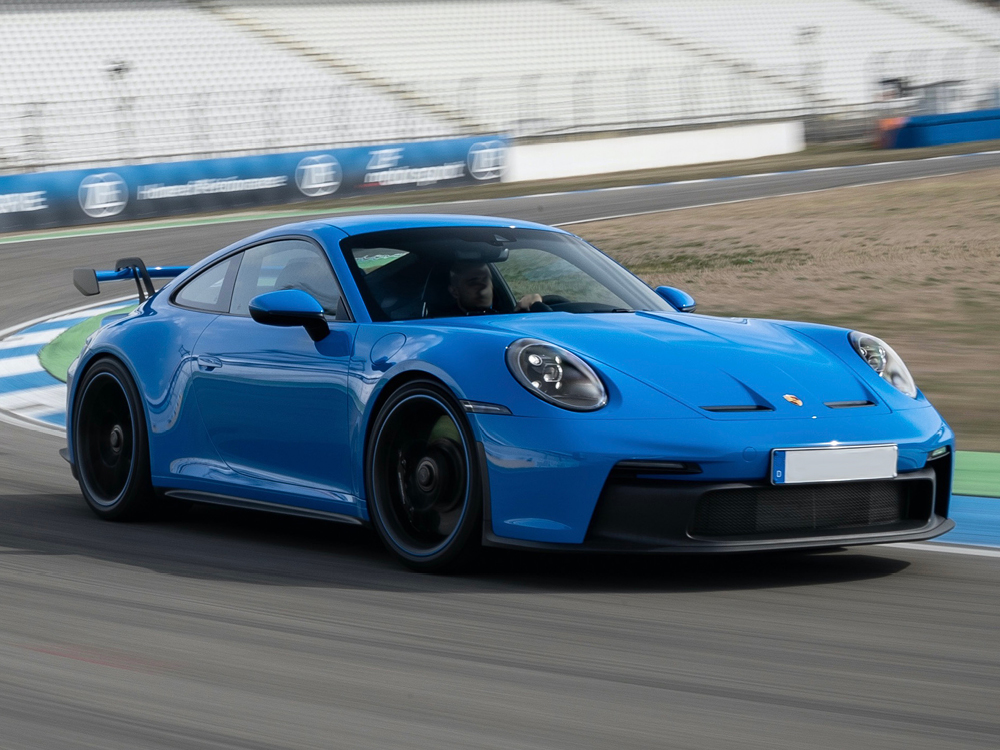 If you seek the ultimate in power and speed from a Porsche 911, you need to shop in the 911 Turbo aisle, where the horsepower reaches 640 and top-speed bragging hits 205 mph. But if you want the ultimate visceral 911 experience on road or track, the new 2022 911 GT3 is your car, providing you can you live with “just” a 199 mph top end.

The new 992-series 911 GT3 succeeds the 991.2 version and carries over its raucous 4.0-liter flat six, making the GT3 once again the only 911 with a naturally aspirated engine. In fact, it’s one of only a few non-turbo Porsche models remaining, the others being in the 718 Boxster / Cayman branch of the family.

The GT3 remains the modern 911 model most connected with its racing roots. And this is only the beginning. An even racier RS version is promised.

The Porsche 911 GT3 traces its ancestry, at least philosophically, to the 911 RS 2.7 of the 1970s, a race homologation special that became a collector favorite. With that car, Porsche had initially underestimated its customers’ appetite for a lighter, race-bred version of the 911 for the road. Since then, such models have peppered the 911 lineup.

The GT3 continues that tradition, serving as a homologation special for the various Porsche Carrera Cup one-make series races held globally. Many of today’s pro drivers came up through these Porsche series, including the top Porsche Supercup, a support series for Formula One.

What Makes the GT3 Tick?

It’s been a few years since we last checked in on the GT3. The new GT3’s 4.0-liter flat-six makes 502 horsepower. That works out to 125 hp per liter, or “specific output” in engineering lingo. That is an astounding figure for a naturally aspirated production car engine. For comparison, the Ferrari 812 Superfast’s 6.5-liter naturally aspirated V12 registers an also-astounding 121.4 hp per liter.

The GT3 engine revs to a stratospheric 9,000 rpm, and with no turbos to muffle the exhaust note, it sounds like it means business.

You can choose between a six-speed manual or seven-speed dual-clutch PDK automatic in the new GT3. Either way, the car is priced the same $161,100 to start. That’s before you dig into the endless Porsche option list, including paint-to-match.

The manual has an automatic throttle-blipping feature for smoother downshifts, but the expert heal-and-toe drivers can choose to turn it off and do the same thing on their own.

Even if you opt for the PDK, the GT3’s shifter looks like a manual stick-shift to fool the neighbors. At 3,164 pounds, the PDK-equipped GT3 is just 38 pounds heavier than with the manual transmission.

As with other Porsches, the PDK is ultimately the quicker version. Porsche claims 0-60 in 3.2 seconds for the PDK-equipped GT3, and 3.7 for the manual transmission. The manual has a slight edge in top track speed, 199 mph versus 197 for the PDK.

The GT3 lives up to its lightweight heritage, being a significant 228 pounds lighter than a base 911 Carrera. Underneath, the new GT3 is the first 911 to use double-wishbone front suspension, taking inspiration from the 911 RSR racecar version. The suspension is adjustable for track use (toe angle, camber, anti-roll bars) and also features new adaptive shocks.

The wheels and tires are huge: 9.5 x 20-inch in front with 255/35 ZR20 Michelin Pilot Sport Cup 2 tires, and 12 x 21-inch on back with 315/30 ZR 21 tires. At 16 inches in diameter, the GT3’s front brakes are as large as the wheels on a 1995 Carrera. The rear brakes are 15 inches. Porsche’s optional carbon ceramic brake package should be considered mandatory for those planning lots of tracking.

From early previews, it seems Porsche has once again nailed it. The GT3’s chassis setup provides “tremendous cornering grip and unfiltered feedback,” according to Car and Driver, which also heaped praise on its electrically assisted steering.

Despite the GT3’s lightweight diet, this road-and-track special does not skimp on cabin comfort or tech, but simply gives it a more serious look. You get standard Sport Seats Plus and can choose optional 18-way power Adaptive Sports Seats Plus. (Everything from Porsche seems to be called “Plus” these days.) For best grip on your body through the curves, get the $5,900 full bucket seats with carbon fiber shells.

The infotainment system is the same as on the standard 911 models, and it’s a good one, with a 10.9-inch touchscreen, wireless Apple CarPlay and a Wi-Fi hotspot. You can add a Bose surround-sound audio system for $1,600. That seems like a bargain compared to the $590 for RaceTex (faux suede) sun visors.

If wings are not your thing, the Touring option (no charge) uses the more subtle automatically deploying rear spoiler. You can also raise or lower it using a selection in the car’s center display touch screen. That’s the only difference between the two model trims.

On a downbeat note, if you already ordered a 2022 Porsche 911 GT3, there’s a chance it is now sitting on the bottom of the Atlantic Ocean onboard the car transport ship Felicity Ace. The ship was carrying about 4,000 VW Group models destined for the U.S., including about 1,000 Porsches, when it burned and sank near Portugal this past February.

Cheer up, because the carmaker has said it will eventually replace those cars for customers rather than make them go to the back of the line. In the meantime, you can get a novelty license plate frame that says, “My other car is a Porsche GT3, but it sank.”

If you were planning to order a new Porsche 911 GT3, you might want to do that soon.