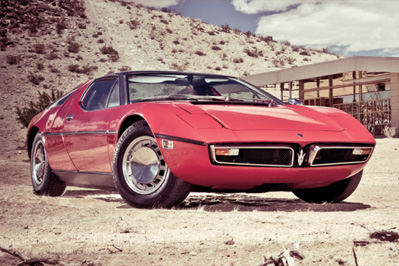 Bora, Bora, Bora: The Supercar that Took Ferrari by Surprise

The shockwave caused by the Lamborghini Miura must have certainly rattled the foundations at Maserati and Ferrari, and so, at the end of the 1960s, mid-engine supercars from those two rivals were inevitable. But Ferrari had only just introduced its front-engine 170+ mph 365 GTB/4 Daytona, and the market clearly had room for both types of GT, at least for a while.

Maserati would issue its mid-engine supercar, the 1971 Bora, four years after the Miura went into production. Production continued until 1978. Amazingly, four decades later, you can lease the Maserati Bora or lease the Lamborghini Miura, or any of these Italian masterpieces through Premier Financial Services with the ease and transparency of its Simple Lease. 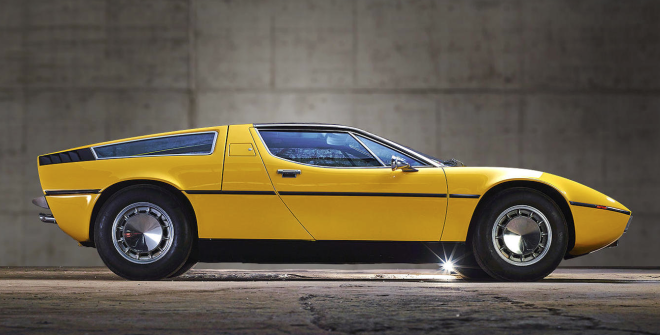 A mid-engine location would be the only common thread between the Lamborghini Miura and the Maserati Bora. One could never call the Bora a copycat of anything. Where the Lambo was raw and raucous, the Maserati was more comfortable and refined and, according to contemporary road tests, a very stable high-speed handler.

Having carved out a niche for polished high-speed grand tourers, Maserati aimed for a more daring flagship after France’s Citroen took control in 1968. Yet, luxury and finesse would not be sacrificed. 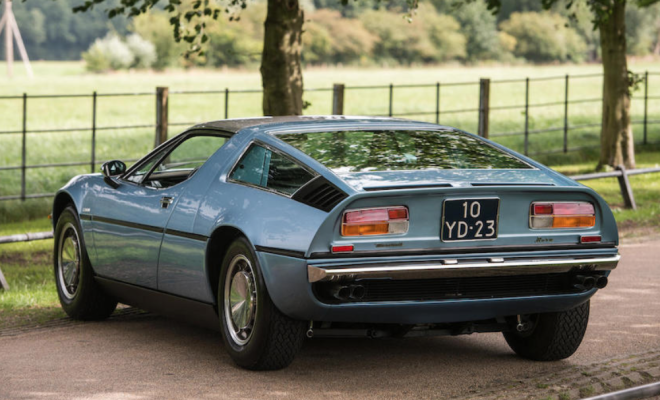 For the Bora’s design, Maserati again drew on the talents of Giorgetto Giugiaro, who had done the Ghibli while in Ghia’s employ. He did the Bora as a project of the firm he founded, Italdesign. The blade-like lines seen on the Ghibli were evident in the Bora, but this was also a figure of subtle curves, not nearly as severe as Marcello’s Gandini’s Lamborghini Countach.

The Bora took its name from a type of cold, sometimes hurricane-force wind that blows off the Adriatic Sea. (Trivia: Volkswagen later appropriated the Bora badge for what Americans know as the Jetta.) The radically new Maserati used a steel monococque (unitized) structure, with steel body panels. The stainless steel roof and A-pillars and glass-paneled fastback roofline were unique in the supercar segment, and we’d see Giugiaro later apply a similar theme to the all-stainless DeLorean. The Merak was essentially a V6 version of the Bora, but with a “flying buttress” roofline lacking the glass panels, and a miniscule “+2” back seat. 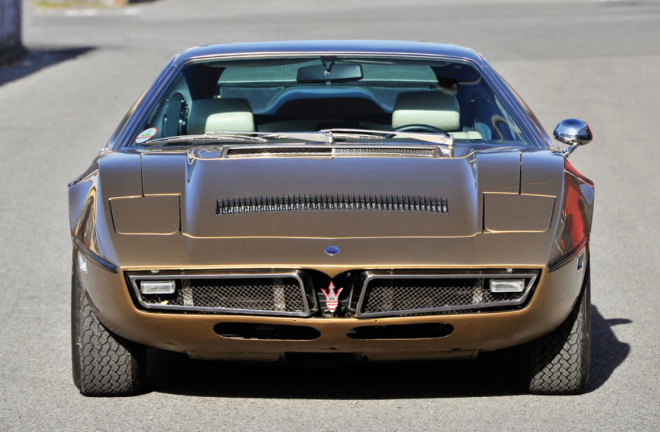 Maserati repurposed its great V8 from the Ghibli, which would remain in production with the Bora for two years. Its roots tracing to the 450S sports racer of the 1950s, and using four two-barrel Weber carburetors, the V8 was a tractable, responsive engine ideally suited for Maserati’s largest market, the United States. (About half of the 560 or so Boras made were exported to the U.S.)

All U.S. Boras would get the 4.9-liter version of the engine. Desmogged to a still respectable 280 hp, and 339 lb.-torque, the engine gave the Bora a performance character closer to the Ford V8-powered Detomaso Pantera than the V8 models Ferrari would introduce in this era.

Writing for Motor Trend, Eric Dahlquist said: “About halfway through the first curve we realized we could have taken it half again as fast, because the Bora sticks without the twitchiness of other mid-engine cars, most of which are a hair-raising handful to control at anything near their limits.”

The Bora was designed to be comfortable for high-speed driving, and used double-pane glass between the cabin and engine to keep the sound level tolerable for conversation. Car and Driver said: “After the test, we are convinced that the Bora is the only one of all the mid-engine missiles that is also a useful automobile.” 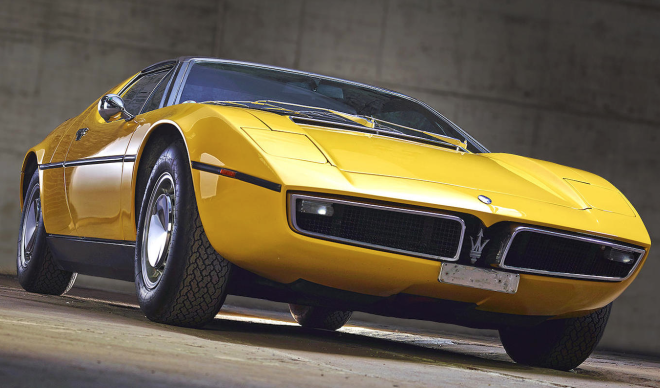 Maserati’s then-new parent, Citroen, had revolutionized ride and handling with its hydropneumatic suspension, which used pressurized hydraulic fluid and nitrogen-filled spheres for springing and damping. The Bora used Citroen’s hydraulic technology (with green-dyed LHM fluid) for braking and for operating the headlight doors, driver’s seat height and the adjustable pedal array – but not for the suspension and steering. Uniquely, the Bora’s driver’s seat did not adjust fore-aft. Rather, the pedals adjusted and the steering column telescoped.

Lease a Maserati Bora with Premier

Today, the Bora remains more accessible than the Miura. Last year at Scottsdale, Gooding sold a 1973 U.S. model for $264,000. A Lamborghini Miura P400S brought $1.15m at the same auction.  Though certainly in different ballparks, both of these Italian classics are just as accessible with the PFS Simple Lease, from an auction or a dealer.

Beware: There are some great Boras out there, but also some frightening “project cars.” PFS will only lease the former, and our Maserati experts would be happy to help you put one in your collection.