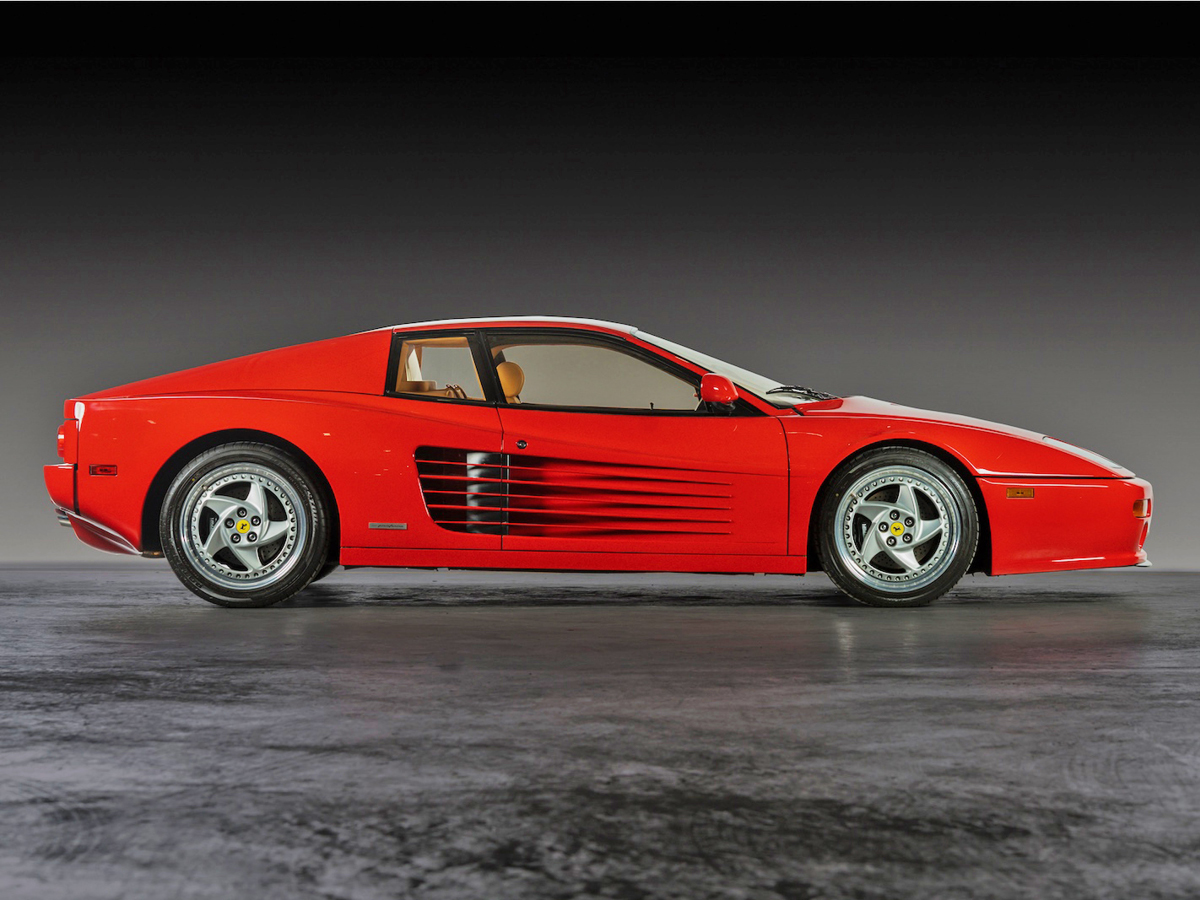 At first glance, the car on your screen would appear to be a Ferrari Testarossa, the wild supercar that defined the genre in the Eighties and even starred on “Miami Vice.” In fact, it is a Testarossa, just as the first refresh of that car, the 512TR, was a Testarossa. (That’s what “TR” stood for.)

The F512 M continued the Testarossa / 512TR evolution, and Ferrari would make just 501 of this final version before sunsetting its flat-12 supercar series. Demand was high for the 75 cars sent to the U.S., and RM Sotheby’s Miami auction in December is offering a two-owner model from the Youngtimer Collection with 10,200 miles. The pre-sale estimate is $400,000-$450,000.

Ferrari refers the limited-production, race-inspired middies: 288 GTO, F40, F50, Enzo and La Ferrari as its “supercar series.” So what about Ferrari’s first mid-engine 12-cylinder series, which started with the Berlinetta Boxer of the Seventies, evolved to the Testarossa in the Eighties and culminated with the F512 M in the Nineties?

Those were genuine supercars, were they not? While the V12-powered F50, Enzo, and La Ferrari are more aligned with the earlier 12-cylinder middies, they’re grouped with the V8-powered 288 GTO and F40 due to their race-derived engines, use of high-tech lightweight materials and very low production numbers.

Those earlier mid-engine 12s were sensational machines when new then and remain so today. With daring Pininfarina design, they rivaled the Lamborghini Countach for poster-car popularity but far exceeded it in sales success.

When a V12 Goes Flat

The flat-12 engine used in the Testarossa-series cars was first used in the Berlinetta Boxer in 1973 and was related to Ferrari’s 4.4-liter V12 of the period. The BB models were never officially imported to the U.S., a major loss for American Ferrari buffs.

Did you know that the Testarossa / 512TR / F512 M flat-12 engine is considered a V12. How’s that? Ferrari’s traditional V12 of the period used a 60-degree angle between the cylinder banks, which was thoroughly conventional for a V12. But a V12, even one made from aluminum, is a big hunk of weight. So, for its Formula One and sports-racing cars of that period, Ferrari opened the V all the way to 180 degrees, flattening the engine to lower the car’s center of gravity.

Despite the Berlinetta Boxer name of the first flat-12 model, the engine was not a “boxer,” as in a Porsche 911, a Subaru, or the original Volkswagen Beetle. In a boxer engine, each piston / connecting rod has its own crankpin, so that each piston in a pair moves in opposition to the other. In Ferrari’s 180-degree V12, two opposite pistons share a crankpin. That means one is going “up” in its stroke, while the other is going “down,” though in a flat plane, of course.

Now that we’ve gotten that fun tech bit out of the way, let’s get back to the car. The Testarossa started with 380 horsepower from its 5.0-liter flat-12, which was increased to 428 horsepower in the 512 TR. That model also introduced revised front styling, 18-inch wheels, and other upgrades.

Ferrari made the 512 TR until 1993, and for 1994 the F512 M as the final version of this series. The D512 M debuted a new and sleeker look up front, with covered headlights replacing the retractable units of previous models. This followed an industry trend to meet pedestrian protection regulations coming on stream in Europe and also gave the F512 M a resemblance to Ferrari’s F40.

Out back, Ferrari finally ditched the Testarossa’s louvered horizontal lights for the automaker’s more familiar round lenses. The iconic industrial-size cheese grater radiator air intakes from the Testarossa remained, however.

And yes, that is a five-speed manual transmission you see in photos. The flat-12 Ferraris never used the F1 transmission, which arrived two years after the series ended.

Ferrari fans know “M” stands for “modificata,” meaning modified. The evolution from 512 TR to 512 M was more than skin deep. Ferrari updated much of the car. The engine gained higher compression, titanium connecting rods, and a lighter crankshaft. Output climbed to 440 horsepower, and the top track speed was 196 mph.

The car offered by RM Sotheby’s is #52 of the 75 U.S. cars, as confirmed by an etched plaque on the center console and a signed letter from Ferrari on official letterhead.

The car was delivered to its first owner in early 1996 at Cavallino Classics of Scottsdale, Arizona. He who took it to Nebraska and drove it for 9,900 miles. The consignor bought it in 2009 and exported it to Kuwait to join his Youngtimer Collection. He added just 300 miles since then, and the car is reported to be up to date on some very expensive services.

The F512 M is considered the Testarossa at its pinnacle, the last of the marque’s analog flat-12 supercars. After three decades, it can still snap necks even while standing still.