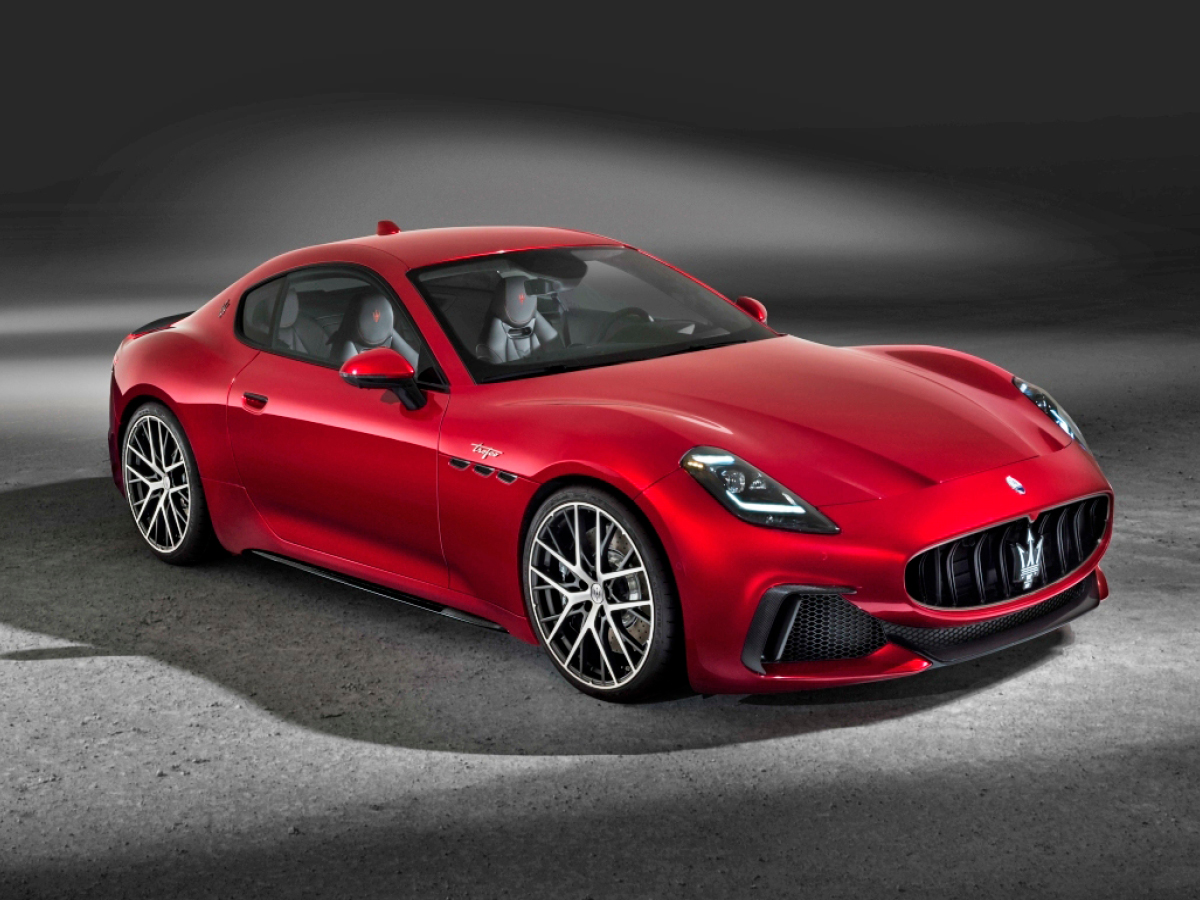 How has Maserati been doing since its divorce from Ferrari? Just fine, thank you. As the only luxury division of the global Stellantis empire, Maserati has emerged with its strongest model line since the 1960s. The newest models include the MC-20 supercar and a new high-performance Grecale SUV. And, on October 3, Maserati officially unveiled the new GranTurismo.

As Ferrari grapples with how to face the EV future, Maserati will already be there. This stunning new coupe will offer both traditional ICE and EV model choices and will be joined by a convertible. Maserati, it seems, will be alone (as far as we know for now) in offering a premium luxury GT in both gas and electric forms on the same chassis and with the same body. It is a remarkable feat, given that while packaging an electric powertrain is not difficult in such a car, packaging the battery pack is.

The gas-fueled Maserati GranTurismo arrives in spring, with the electric version coming in late 2023. Here’s a look.

Though clearly an evolution of the previous model’s design, the new GranTurismo is a new car, built with 70 percent aluminum. It shares similar dimensions with the previous car. Meanwhile, in redesigning the GrandTurismo, Maserati has also moved it further up the premium food chain. Sources point to a $170,000 starting price, versus about $135,000 for the previous base coupe back in 2019. That’s still below Aston Martin and Ferrari, but above the new Mercedes-AMG SL.

Maserati will offer the GranTurismo in three versions, following the same tiered structure as the Grecale. The “base” model ICE version is called Modena, then comes a more powerful Trofeo and finally the EV, called Folgore, which means lightning in Italian. All electric Maseratis will wear that badge.

The two ICE models use different versions of Maserati’s 3.0-liter twin-turbo V6, a new engine developed fully in-house. Maserati calls the engine “Nettuno.” That’s Italian for Neptune, the Roman god of water whose trident spear inspired Maserati’s marque badge. In the GranTurismo Modena, the V6 gives 490 horsepower and 443 lb-ft of peak torque. These figures jump to 550 hp and 479 lb-ft in the Trofeo, still down from 621 hp in the MC-20.

Both engines are teamed to an eight-speed dual-clutch automatic transmission and standard all-wheel drive. That’s something you don’t get from Aston Martin, and Ferrari uses AWD only on the new Purosangue. The Folgore EV version will also be AWD, achieving that using separate front and rear motors.

Maserati says the GranTurismo Trofeo should do 0-60 in 3.5 seconds, and this version will achieve the all-important cocktail party boast-worthy 200-mph top speed. Those figures happen to be spot-on with the Ferrari Roma, which uses a twin-turbo V8, but no AWD. The Roma starts at about $226,000 before options, and the GranTurismo Trofeo may not be much below that.

Like the Roma, the Maserati GranTurismo positions its front-mounted gas engine far enough behind the front axle line for the setup to be called “front-mid.” It’s not unusual; Nissan has done that with the Z-car and some Infiniti models for many years. The Corvette was similar until recently switching to a true mid-engine layout.

Aside from its AWD, the new Maserati GranTurismo offers something else the Ferrari Roma does not: room for adult passengers in the rear seats. Ferrari calls the Roma a “+2” while the Maser is a full four-seater. We would not expect that to deter Roma buyers, but again, it’s a difference that helps establish the new Maserati as a unique entry in the segment.

The GranTurismo Folgore is the heavyweight of the GranTurismo line, both in power and, well, weight. Three electric motors – one powering the front wheels and one each for the rear wheels – yield a rousing 760 horsepower. If the Folgore version’s weight sounds a little porky at nearly 5,000 pounds, it is. But the electric motor trio will easily shrug it off with a 2.7-second 0-60 sprint, says Maserati. That’s getting into hypercar territory.

Maserati estimates 280 miles on a charge in the European WLTP test, which might translate to about 200 or so miles in the U.S. EPA test cycle. In any case, Maserati is leaving the EV range leadership race to others.

The Folgore’s 92.5-kWh lithium-ion battery pack runs in a T-formation down the car’s spine, spreading out behind the back seat area. That enables a low seating point and optimally focuses the battery’s added weight near the car’s center. Electronically controlled air suspension comes standard.

In case you miss that great Maserati engine sound, company engineers have created one that digitally blends the intensifying hum of electric motors revving up with a Maserati V8. It should be interesting, especially when using Launch Control for maximum acceleration.

True to Its Heritage

You can expect the usual level of Maserati’s attention to luxury detail in the GranTurismo, which features a 12.3-inch digital gauge cluster, as seen in the MC-20. A 19-speaker Sonus Faber audio system comes standard, which should give both the gas engine and the Folgore’s warp drive/V8 mashup a sonic run for their money. The Ferrari-Maserati divorce seems to have put the Italian supercar universe back in order, with Maserati shining as its brightest self in a long time.