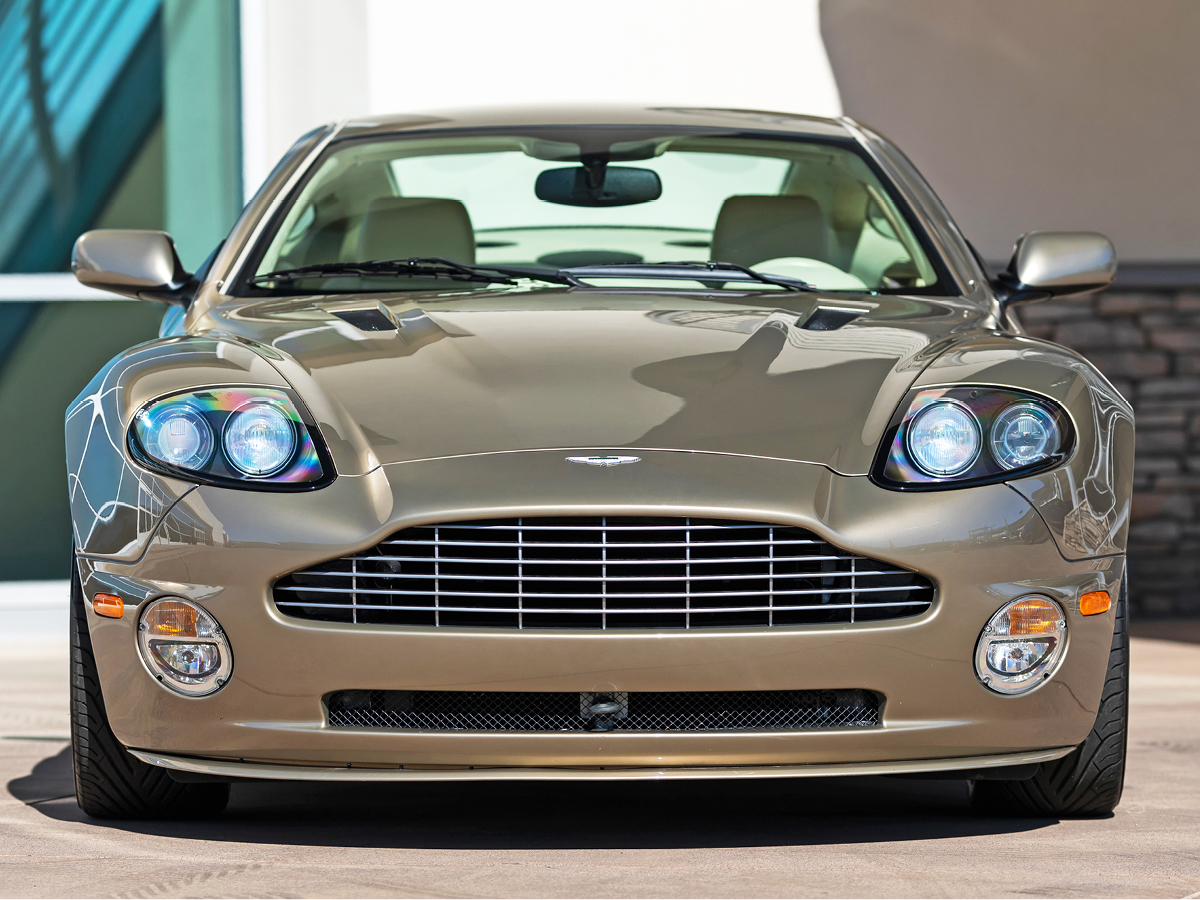 Where would James Bond – both the character and the lucrative film franchise – be without Aston Martin?

While Bond fans were impressed by the Lotus that turned into a submarine for Roger Moore’s version of 007 in 1977’s “The Spy Who Loved Me,” they were less enthused with the marketing-driven BMW car placements in the Pierce Brosnan period. When Brosnan’s Bond finally got a gadget-filled Aston Martin Vanquish for “Die Another Day” in 2002, all seemed right again.

Bond wasn’t the only one happy for Aston Martin’s return to the fold. Automotive media were floored by the V12-powered Vanquish, as were owners. While the DB7 had graduated from a supercharged inline-six to a V12 by then, the Vanquish was the true bad boy of the line. (A second-generation Vanquish was built from 2012-2018.).

At its Amelia Island auction, RM Sotheby’s is offering the chance to acquire a low-mile 2005 Vanquish S. Part of the Michael Fux collection until 2018, and with just under 1,700 miles showing, the Glengarry Gold Aston Martin has a pre-sale estimate of $125,000 – $150,000 and is offered without reserve. Tempted?

Muscling in on the Maranello

With the DB7 having put Aston Martin on firmer footing in the 1990s, the marque was able to focus attention on higher segments. The company sorely needed to retire the last of the V8-powered Virage-based models that dated from the late 1980s. Also, the Ferrari 550 Maranello, issued in 1996, had made front-engine V12 GTs cool again.

Where the DB7 had been based on a much-modified Jaguar platform, the Vanquish was all-new underneath, while using a tweaked version of the DB7’s V12 engine. The Vanquish chassis used a combination of bonded aluminum with a carbon-fiber backbone. The body panels were aluminum – and what beautiful body panels!

Designed by Ian Callum, head of Jaguar and Aston Martin design while the two brands were under Ford ownership, the Vanquish would influence future Aston Martin designs. Two decades later, it still turns heads. The Vanquish interior was striking in its use of simple forms, contrast, and metallic trim.

Even with its generous use of lightweight material, the Vanquish still weighed just over two tons. The Ferrari 550 Maranello was about 200 pounds lighter. For the Vanquish, Aston Martin tweaked the 5.9-liter V12 to produce 460 horsepower, up from 414 in the DB7 V12. That was 19 hp short of the Maranello’s V12, but the Vanquish performed on par with the Ferrari.

The Vanquish came standard with a six-speed automated manual transmission. Interestingly, it used the same electro-hydraulic mechanism that Magneti Marelli was supplying to Ferrari for the F1 transmission option. Both the Vanquish and Maranello could do 0-60 mph in the low-four second range and top out at about 190 mph.

In 2004, a Vanquish S arrived with more power, enhanced handling, and styling tweaks. The 5.9-liter V12 gained revised cylinder heads, fuel injectors and computer programming. The net result was 520 horsepower, a 60-hp boost over the standard Vanquish, which remained available for a couple more years.

The Sports Dynamics package that was optional for the regular Vanquish was standard for the S model. This added stiffer suspension and quicker steering. The Vanquish S brakes were also larger.

Design updates were subtle, but functional. A redesigned trunk lid was said to enhance balance and stability at speed. Up front, a six-slat grille replaced the nine-slat design, and a splitter was added to also enhance high-speed stability.

On a historic note, the Vanquish was the last Aston Martin to be built in the company’s Newport Pagnell facility, which still serves as the Aston Martin Works classic car department.

The Vanquish S offered by RM Sotheby’s wears its elegance like a disguise for a wild animal. The car still wears the personalized door sill plaques installed for Michael Fux, which could be replaced.

The original Aston Martin Vanquish and Vanquish S set the foundation for the marque’s continuing line of V12-powered front-engine supercars. It remains a pivotal model in the marque’s history and deserves a place in any Aston Martin collection.