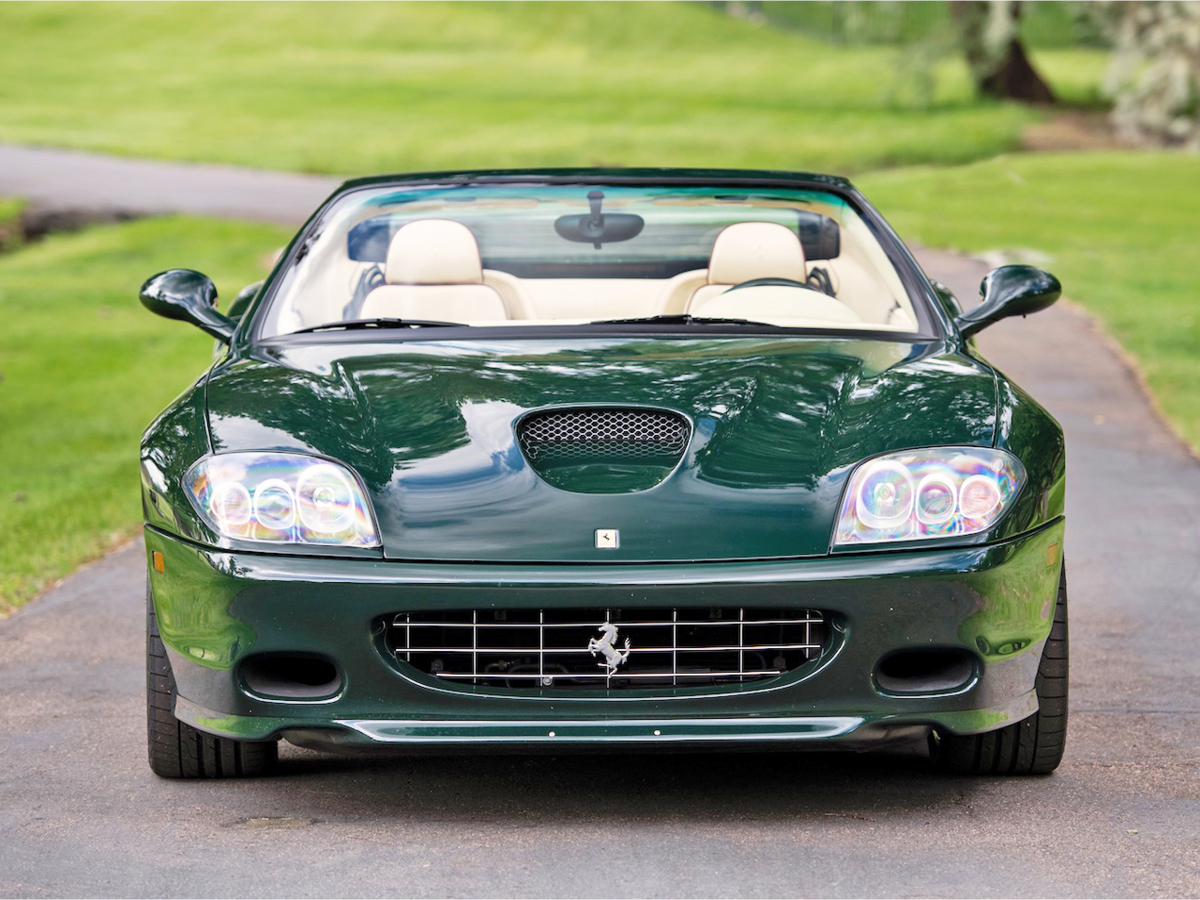 Go Ahead, Flip Your Lid

Never underestimate Ferrari’s ability to top itself, and in the case of the 2005 Ferrari Superamerica, you can take that literally. Introduced in 2005, the Superamerica was based on the 575M berlinetta, itself an evolution of the 550 Maranello that Ferrari brought out in 1996.

If the 575M was launched to improve on the 550 Maranello, what did the Superamerica top? As it turns out, it topped a car with no top – the 550 Barchetta from 2001. Based on the 575M, the Superamerica debuted a novel convertible roof design taken from a Italian concept car that was not a Ferrari.

Ferrari built 559 Superamericas, with 170 exported to the United States. At its Monterey auction in August, RM Sotheby’s is offering a Superamerica featuring special order paint and interior. It was enjoyed for nearly 12,000 miles, so it is not begging to be treated as a museum piece by the next owner.

Loyalty Has Its Rewards

You can always count on Ferrari to issue an open version of whatever coupe it introduces. In the case of the V-12 models, the open car is usually low-production and offered to the marque’s most loyal clients.

When the 550 Maranello’s Barchetta version followed five years after the berlinetta, it was quite a surprise, indeed. Instead of a convertible roof, it had no roof. There was only a temporary canvas top that could be installed in the event of a surprise rain shower. Ferrari, though, cautioned owners not to drive over 70 mph with the flimsy top in place.

Apparently, some loyal clients preferred something more than a fair-weather-only machine in their next open Ferrari.

Before the paint was even drying on the Barchetta, Ferrari was prepping the update to the V-12 berlinetta that would become the foundation for its successor. So, let’s start there. The “M” in 575M stood for “modificato.” The main modification over the Maranello was a 508-horsepower 5.75-liter engine replacing the older car’s 485-hp 5.5-liter version. This would be increased to 532 hp for the Superamerica, thanks to revised exhaust system.

The 575M was the first V-12 Ferrari road car to offer the F1 transmission, which allowed clutch-less shifts via steering wheel paddles, or a full automatic mode. A 6-speed manual transmission was still standard, but about 85 percent of buyers chose the F1. The 575M was also the first V-12 Ferrari to feature electronic adjustable suspension, offering “comfort” and “sport” modes, and this would be standard o the Superamerica.

Like the Barchetta, the Superamerica borrowed its name from Ferrari’s illustrious past, in this case the 1956 410 Superamerica. This rare car was part of a series of ultra-low-production elite models that concluded with the 1964-1966 500 Superfast.

Rather than fill up the 575M’s small trunk with a convertible top mechanism, Ferrari borrowed an idea for a new roof type from an Alfa Romeo concept car called the Vola. It had been designed by Leonardo Fioravanti, a name familiar to Ferrari buffs as a top Pininfarina designer responsible for many modern Ferrari models, including the long-lived 308/328 series.

The Ferrari Superamerica’s roof panel doesn’t lower. Instead, it pivots rearward on a special hinge to then lie flat on the trunk lid. The rear window, meanwhile, remains in place to act as a wind deflector. At the touch of a switch, flipping the lid takes 10 seconds.

That was not the top’s only trick feature. Ferrari called the patented roof panel Revocromico, with “revo” for revolving and “cromico” referring to the special electrochromic glass. Using a knob on the console, the driver or passenger can adjust the light passing through in five steps, from a very light blue tint to a very dark blue, never fully blocking the sun.

The glass is framed in a carbon fiber structure and shares its hinge with the trunk lid. That means, when the roof is flipped and resting on top of it, the trunk lid can still be opened.

Not surprisingly for a Ferrari elite model, the Superamerica offered by RM Sotheby’s features a slew of special options that pushed it well past the $315,000 starting price. The elegant Verde British Green and Crema leather interior were both special-order, as were the Daytona-style seats. The original owner also ordered carbon fiber interior trim and premium audio, plus the GTC handling package that added ceramic brakes, a sportier suspension tune, “sport exhaust” and unique 19-inch wheels. There’s no need to feel green with envy over this Ferrari Superamerica – just get ready to bid.