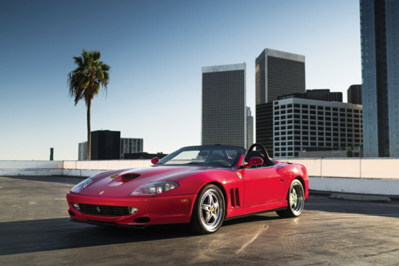 Feel the Rush of an Open Ferrari.

On its 1981 album, “Moving Pictures,” Canadian rock group Rush served up an ode to the pleasure of driving a sports car . They sang “a brilliant red barchetta, from a better, vanished time” — in a future when such activity might be forbidden. The song, “Red Barchetta,” drew inspiration from a short story, “A Nice Morning Drive”. It was published by Road & Track in November 1973, but substituted the protagonist’s MGB with a Ferrari 166, the sports car first associated with the unofficial “barchetta” label.

Those early Barchettas are of course multi-million dollar machines, but a modern tribute, the Ferrari 550 Barchetta Pininfarina provides a more accessible version, one that bears watching for rising values. At its January 2018 Scottsdale sale, RM Sotheby’s will offer a 2001 example. It is Lot #266, showing just 9,500 miles, with a pre-sale estimate of $475,000-$525,000.

Ferrari’s return to the front-engine V12 formula with the early-1990s 456 GT left many Ferraristi pining for something with more bite than that luxurious 2+2 offered. The answer came a few years later with the 550 Maranello, an homage to the 365 GTB/4 Daytona, but with far more modern performance and comfort. The new berlinetta naturally had some Ferrari clients pining for a roadster version, and Ferrari obliged a few years later.

First shown at the 2000 Frankfurt Motor Show, the 550 Barchetta Pininfarina included the name of the renowned design house and coachbuilder with which Ferrari had collaborated since the early 1950s. As in the 550 Maranello, the 5.5-liter, 479-horsepower V12 in the 550 Barchetta is a connection to a rear-mounted 6-speed transaxle. But unlike its berlinetta sibling, the Barchetta would not offer the F1 automated manual transmission.

The “Barchetta” name (Italian for “little boat”) recalled 1950s Ferrari racecars, with fairings rising from the rear to meet functional rollover bars. The rear of the car is a reshape in comparison to the berlinetta. Viewed in profile, the 550 Barchetta’s proportions might appear a bit awkward, with rather long overhangs for a car with a 98.4-inch wheelbase, but there’s no questioning the car’s striking overall beauty.

The 550 Barchetta earned its name, too, from its roof, or lack thereof. In creating an open version of the 550 Maranello, Ferrari elected to go the full purist route. Not only would the Barchetta not have a power top, but it wouldn’t even have an operational convertible roof.

Ferrari and Pininfarina produced a true fair-weather machine with the 550 Barchetta, equipping it with a temporary canvas top to be installed in the event of a surprise rain shower. In addition, Ferrari includes a warning that the Barchetta should not be drive past 70 mph with the flimsy top in place.

Performance was spellbinding for the time, with zero to 60 in about 4.4 seconds. It’s difficult to imagine anyone caring that the inferior aerodynamics of the open car (when compared to the berlinetta) dropped top speed from 199 mph to a mere 187 mph. The price for the Ferrari 550 Barchetta Pininfarina was about $245,000 new. 448 of this Ferrari went down the production line and loyal marque clients were quite pleased.

The cockpit, which featured Barchetta-specific sports seats, was pure Ferrari luxury with soft leather and faux suede. Discrete use of bright metal trim accented the cabin, including of course the traditional Ferrari shifter gate for the 6-speed stick shift. Cargo capacity was somewhat more generous than in the berlinetta.

The 550 Barchetta offered by RM Sotheby’s, the 357th built, is very red indeed. It is painted Ferrari’s signature Rosso Corsa over a grey leather interior. Further, it features a Becker audio system and glossy carbon fiber interior trim. This Barchetta shows 9,500 original miles and comes with service records. Purchased in Boston, the Barchetta moved to California, then Utah, and finally, Alberta. Perhaps a certain Canadian driving song had inspired the purchase.

“Drive like the wind, straining the limits of machine and man.”