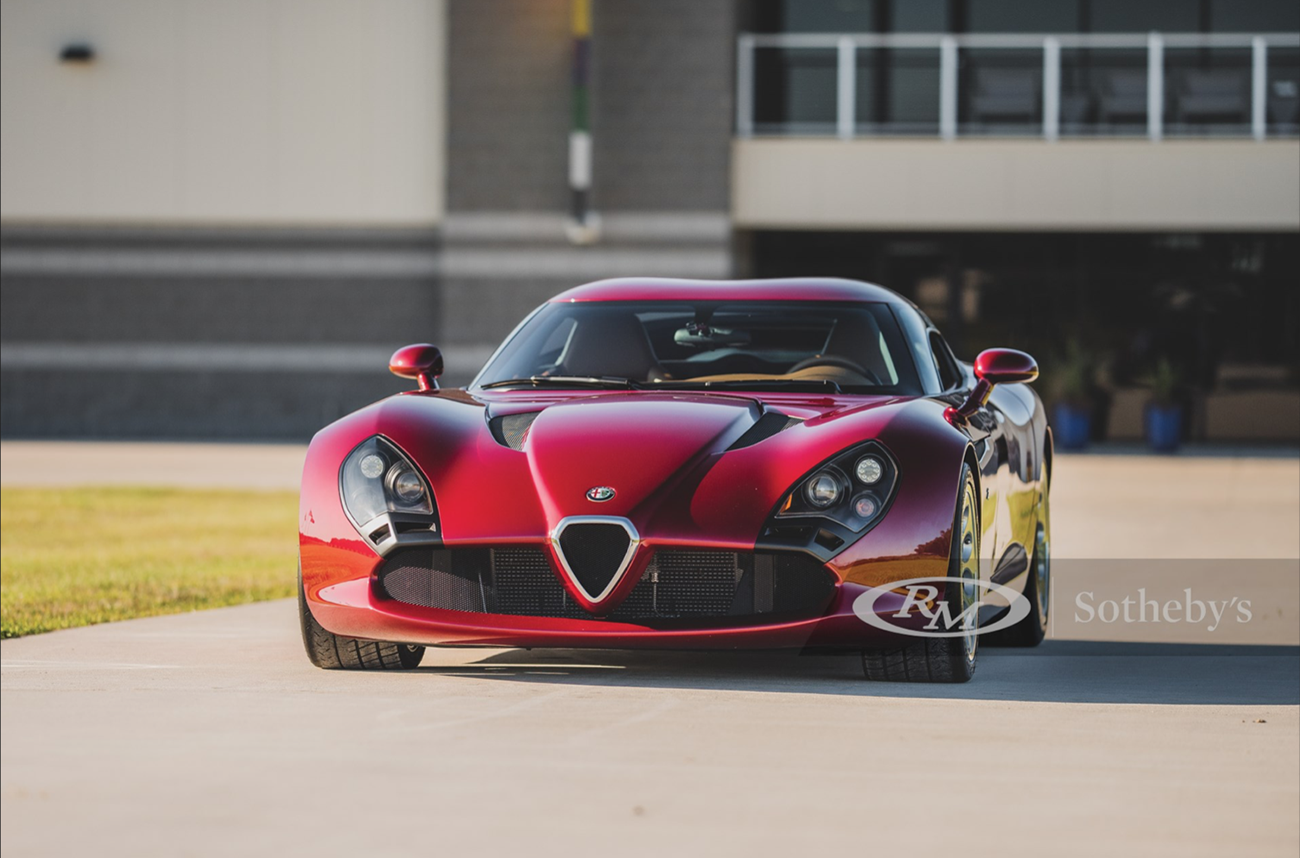 After that union ended in divorce, Chrysler’s next merger sent its DNA in the other direction, yielding one of the most unusual cross-breeds in Italian sports car history. Beneath its bespoke Italian carbon fiber suit by Zagato, the 2010 Alfa Romeo TZ3 Stradale is a Dodge Viper.

Just nine of these supercars were made. Each was built at a cost of $1m, according to RM Sotheby’s description of the one it sold at Elkhart Collection auction in October for $489k. It was virtually a brand new car, with just over 200 miles.

In 2007, Alfa Romeo issued the 8C Competizione, a new high-end sports car. It is based on a shortened Maserati GranTurismo chassis and using that car’s Ferrari-based V-8 engine. Fiat of course owned all three of those marques and in 2009 began buying Chrysler Corporation out of bankruptcy. (Full Chrysler ownership would come in 2014, and Ferrari has since been spun off as its own shareholder-owned entity.)

Alfa Romeo, now newly related to Chrysler, celebrated its 100thanniversary in 2010 in a most unusual way: by issuing what was essentially a rebodied Dodge Viper. This was not as crazy as it might still sound, and the clues lie in the name.

The TZ in TZ3 Stradale stands for Tubolare Zagato. It is a limited-production Alfa Romeo GT road and race car of the early and mid-1960s. The vehicle has a body designed and made by  Zagato. The TZ was a very small car (slightly longer than a Honda CRX) and ultra-light at just 1,460 pounds. That let it fly with a 112-horsepower 1.6-liter engine.

The coupe design indeed had a unique “tubolare” (tubular) look, with a coda tronca(truncated) tail design and unique three-panel rear glass treatment. Just 112 were made from 1963-1965. The TZ2 race version, with 160 horsepower, was yet another 100 pounds lighter. Just a dozen of those were built.

The original TZs were formidable on the track, finishing third and fourth in the 1964 Targa Florio behind a pair of Porsche 904s and ahead of four Ferrari 250 GTOs. The TZs also won class at Sebring, Le Mans and Nürburgring that year.

Flash forward to the 1990s. Dodge’s Viper was an absolute brute, viewed as a modern-day Shelby Cobra and powered by a raucous V-10. In 1998, a Dodge Viper built and run by France’s ORECA team took first in class and 11thoverall at Le Mans. That was just the beginning of numerous victories, including American Le Mans Series championships.

In 2011, a Viper ACR, a street-legal club-racing model, cut the Lexus LF-A’s 7:14.6 lap on the Nürburgring by nearly two seconds, setting a record for a production road car.

The Viper may have embodied the original Cobra’s spirit, but its GTS coupe iterations actually brought it closer to the basic concept of Ferrari’s early front-engine road/race berlinettas. It was not a stretch for Norihiko Harada, working for Zagato, to reimagine the Alfa Romeo TZ design as a larger car on the Viper’s 98.8-inch wheelbase chassis.

The resulting TZ3’s body, rendered in carbon fiber, features the rounded nose, covered headlights, “double bubble” roof and coda tronca tail with big round taillights that hark back to the original Alfa TZ. The side exhaust came right from the Viper, and the interior was all-Viper but slathered in custom leather.

The Alfa Romeo TZ3 Stradale was based on the chassis of the track-ready Viper ACR. The Viper’s aluminum V-10 produced pure American muscle car-style force by its sheer displacement (8.4-liters) while employing an “old fashioned” two-valves-per-cylinder and cam-in-block valvetrain. It was the antithesis of the small-displacement, high-revving double overhead-cam four-cylinder engines Alfa used to beat racing giants.

The TZ3 Stradale used the stock Viper engine. This gave 600 horsepower and 560 lb-ft of torque in the 2010 model. The six-speed manual transmission carried over to the TZ3 Stradale. In the Viper, that combo was good for an 11-second quarter-mile and top track speed of about 200 mph.

“Because of the Fiat Group-Chrysler/Dodge partnership, the TZ3 can be considered history’s first ‘American’ Alfa Romeo,” Andrea Zagato said at the time.  There would be a “second” of sorts. The Dodge Dart compact sedan introduced in 2013 was based on Alfa Romeo’s excellent Giulietta platform.