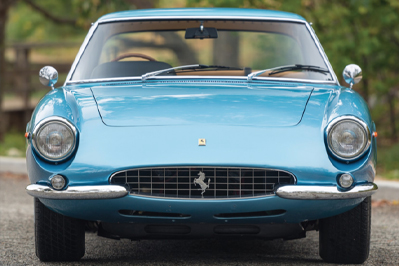 The Name Was The Story

Nostalgia, it seems, can work just as well for Maranello’s prancing horses as it does for Dearborn’s galloping ponycar. Ferrari has been reviving classic model names for many years, most recently with the 812 Superfast. That badge originated with the 500 Superfast, a big yet exquisitely sleek grand tourer built for the marque’s top customers from 1964-1966.

When Things Were Super

In Ferrari’s earliest days, every car it built was rare and elite. But always, there was the top-of-the-top for clients who were willing to pay whatever Ferrari or the coachbuilder asked. Ferrari honed that practice with the 410 Superfast and 410 Superamerica of the 1950s, continuing the lineage with the 1960-1963 400 Superamerica.

Hand-built construction of the next in line, the 500 Superfast, began the following year. The chassis came from a “regular production” Ferrari model, the 330 GT 2+2, of which 1,080 would be made through 1967. And so, this was not Ferrari’s most advanced platform of the period, using the 330’s solid rear axle with trailing arms and leaf springs, for example.

The “super” in Superfast came from the 5-liter V12 with six two-barrel Weber carburetors and making 400 horsepower. (The later models used three Weber carbs but kept the same hp rating.) That was by the European DIN rating system, not the SAE gross method used by Detroit at the time, so 400 meant 400.

Ferrari claimed a 3,100-pound weight for the 190-inch-long car, but Ferrari tended to understate weight. Still, the 174-mph claimed top speed was astounding and was the highest in the world for a road car at the time.

Pininfarina brought its full talents to bear for the 500 Superfast body. Beauty, even among Ferraris, is subjective, but the 500 Superfast must surely be counted along with the 250 GT Lusso as among the designer’s best creations for the marque. The long nose, which seemed predicted the style of the 1966 330 GTC, flows back to an upright greenhouse, which itself seemed inspired by the earlier 400 Superamerica.

The roofline sweeps into a delicately tapered tail, and the thin-pillar look of the 250 GT Lusso is evident. The days of combining such stunning style with excellent outward visibility are, sadly, long gone.

The 500 Superfast cabin offered the epitome of European GT luxury, with Connolly leather everywhere, a stereo and air conditioning. Although the 500 Superfast shared the 330 GT 2+2’s 104.3-inch wheelbase, it was strictly a two-seater, with an upholstered luggage shelf behind the occupants, like that in the 250 Lusso.

Ferrari built the 500 Superfast to order in two series. The first two-dozen cars used the 6-carburetor intake and a 4-speed transmission with overdrive. The front fender vents had three sections with a total of 11 slim louvers. The last 12 500 Superfasts were designated Series II and used the 3-carburetor intake. Plus, a 5-speed transmission and the fender vents divided into three sections.

The Ferrari 500 Superfast was everything you either remember or imagine Ferrari to be in the 1960s. Super-beautiful, super-powerful, super-rare and, of course, super fast.