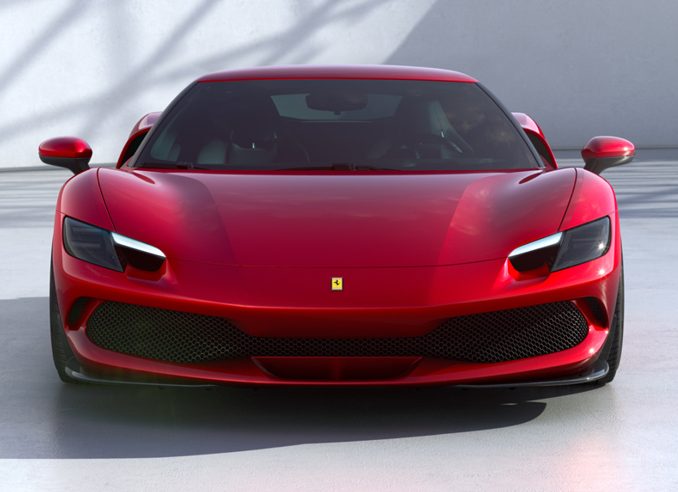 All those rumors of a V6-powered Ferrari turned out to be true. The Ferrari 296GTB unveiled on June 25 is a mid-engine model with a new V6, and it’s part of a hybrid electric powertrain that cranks out an astounding 818 horsepower.

Despite the V6, the 296GTB is not a new entry model for Ferrari and is likely to be priced above the V8-powered Portofino M, Roma coupe and possibly the mid-engine F8 Tributo, too. Maybe “entry hybrid” would be a good label, a new sibling for the SF90 Stradale.

European sources have reported the 296GTB could be priced around $321,000 when deliveries start there in early 2022. This new Ferrari hybrid comes to America a bit later, so get in line now.

By itself, the new twin-turbo Ferrari V6 yields 654 horsepower and 546 lb-ft of torque. Let that sink in for a few seconds. Those figures are mighty close to the 710 horsepower and 568 lb.-ft. of torque from the F8 Tributo’s current 3.9-liter twin-turbo V8.

In the 296GTB, a single electric motor, or what Ferrari lyrically calls the MGU-K (Motor Generator Unit, Kinetic) throws an additional 164 hp and 232 lb-ft into the game. Contrast that with the three electric motors in the Ferrari SF90 Stradale and Acura NSX (one in back, two in front for both cars) and two in the Porsche 918 Spyder (one each in front and rear).

Like the SF90 Stradale, the 296GTB uses an 8-speed dual clutch transmission. A 7.45-kWh battery resides under the cabin floor for a low center of gravity.

Ferrari engineers were so proud of the new V6’s sound that they nicknamed it “piccolo V-12” (little V-12) during development. Ferrari credits the 120-degree cylinder bank angle and specially tuned exhaust for the sound. That’s very wide for a V6 angle, which is more typically 60 or 90 degrees. The wider angle opens room to position the twin turbochargers in the valley between the cylinder banks.

The Ferrari 296GTB is certain to invite comparisons to the McLaren Artura, which also pairs a 120-degree 3.0-liter V6 with a hybrid system. The new McLaren hybrid is down nearly 150 horsepower compared to the Ferrari 296, though, and will also be less pricey.

While the V6 engine configuration has its own worthy heritage within the Ferrari family, the marque has so far been selective in how it touts that history. Media materials mention the V6 competition cars of the late 1950s and early 1960s, but there is no mention of Enzo Ferrari’s son, Alfredo. Better known as Dino, Alfredo was an engineer who pushed for V6 development. He was just 24 years old when he died from muscular dystrophy in 1956. As a tribute, Ferrari’s first V6 road car was badged Dino, not Ferrari.

So yes, Ferrari’s claim that the 296GTB is “the first 6-cylinder engine installed on a road car sporting the Prancing Horse badge” is technically accurate, if somewhat insensitive to history.

Ferrari claims a 3,241 lb. dry weight for the 296GTB, which is 67 pounds under the McLaren Artura. With Ferraris, though, it’s always best to wait for the U.S. production model before making any meaningful weight comparisons.

Fun fact: The 296GTB can cover up to 15.5 miles and hit 84 mph on battery power alone in eDrive mode, essentially the same as the SF90 Stradale.

Just A Hint of Retro

A bit shorter than the F8 Tributo, the 296GTB design is said by Ferrari to have been partly inspired by the marque’s 1963 250LM mid-engine racecar. One might see that classic model’s influence in the rear quarters, while others may see a hint of Lotus Evora in the profile and nose. The rear view makes a clear link to the SF90 Stradale.

The 296GTB’s body is aerodynamically primed to add up to 794 pounds of downforce at 155 mph. A “tea tray” front end directs air beneath the car to pull it toward the road.

The 296GTB’s cockpit exemplifies Ferrari’s recent move toward simplified dashboard layouts while integrating purely digital displays. A minimalist center console is a welcome difference from, say, the imposing barrier the Corvette puts between its driver and passenger.

It’s easy to predict that the new V6 hybrid powertrain will find its way into more Ferraris down the road. As for a naturally aspirated, mid-engine “entry” model named Dino, dreaming is free.