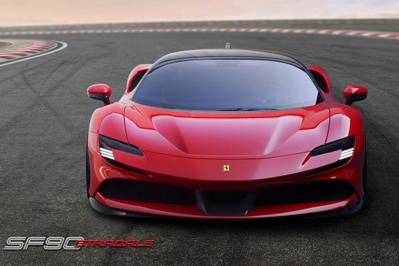 Another Step Toward Electric

The SF90 Stradale, named for “Scuderia Ferrari 90 years of racing,” is also Ferrari’s first mid-engine model with all-wheel drive, in this case using two electric motors to drive the front wheels. Ferrari has said it would not make an electric car, but the SF90 will run in battery mode for up to 16 miles. And when it does – get this – it operates as front-wheel drive! More on that in a moment.

The SF90 Stradale will for now be the marque’s top mid-engine model, but, notably, it is not positioned as the La Ferrari successor. 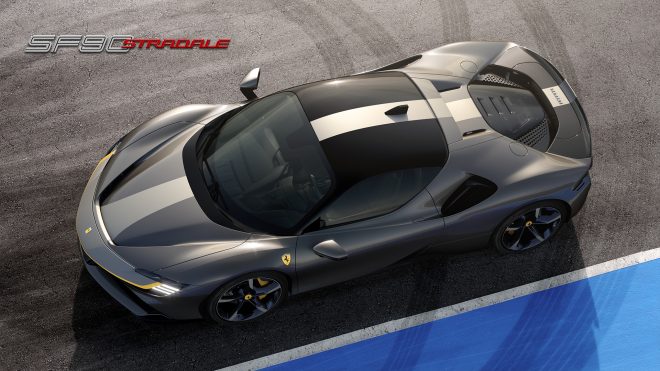 High-performance internal combustion engine (ICE) cars face an existential question: if so much of a supercar’s  car’s worth is wrapped up in acceleration and speed, how do you take on electrics, which are showing themselves to be hard to beat?

The $160,000 Acura NSX followed that pattern but put two electric motors up front, which not only help propel the car but also provide torque vectoring. The Ferrari SF90 Stradale operates like the Acura, including electric motor torque vectoring, but with a far more powerful ICE. It’s a 4-liter twin-turbo V8 making 769 hp and 590 lb-ft of torque by itself. (The Acura’s 3.5-liter V6, just for comparison, makes 500 hp and 406 lb-ft.)

Where the Ferrari F8 Tributo uses a 7-speed dual-clutch automatic transmission, the SF90 Stradale gets a new 8-speed. The rear electric motor sits between the V8 and the transmission. When coasting or braking, this motor recaptures energy and puts it back in the battery.

The three electric motors together kick in an additional 217 hp. It all adds up to 986 max horsepower when everything is on the boil. (The La Ferrari, you may remember, made 949 hp with its V12 and single electric motor.) That’s an awful lot of power to move the fairly svelte 3,461 pounds Ferrari says the SF90 Stradale weighs. Top speed is 211 mph. 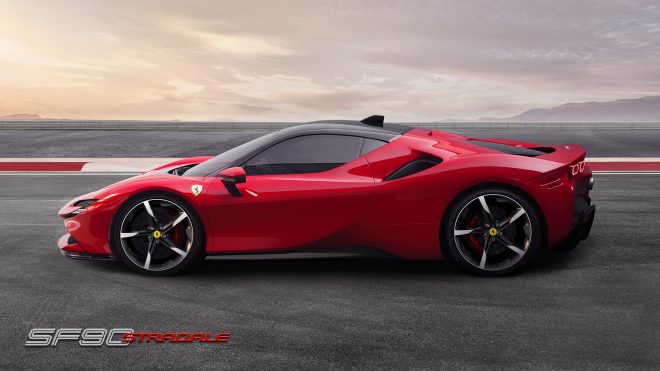 The SF90 Stradale would look like part of the family parked next to any of Ferrari’s recent middies, yet its design is unique. The overall shape, rendered in carbon fiber and aluminum, makes an art out of combining soft contours and hard edges. The front end, with thin, horizontally arranged lighting, quite different from its Ferrari siblings.

Naturally, there’s track-taming aero technology, including something called a “shut-off Gurney.” You’ve probably heard of a Gurney flap (named for racing legend Dan Gurney), a low-profile vertical lip at the edge of a spoiler to increase downforce. The Ferrari version essentially “shuts off” the downforce at high speeds to reduce drag. 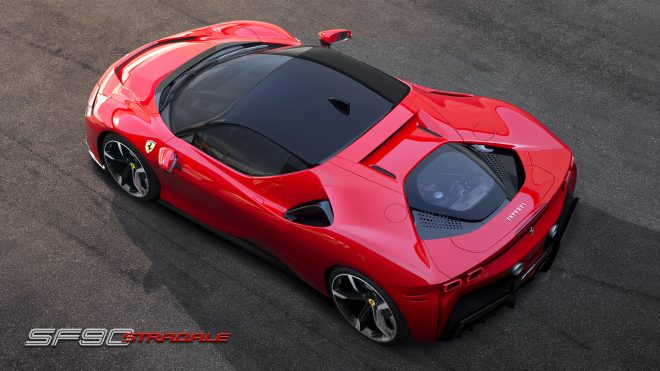 Strapped into your Ferrari SF90 Stradale, you’ll grip the wheel and set the driving mode with the eManettino switches. Tesla has its “Ludicrous” mode for maximum performance, and the SF90 Stradale has “Qualify,” which ensures the V8 and all three electric motors are working at full steam.

The other modes include EV, Hybrid and Performance. In EV mode, the car runs on battery power alone and, yes, driving only the front wheels. Ferrari says you can hit 84 mph on electrons alone, but even mildly enthusiastic driving will fire up the gas engine. Anytime you shift into reverse, the front wheels do the work, because the transmission does not have a reverse gear.

Maybe you’d use EV mode to sneak away from the house without waking the neighbors with the roaring V8. Or, maybe you want a preview of what an all-electric Ferrari might sound like. (Heresy!) 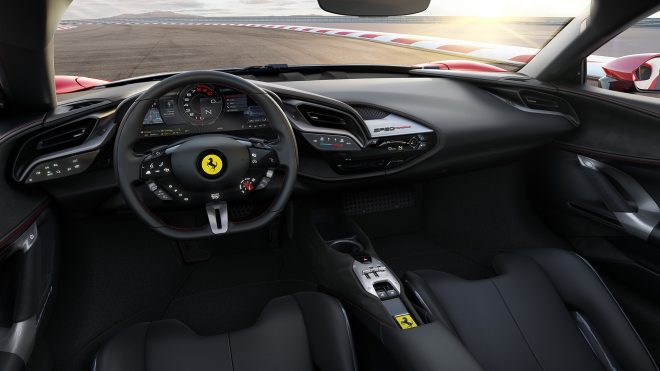 The SF90’s dash is high-tech, but at Ferrari, they still believe an instrument panel should look like an instrument panel, not a video arcade. A 16-inch curved screen displays the main instruments, navigation and other info in front of the driver, not off to the side. The passenger also gets a panel to look at. Yet, the execution and overall layout are as clean and elegant in a 21st-century way as the Ferrari 330 GTC’s was in the late 1960s.

Ferrari hasn’t yet said what this bionic masterpiece will cost, but you know the drill: if you’re not already on the list to get an SF90 Stradale, you’re probably not getting one. Fortunately, dreaming is still free. 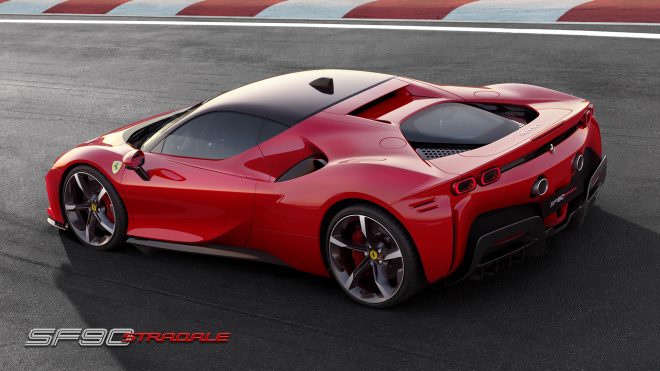