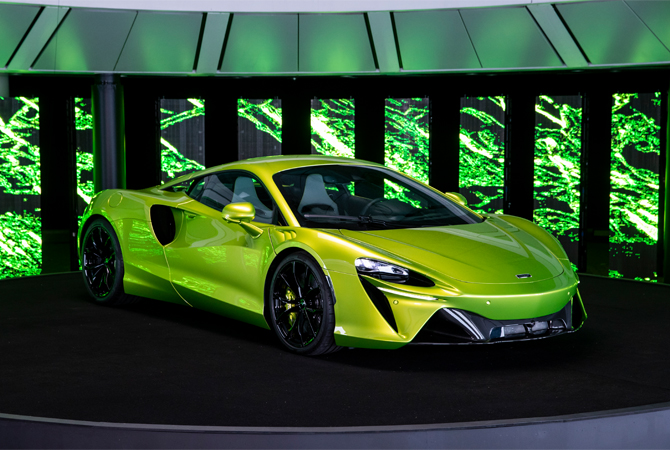 A McLaren Hybrid for the Masses

Do you like supercar fun facts? Here’s a good one about the 2022 McLaren Artura arriving later this year: it weighs less than a Toyota Prius Prime.

How could that factoid even matter in the slightest? It’s not that you’d be cross-shopping the compact economy car with a McLaren that can do 0-60 in 3 seconds and exceed 200 mph. It’s that both are plug-in hybrids. That makes the McLaren stated weight of 3,308 pounds for the Artura all the more remarkable.

Unlike McLaren’s first hybrid, the $1.5m P1 hypercar, the Artura will be a regular production model. It’s also expected to be priced less than one-sixth of the P1.

Following Its Own Road

The NSX is not a plug-in, so there’s no EV-only driving capability like with the Artura and SF90 Stradale. On the other hand, the Artura uses one electric motor rather than three, as the Acura and Ferrari do. And so, unlike those two, the Artura forgoes all-wheel drive capability, with the payoff being lower vehicle weight.

There’s no mistaking the Artura for anything but a McLaren. This is thanks to its general design theme and details like the “eye socket” headlights or prominent side air intakes for the engine. McLaren continues to produce smoother forms, however, which could further broaden the marque’s appeal.

In any case, the Artura’s body is so aerodynamically optimized that it does not use active aerodynamics or a rear wing that rises and lowers. The LED headlights and taillights are narrower than on other McLaren models, further refining the overall look.

Using an all-new V6 in the Artura instead of the V8 from McLaren Sports Series models cuts about 110 pounds of weight. However, electrification adds just under 290 pounds. Thus, much of the mission to keep overall weight down was accomplished by building the car around the new McLaren Carbon Lightweight Architecture (MCLA).

Unsurprisingly, the MCLA is lighter than the carbon fiber structure in other McLaren cars. In addition, it was designed to easily accommodate electrified power trains, so read into that what you will.

The 3.0-liter V6 is all-new and not derived from the V8. The engine uses a 120-degree angle between its banks, compared to the 60- and 90-degree angles more typically used on V6s. This wider configuration gives the engine a lower profile. It also makes more room for the twin turbos to be nestled between the banks. Just be glad you’re paying someone else to change the spark plugs.

McLaren Artura: By the Numbers

By itself, the aluminum twin-turbo V6 produces 577 horsepower and 431 lb-ft of torque. The redline is a stratospheric 8,500 rpm. For reference, that’s just slightly less than the twin-turbo V8 in the MP4-12C model, which launched the marque’s modern road car era a decade ago.

Located inside the 8-speed dual-clutch automatic transmission, the electric motor contributes an additional 94 hp and 166 lb-ft under acceleration. The Artura will accelerate from 0-200 km/h (0-124 mph) in 8.3 seconds. It will hit 300 km/h (186 mph) in 21.5 seconds. Its top track speed is electronically limited to 205 mph. In electric-only mode, the Artura can reach 81 mph, so the SF90 Stradale gets bragging rights with 84 mph in EV mode.

McLaren says the 7.4-kWh lithium-ion battery pack can be charged to 80 percent in about 2.5 hours. The stated 19-mile electric-only range, ideal for quietly sneaking out of your neighborhood, is based on the European test. It will likely be a bit less under U.S. EPA testing.

In bigger news, McLaren will offer driver-assist features. These include adaptive cruise control, high-beam assist and road sign recognition, but as options.

So, it seems like a tough choice: V8-powered McLaren GT or V6 plug-in hybrid Artura? As we always like to advise, get one of each.