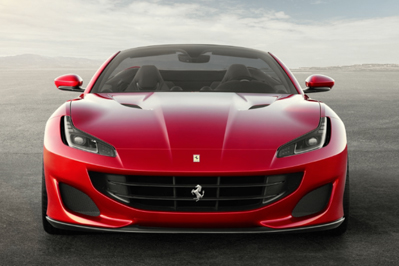 The California Gets A Successor.

There’s no denying the excitement when Ferrari unveils a new model. Maranello didn’t disappoint at the Frankfurt Auto Show in September when it introduced the 2018 Portofino, successor to the California model that had been offered since 2009.

The new Portofino is a luxurious 2+2 convertible with a retractable hardtop roof. Its twin-turbo V8 is mounted up front, behind the front wheels in a “mid-front” layout for good weight distribution. Say, isn’t that the California? Well, the Portofino is exactly the same kind of car as its predecessor, and it is based on a revised version of that car’s chassis. Ferrari, however, wants the new model to start with a clean slate. Pricing has not yet come out, but figure about $211,000 to start, according to Motor Trend.

Ferrari has been in a name-swapping frame of mind lately. When the marque redesigned its radical and somewhat misunderstood FF, Ferrari called the new car GTC4Lusso. It boasts a mélange of badges from past models. The GTC4Lusso features what many consider more attractive and focused styling than the FF. However, it’s exactly the same kind of car, a four-seat hatchback.

And now, in a similar evolution, the California becomes the Portofino. It takes its name from a pretty village on the Italian Riviera. Introduced in 2009, the California was a new entry model intended to broaden Ferrari’s market by attracting more casual luxury customers and more women.

Because the California was not as extreme in its performance persona as the marque’s V12 GTs and mid-engine V8s, some expressed skepticism about its place in the Ferrari family. And, there were probably some who felt Ferrari had overstepped the bounds of heritage marketing by borrowing the California name from one of its most famous and valuable models, the 250 GT California Spider.

Even Ferrari CEO and black sweater enthusiast Sergio Marchionne had expressed some skepticism about the California. Recently, Motor Trend quoted him speaking at this year’s Geneva Motor Show. “I like the car very much. However, it is the one that from an identity standpoint has the hardest time seeing itself as a full-blown Ferrari.”

When you look at Ferrari’s heritage, however, there is a tradition of offering models that were more touring-oriented alongside the racier cars. Consider the 1960s 275 GTB and GTS, for example. The latter a convertible with a softer engine tune and more understated design than the coupe.

From California to Portofino

The Portofino, while resembling the California, is far more sculpted, particularly at the sides. The front end more closely resembles the other models in the Ferrari family, and the rear end, which appeared bulky on the California, has been slimmed.

The Portofino is built on a revised version of the California chassis, now using more aluminum and other tweaks to drop some 160 pounds – so figure the new car weight about 3,900 pounds. The 3.9-liter twin-turbo V-8 was upgraded with new pistons, intake and exhaust systems and other tweaks to unbridle 39 more horsepower, now 591. Torque jumps slightly to 561 lb-ft, and the powerplant is once again teamed exclusively to a 7-speed dual-clutch automatic with paddle shifters.

Higher-rate springs and Magnaride dampers are said to reduce body roll. The Portofino gets electric power steering and the latest Ferrari E-Diff differential and F1-Trac traction control. Ferrari claims 0-100 km/h (0-62 mph) in 3.5 seconds, but since Car & Driver got 0-60 mph in 3.3 seconds in the 2015 California T, it may be even quicker than that. Top speed is about 200 mph.

The Ferrari California probably deserves more respect that it gets in some circles. Further, as the Portofino shows, there is a definite place in the marque’s lineup for such a fast, luxurious GT convertible that’s easy to drive every day.