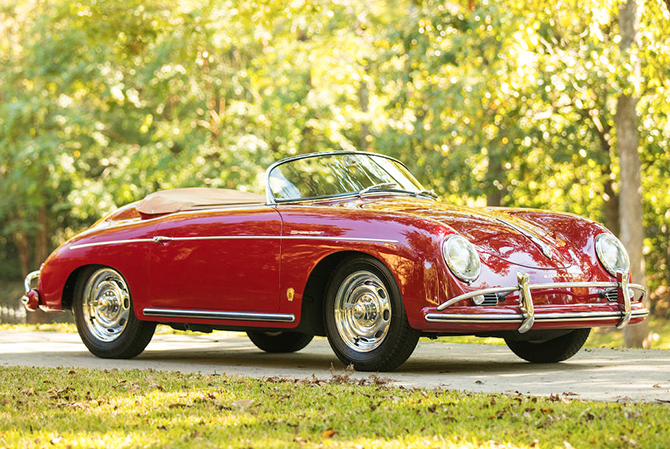 The spirit of the original 356 Speedster left a glow on this marque that has never dulled. Every Porsche collection should have one, and at the 2021 Scottsdale auctions, live and online, we found two red beauties:

Bonhams has a concours-grade restored ’58 speedster with a pre-sale estimate of $475k-$550k.

Sports Cars for All

In the early 1950s, the spectrum of sports cars available in in the U.S. stretched from the tiny, oddball 70-mph Crosley Hot Shot up to Ferrari’s 150-mph Ferrari 375 America. The British had a leg up on affordable roadsters. For example, Triumph’s TR2 winning hearts with 90 horsepower and a 100-mph top speed.

And then there was Germany’s fledgling Porsche, whose rear-engine 356 model was gaining popularity with racers thanks to light weight, tenacious agility and an easily tunable engine. Pricing over $3,500 put these little 55-horsepower bathtub-shaped cars at a disadvantage to the plucky Triumph, however.

Max Hoffmann, the visionary U.S. importer for Porsche and other European marques, knew how to appeal to the entire spectrum of sports car buyers. He suggested to Porsche that it offer a stripped-down 356 model to reduce price and weight.

Porsche’s body maker, Reutter, followed through, building a version of the Cabriolet minus most of its accoutrements. A simple canvas top and side curtains replaced the padded convertible top and roll-up windows. The Speedster’s unique windshield was 3-1/2 inches lower than the 356 Cabriolet’s windshield and gave the Speedster a racier look.

Inside, the Speedster was the picture of sports car purpose, with simplified, non-reclining bucket seats and simple door panels. The instrument panel had speedometer, tachometer and temperature gauge. The tach and heater were officially optional to achieve the $2,995 base price. However, those were basically “mandatory options”. (Porsche would later adopt the practice of charging more for special stripped-down models.)

Choosing the 70-horsepower Super version of the 1.5-liter air-cooled flat four engine over the standard 60-hp Normal added a whopping $500, but that still kept the Speedster’s price around that of a standard Cabriolet. (SAE horsepower ratings used in the U.S. were higher, but actual power output was the same as European DIN.)

The Speedster was a significant 200 or so pounds less than a 356 coupe, and so the optional Super engine made it speedy indeed, able to match the Triumph TR2 in 0-60 acceleration of about 10 seconds.

It was just what Porsche dealers needed. Porsche sold 200 Speedsters in 1954, and production zoomed upward from there, with a total of about 4,500 made in total through 1958.

The lighter, quicker, cheaper combination was the magic formula for an affordable entry point into SCCA racing, where the Porsche Speedster made its mark. Bengt Sonderstrom won the 1955 F-Production championship in a Speedster.

Even in stripped-down form, the Porsche Speedster still had an easier and better top than most British roadsters, though its lowered profile crimped headroom.

The Speedster followed the other 356 models in their evolution to the 356A model spec in 1956 with 1.6-liter engines and other upgrades. Speedster production peaked at 1,171 cars in 1957, and the model was dropped after 1958, its mission accomplished.

The 1957 356 Speedster offered by Gooding & Co. received a comprehensive restoration overseen by marque specialist Thomas Drummond. The car was redone in its original Signal Red over black color scheme.

The 1958 Ruby Red over tan Speedster offered by Bonhams is said to have undergone a 54-month concours restoration by 356 expert Roy Smalley of Eurowerks in Texas, at a cost of hundreds of thousands of dollars. Each of these red Speedsters includes a Porsche Certificate of Authenticity and copies of the original factory Kardex (build sheet).