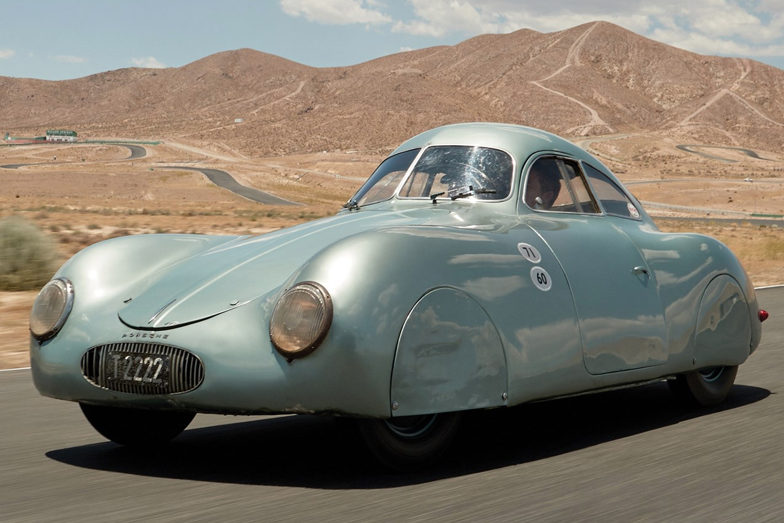 The Battle of Monterey

While high-end auctions populate many centers in North America and Europe, the celebrated Monterey Car Week stands as the true focal point for collectors. Plus, for the many business serving the collector-car market. Yearly, each of the top auction companies battle for market share and “top sale” honors. Therefore, it’s no surprise that extremely rare marquee offerings appear for auction at Monterey. Following 2018’s electrifying $22 million sale of the ex-Gary Cooper 1935 Duesenberg SSJ by Gooding and Company at Pebble Beach, RM Sotheby’s will counter this year with its lead consignment, the last surviving 1939 Porsche Type 64 streamliner in existence, Car Number 3. A car so directly linked to Porsche’s postwar sports-car and racing dynasty that no pre-sale price estimate has yet been publicly posted for it.

The Oldest Surviving Car With The ‘Porsche’ Name

Almost otherworldly in appearance and visually suggestive of the postwar 356, Porsche’s first production road model, the Type 64 was certainly the shape of great things to come from the fertile mind of famed engineer, Ferdinand Porsche and his staff. Commissioned by the German government in 1939, the sleek Type 64 was intended to compete in a 1,500-kilometer (832-mile) Berlin-to-Rome speed contest to demonstrate Germany’s engineering prowess and help promote its newly-constructed, world-leading Autobahn system. The event would also garner international press for the launch of Ferdinand Porsche-designed KdF-Wagen, the German “People’s Car” that would achieve lasting success following  WW II as the Volkswagen.

The Type 64s were constructed during 1939-1940 at the Reutter works. Subseqneutnely, it was across the street from Porsche’s Zuffenhausen facilities. Zuffenhausen was utilizing the basic underpinnings and a tuned, 32-horsepower version of the basic Volkswagen air-cooled, four-cylinder engine. Therefore, Porsche’s new speed machine could not have been further removed from its Volkswagen-based roots. Likewise, used construction techniques similar to the latest contemporary aircraft. The Type 64’s wind-cheating riveted body was formed of lightweight aluminum-alloy panels. In addition, it was designed for maximum efficiency an extremely low ride height and profile. This includes a sloped nose, flush-mounted glass all around and removable covers for the wheel housings.

The Race That Never Happened

Only a few weeks before the Berlin-to-Rome race, the first of the three Type 64s was completed. Meanwhile, war broke out in Europe with Germany’s invasion of Poland on September 1, 1939. Almost overnight, the shift in priorities to military production meant the first Type 64 became of the property of the German Labor Front. Undaunted, Ferry Porsche, Ferdinand’s son, moved ahead with construction of two additional Type 64s. The second was completed in December 1939 and this car.

This Type 64 is the third of the three-car batch. Completed by June 1940, it was built around the chassis of the first car. Unfortunately, it had been damaged with the managing director of Volkswagen at the wheel. For instance, intended as experimental testbeds for the Porsche father-and-son team’s vision for a winning sports car, the Type 64 is regarded by marque experts as the direct ancestor to Porsche’s cornerstone Type 356, which would first emerge in 356/1 roadster form – with Type 64 No. 3 alongside it – from Porsche’s Gmünd, Austria workshops in 1948.

As Allied bombing intensified, Porsche was forced in 1944 to relocate its operations. This was at the direction of the German authorities, with the family’s estate at Zell-Am-Zee, Austria serving as the company’s new headquarters. There, Type 64 No. 3 was kept, alongside Car No. 2. Car No. 3 was the only one of the pair to survive the war intact. Interestingly, Ferry Porsche had the “PORSCHE” letters applied to the front of the car when he registered it in Austria in the company name during 1946. Restoration of Car No. 3 was completed in 1947. A young man from the Farina coachbuilding family – Battista “Pinin” Farina – commissioned to perform the job.

In 1949, Type 64 No. 3 was purchased from Porsche by privateer Austrian racer Otto Mathé. He raced the car to great effect during the 1950s, making him the very first to drive a Porsche in competition. Herr Mathé obviously treasured the Type 64, retaining it until his eventual passing in 1995. Further, in 1997, the Type 64 was acquired by third owner Dr. Thomas Gruber of Vienna, the noted Porsche expert and author, who exhibited the historic Porsche at select vintage events including Goodwood and the Austrian Ennstal Classic.

So, what will it sell for at Monterey? That is a difficult question, even for the most vocal prognosticators and odds makers. RM Sotheby’s has not applied a pre-sale estimate range. In this specific case, it makes sense to let at least two committed bidders determine the monetary value of this wonderful piece of cultural, as well as automotive, history.

Simply, Porsche Type 64 No. 3 ticks every box for purchase by today’s wealthiest and most demanding collectors worldwide. It is the sole survivor of its three-car batch, and carries impeccable provenance with three owners from new. This includes the Porsche family. Further, it was recognized by them as the ancestor to the successful 356 series at introduction in 1948. Until the gavel falls at Monterey in August, its value is inestimable, and its singular status will render its upcoming sale result an outlier in a market where the word “rare” has almost lost meaning.