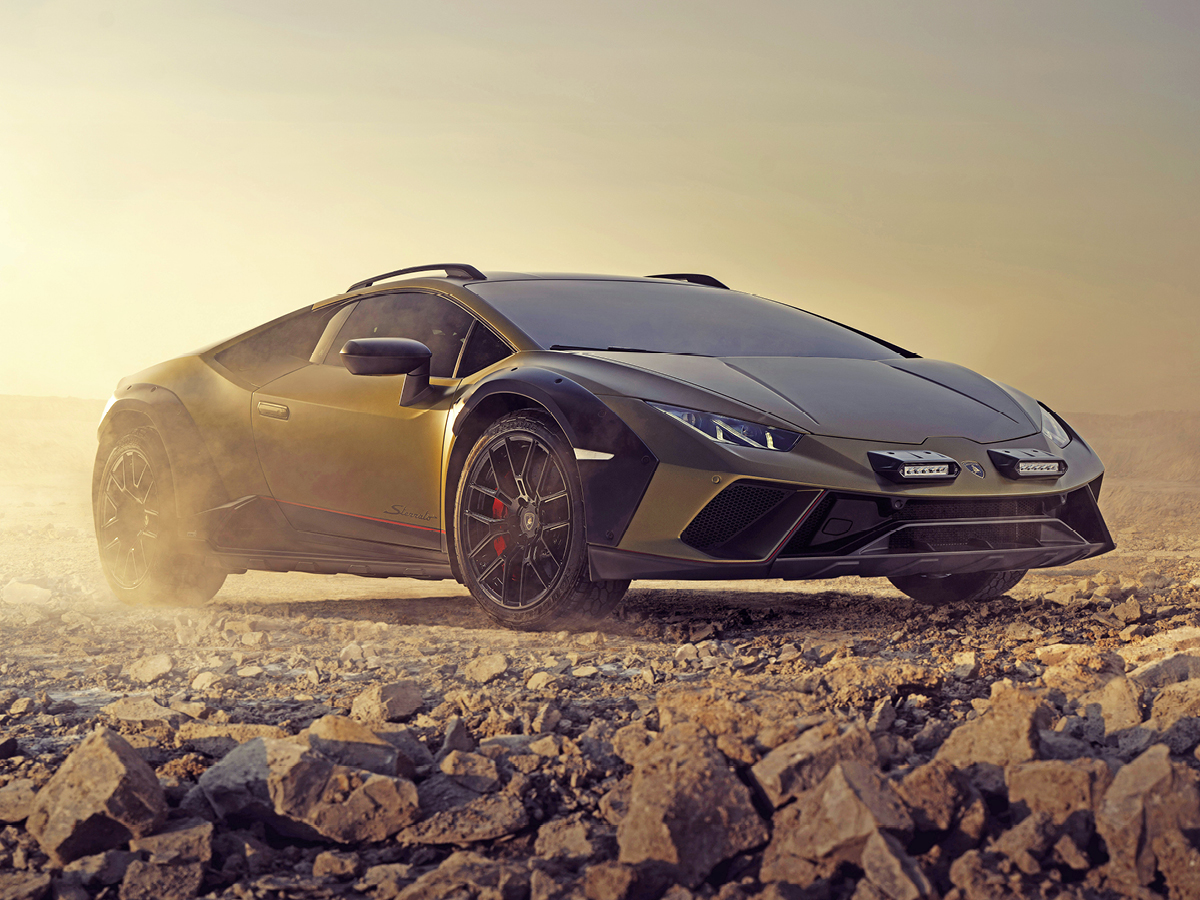 Latest Lamborghini Gets in a Rally Mood

It doesn’t seem like all that long ago (a month) that car enthusiasts were all abuzz over the Porsche 911 Dakar. (They still are.) The Dakar is an all-wheel drive 911 Carrera hiked-up on its suspension and featuring other mods to make it suitable to play in the dirt, sand, or snow.

Now, along comes Lamborghini with the Huracán Sterrato, applying a similar treatment to its mid-engine V-10 supercar. This is simply a case of two automakers arriving at the same idea around the same time. Both cars had been teased for years by their respective manufacturers, which, coincidentally, live under the Volkswagen Group umbrella.

That’s not to suggest both brands shared the same motivation to build sports cars that could play in the dirt. Lamborghini previewed the Sterrato – the name is Italian for dirt road – as a functional concept car four years ago. The Porsche 911 Dakar’s connection to off-pavement 911s, meanwhile, stretches back more than five decades to the iconic sports car’s rally championship years.

Lamborghini CEO Stephan Winkelmann confirmed that the Sterrato will be the carmaker’s last model powered solely by an ICE engine. He also confirmed plans to build 1,499 Sterratos before sunsetting the Huracán.

Both Porsche and Lamborghini offer SUVs, so why build a sports car for off-pavement fun? Good question. Even though Lamborghini had once offered the off-road LM002,

Lamborghini’s chief technical officer, Rouven Mohr, told Motor Trend that when developing the current Urus SUV, the design team learned that most customers were not inclined to want to drive them in the dirt.

The transformation from Huracán Evo into a Sterrato touches all aspects of the car, and all the differences are functional. Lamborghini used different springs, shocks and higher-profile tires to raise the car 1.7 inches, also extending suspension travel to handle undulating surfaces more easily.

That puts the Sterrato’s road clearance at just under seven inches. Lamborghini expressly designed the Sterrato to venture onto loose-traction surfaces, not rutted or rocky trails. The Sterrato rolls on 19-inch wheels vs. the Huracán Evo’s 20-inch rims and fits Bridgestone Dueler All Terrain run-flat tires (235/40R19 in front and 285/40R19 in back).

The fender flares that give the Sterrato a rally car stance were needed to cover the tires, since the rally Lambo has a 1.1-inch wider front track and 1.3-inch wider rear track. Underneath, Lamborghini installs aluminum skid plates to protect the suspension and other sensitive parts.

The Huracán Sterrato uses the same 5.2-liter naturally aspirated V-10 engine as the Huracán Evo, but it’s down slightly in output (601 horsepower vs. 631 in the Evo), and there’s a good reason. To help keep dust and dirt out of the engine’s breathing tract, Lamborghini blocked off the Huracán’s low side intakes and substituted a single rooftop air scoop. It looks cool and rally-like but reduces airflow somewhat.

Torque output remains the same as the Huracán Evo at 413 lb.-ft. You probably won’t miss the 30 horses, as Lamborghini says the Sterrato can still do 0-60 in about 3.2 seconds and pretty much squish your eyeballs back in their sockets. The all-terrain tires, which Lamborghini says are well suited to street and even track use, require a 160-mph speed limiter. Prepare your ego for a 40-mph chop from the Huracán Evo’s top end.

The V-10 is teamed to the same seven-speed dual-clutch automatic transmission as in the Evo. The all-wheel drive hardware is the same, too, though Lamborghini recalibrated the system to handle low-grip surfaces. It can send more torque to the front wheels depending on how much throttle the driver is giving it, along with steering angle and whether the car is sliding.

Lamborghini deleted the Huracán Evo’s rear wheel steering function and recalibrated the Dynamic Vehicle Integration system that controls the AWD, traction control and stability control. The driver can select from three settings, Strada (street), Sport for performance driving on pavement and Rally is for the dirt. The latter lets the driver more easily put the Sterrato into a drift.

All the Rally Trimmings

If you plan to do some dirt running at night, you’re in luck, as the rally lights mounted at the Sterrato’s nose come standard. Inside, the touchscreen center display adds functions of an inclinometer, steering angle indicator, pitch-and-roll display, compass and exact GPS coordinates.

Lamborghini also installs a telemetry system to monitor and analyze performance with the UNICA app, and Apple Watch users can synchronize their heart rate with the system. That could be useful to see what your heart does through drifts, for example.

There’s even a built-in camera to record your adventures.

We would be remiss if we left out one more fun tidbit. A promotional video that Lamborghini produced for the Sterrato had internet users scratching their heads trying to understand its meaning. It’s like Fellini meets Mad Max meets a weird TV commercial for cologne. “This one’s for you, concrete yearner.”

Production of the Lamborghini Huracán Sterrato begins in February 2023. Pricing for the U.S. has not been announced.