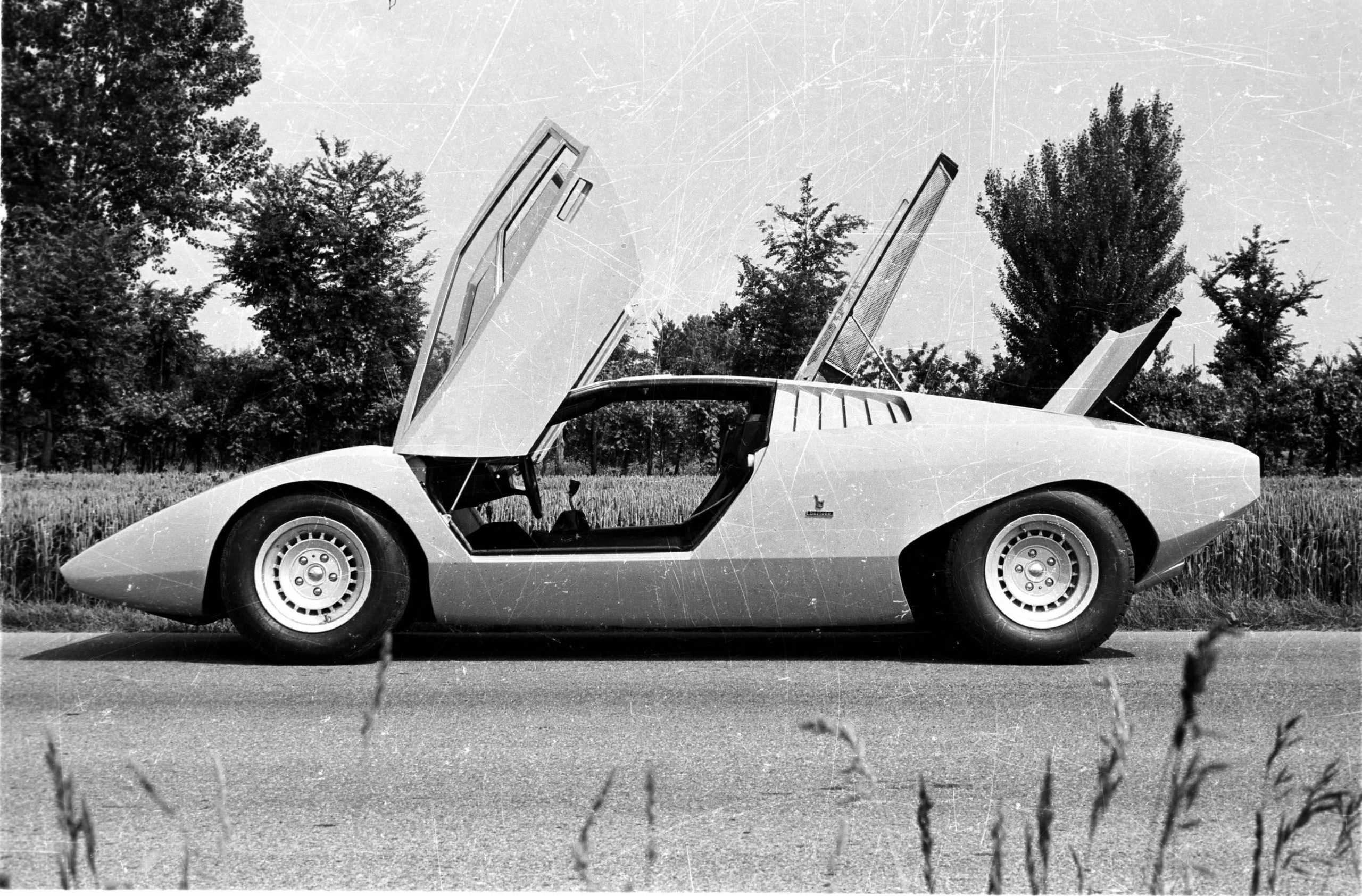 The Lamborghini Countach and Miura once shared the same auto show.

The Lamborghini Miura introduction at the 1966 Geneva Motor Show was indeed a tough act to follow, let alone surpass, but Lamborghini did just that five years later. At the ‘71 Geneva show, the marque unveiled both the higher-performance Miura SV and its eventual successor, the Countach. Both had been designed by Bertone Design Director Marcello Gandini

Like the Miura five years earlier, the Countach blew minds … and generated deposits.

With both apex models present, the ’71 Geneva show stands as an important marker in Lamborghini’s timeline, and the automaker took some time earlier this year to mark the occasion. This golden anniversary reveals much about how supercars and supercar marketing have evolved since then. Plus, it’s just a lot of fun to look at them.

One might legitimately wonder the response over at Ferrari headquarters; whether it involved deadly silence, or perhaps just the boss shouting at his minions, after Lamborghini’s 1971 Geneva reveal. The marque was preparing to unveil its 12-cylinder mid-engine 365 GT/4 Berlinetta Boxer at the Turin Auto Show the following November. This was to be Maranello’s response to the older Miura, but then, Boom! There’s Lamborghini in Ferrari’s face with the doorstop-shaped Countach – seven months ahead of Turin. The Ferrari BB would reach production in 1973, the Lamborghini Countach in 1974.

The Countach brought a heavy dose of future shock. Gandini had been refining his extreme wedge theme since Bertone had unveiled its 1970 Lancia Stratos Zero concept. Standing just 33 inches high, the Zero was impossibly impractical and not meant for production, but rather to stir the imagination. It also helped Bertone snag the design contract for the production Stratos, a kind of cousin to Ferrari’s Dino 246 GT.

The Countach didn’t quite match the futuristic audacity of the Pininfarina Ferrari 512 Modulo also shown in 1970. But then, the Modulo looked more like a prop for a sci-fi movie than a supercar, and had no influence on future Ferraris – or any other car. The Countach was destined for production, though not without some changes.

The Countach’s boldest single feature had to be the “scissor” doors, which managed to outdo gullwing doors for visual pop. The doors would make it into production. The “500” in the name, which signified a prototype 5-liter V12 engine, would change to “400” with the adaptation of the marque’s existing 4-liter unit.

Most critically, the engine in the production Countach would be mounted lengthwise, rather than transverse, as it had been in the Miura. This required lengthening the rear of the production car, but Gandini did this masterfully.

The prototype’s platform-type chassis was replaced with a tube-type frame for production. Outside, the air intakes were altered, while inside, the electronic instrument panel was replaced with conventional gauges. The actual LP500 prototype was used as a testbed before ending its existence in a crash test in 1974.

The name “Countach” is etched into Lamborghini lore. The official version of the story claims that before the prototype was completed, Lamborghini hid it in a storage shed on a farm near Grugliasco due to labor unrest at the factory. When the farmer first saw the car, he reportedly exclaimed, “Countach!” The word, in Italy’s Piedmontese dialect, essentially expresses shock and awe. When the Piedmont-born Gandini heard the story, he was said to have lobbied Nuccio Bertone and Ferruccio Lamborghini to name the car Countach. It became the first Lamborghini not to be named for something related to bullfighting.

Like many bold designs, the Countach could be polarizing. Seeing the LP500 at the same show as the Miura SV put that aspect in the spotlight. The Miura was a stunning yet classical beauty that, like the Jaguar E-Type, managed to embody both feminine and masculine personas.

The Countach was hard-edged and really more brutal than beautiful. Yet, this is the look that would become poster-worthy in the 1980s for many car-obsessed teens. By the middle of that decade, Ferrari had replaced the elegantly brawny Berlinetta Boxer with the outlandishly brutish, nothing-elegant-about-it Testarossa to take on the Lambo.

The Countach remained in production for 16 years, and the more wings, louvers, scoops and other appendages it grew, the more popular it became. Such was the aesthetic of 1980s supercars, as exemplified by the Countach 25th Anniversary model.

As for Lamborghini’s “other” 50th anniversary car, the Miura SV was the final iteration of that remarkable supercar, adding numerous chassis and powertrain upgrades and, naturally, higher performance. Fender flares covered wider wheels, suspension was tweaked and, critically, the engine and transmission no longer shared the same lubrication system, which could be a weak point on earlier models.

The SV deleted the distinctive “eyelashes” around the Miura’s headlights, though Ferruccio Lamborghini requested them for his personal SV. Perhaps it was a parting gift before he sold the company in 1974.

Lamborghini built 150 Miura SVs before also retiring this landmark model and putting its successor, the Lamborghini Countach, into production. Half a century later, Lamborghini’s Countach and Miura will still knock your socks off, whether at a concours, on the auction block or, best of all, on the road.