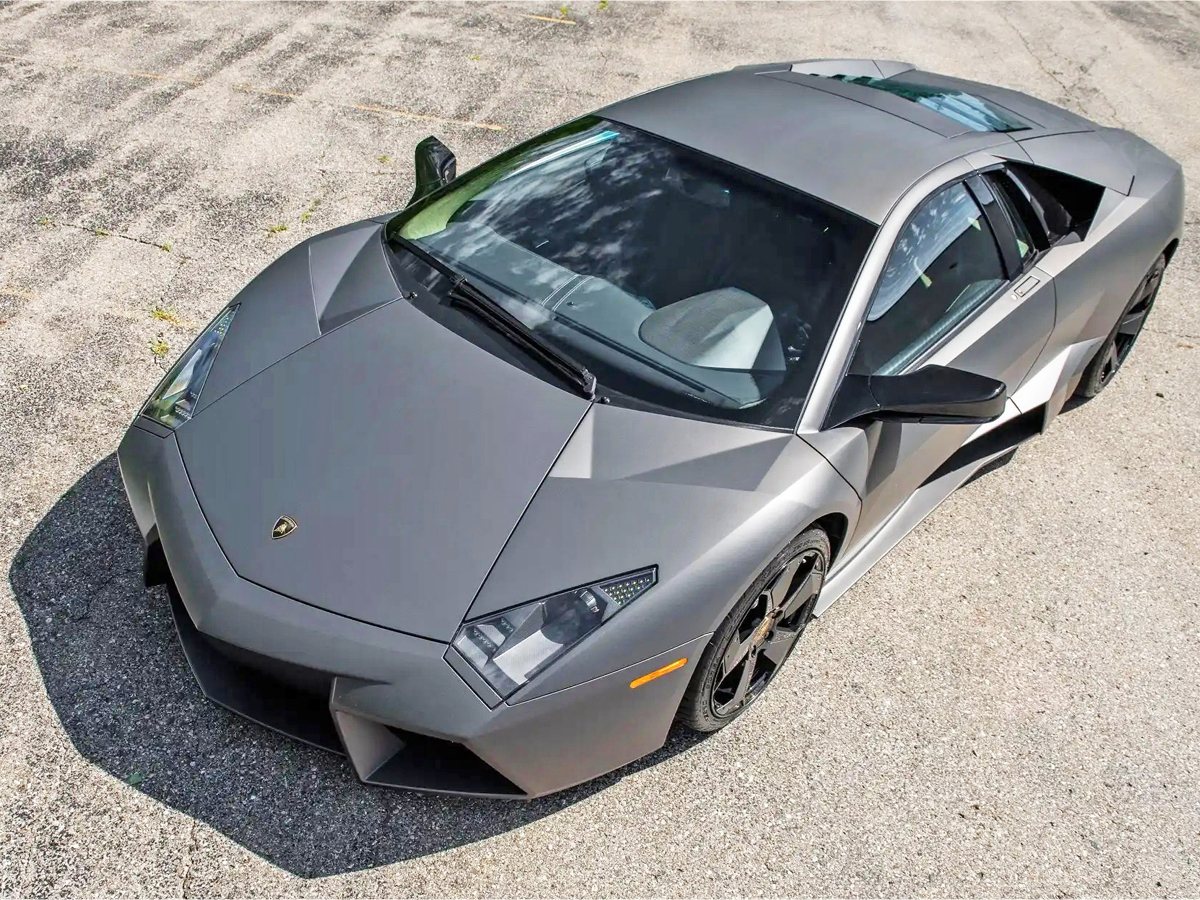 The Lamborghini as Sculpture

Those finding themselves in the enviable position of being invited by Lamborghini or Ferrari to acquire the latest rarest-of-rare elite models know the drill. The car presented to them will represent the very best the marque can proffer at the time, with exclusive design and features. But its time in that position will be limited. The next elite car will be even better. They know that. They’re likely already on the list for that one, too.

That is how it likely went with the Lamborghini Reventón, of which just 21 coupes were ever built between 2007 and 2009. (A Roadster was introduced in 2009, and 15 were built.) One of those coupes, number 0/20, went straight into the Lamborghini museum. Of the 20 built for customers, half came to the U.S., priced around $1.5M. One of those, #12, will be offered for sale at the RM Sotheby’s Monterey auction in August.

As a side note, RM Sotheby’s sold  Reventón #7 for $1.375M at its 2015 Monterey auction and has  Reventón #13 consigned for its Munich sale in November. Get ready to raise your bidder paddles.

A Concept Car for 20 Buyers

At first glance, the Lamborghini Reventón looks quite a bit like the Aventador, which did not arrive until 2011 to replace the Murcielago. This was, of course, on purpose and basically the whole idea behind this special model.

The Reventón was in essentially a rebodied Murcielago LP640 and was mechanically identical to it, with the 6.5-liter V-12 slightly tweaked for an additional 10 horsepower (to 641 hp), just for good measure. You could think of the Reventón as the concept car that previewed the Aventador design, with the added bonus of 20 copies made for customers.

That’s about as close as a modern carmaker can get to offering a bespoke “coachbuilt” model today, while remaining within prescribed safety certifications. The more recent $2.6M Countach revival, based on the Aventador, is Lamborghini’s latest manifestation of this trend.

By the time Lamborghini introduced its first car, the 350 GT, in 1964, the practice of coachbuilders offering alternate body designs for buyers was beginning to sunset. Ferrari continued to offer very short runs of elite models, like the 1964-1966 500 Superfast. Yet, all Lamborghinis of this period were built in very low numbers – just 120 for the 350 GT, for example, and then another 250 or so with the 3.9-liter V-12 and badged 400 GT.

Somewhat surprisingly, the practice was revived in the 2000s by high-end makers, which found there were enough customers willing to pay the enormous premiums over mechanically similar “regular” models. The Lamborghini Murcielago LP640 coupe, for example, started at just over $350,000 in its last years. The premium for the carbon-fiber Reventón based on it was just around five times that figure.

The Reventón was also an opportunity for Lamborghini’s then head of design, Luc Donckerwolke, to further push boundaries in the marque’s evolving design language. In this case, the company made no secret that the key inspiration for the Reventón’s look was the U.S. Air Force’s F-22A Raptor fighter jet, which used angular design as a radar-evading measure.

As fiberglass did for budding sports car makers on both sides of the Atlantic in the Fifties, the use of carbon fiber made a new ultra-short-run body possible for the Reventón. Lamborghini made the bold choice to paint every Reventón in the same unusual opaque gray, called Grigio Reventón. This seemingly flew in the face of high-end customization, yet at the same time also bolstered the rare car’s mystique.

The paint used was a special blend of metallic particles that gave the very-angular carbon-fiber body the look of flat steel or even granite. The finish had a purpose, as “Top Gear” observed: “The car’s lines are so intricately surfaced they resemble delicate origami, and without an opaque finish, the thing would look like it were made of Lego.”

The Reventón body is fully devoid of obvious aero add-ons and ostentatious air intakes, a stark contrast, for example, to Lamborghini’s own wing-festooned Countach 25th Anniversary model. Be assured, though, that the wind tunnel tricks have been baked into the Reventón design so well that they do not distract from the sheer visual impact of the car as a whole. And, speaking of the Countach, the Reventón’s rear end paid homage to that earlier supercar.

Reventón’s cabin, draped in military-green Alcantara and accented with black leather, aluminum, and carbon fiber, looks almost Aston Martin-ish in its elegance. The instrument panel also follows the fighter-jet theme, though not obnoxiously. Its unique LCD displays focus on engine RPM and g-force, though you can of course display speed.

In its track test of Reventón 0/20, “Top Gear” concluded that, “The car grips tenaciously, corners with a fluid swagger and boots out of the exit with the sort of whooping drama every Lambo owner will always demand.”

It also concluded that the Reventón was built more as a sculpture or trophy for the dyed-in-the-carbon-fiber Lambo aficionado. Is there room in your trophy garage for one?