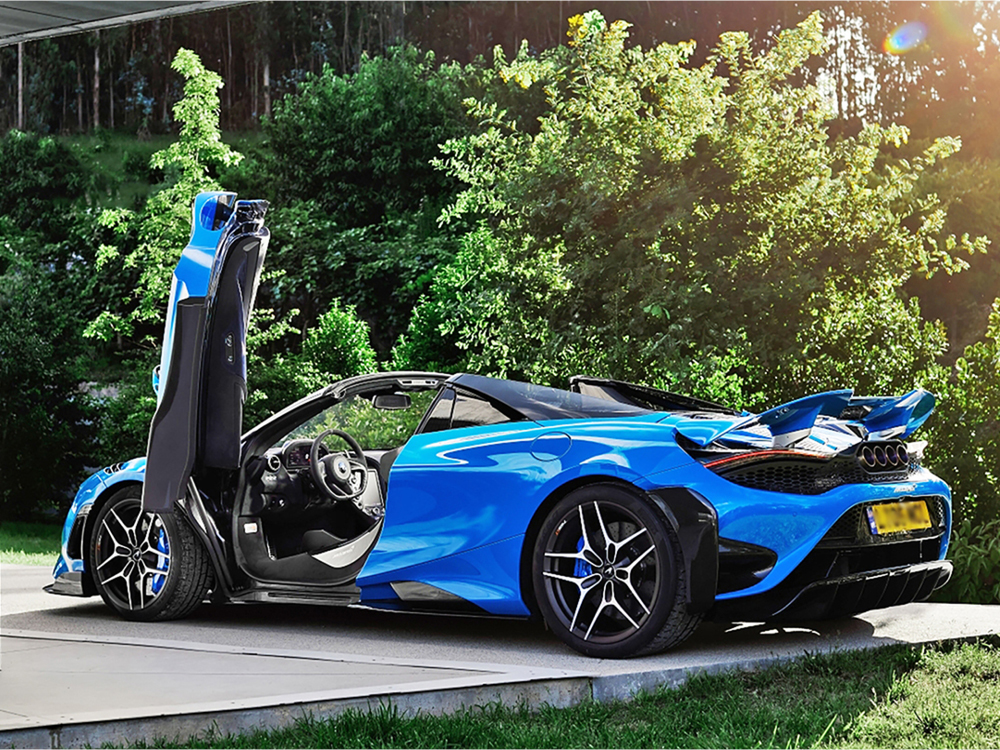 Back in the summer of 2020, we concluded our preview of the McLaren 765LT with the suggestion that, “You’d better move quickly to get a McLaren 765LT, and while you’re at it, put your name on the list for the inevitable Spider version.”

If you got distracted and somehow forgot to heed that advice, just know the 765LT Spider is here now. Putting 755-horsepower into a 3,060-pound convertible could make you face your fears of arachnids.

There are some convertibles you buy for the pleasure that comes from mellow, relaxed top-down cruising, maybe for a nice sunset drive. The McLaren 765LT Spider is not one of those. This Spider is for the driver who gets a kick riding a 228-horsepower Kawasaki Ninja H2 superbike but might like a bit more wind protection, and a bit less screaming from the frightened passenger.

To recap, as with other McLaren models, the car’s badge reveals its engine output, though expressed as “PS,” or metric horsepower. Translated to ‘Murrican’ horsepower, the magic number is 755. The “LT” badge designates the marque’s track-focused models. The initials fill in for “Long Tail,” which is more of an homage to previous racing McLarens than to the car’s actual proportions.

The 765LT is based on the 720S, but with the track performance and persona turned up to full-boil. The altered design does add length, but you’d hardly notice the added 0.4-inch longer tail and a nose that stretches just 1.9 inches further.

McLaren could have used the “LW” badge for lightweight, because the LT models show obsessive attention to reducing mass. The carmaker was already renowned for keeping its carbon-fiber body cars feather-light, relatively speaking, but the LT provides a lesson in trimming the fat where there was no fat.

As one might suspect with a car that adds a power-operated retractable hardtop, the McLaren 765LT Spider is somewhat heavier than its coupe sibling – 108 pounds, to be precise. But it is 176 pounds lighter than the 720S Spider on which it is based, so comparisons should start there.

That weight drop is attributed to using lighter air springs in the suspension, thinner glass for the side and rear windows, a titanium exhaust system, and lighter seats and wheels. Oh, and McLaren left out the stereo and air conditioning. We suspect that many 765LT buyers will take advantage of the no-cost option to add those two features and the hard-to-believe 25 pounds McLaren claims they weigh.

With an insane 4-lb/hp weight-to-power ratio, the McLaren 765LT Spider is insanely quick, but before we get to that, let’s look at the key differentiator from the 765LT coupe: the roof. At the touch of a button, the Spider’s top retracts in just 11 seconds, and one can do so while driving at speeds up to 31 mph.

If you’ve just gotten your hair coiffed or prefer more UV protection with the added ventilation, you can leave the Spider’s top up and just lower all the windows, including the rear window. For more wind-in-the face feeling without riding a motorcycle, try to get your hands on a McLaren Elva, which eliminates the windshield altogether.

Naturally, the extra $67,500 you spend over a McLaren 720S Spider to get the 765LT brings more than lighter parts. The 4.0-liter twin-turbo V-8 yields an extra 44 extra horses thanks to forged aluminum pistons, higher-capacity fuel pump and the aforementioned titanium exhaust system. The latter uses four high-mounted central tailpipes to broadcast a crackling roar to entertain the neighbors every time you start the car, even if they live a block away.

The engine cranks out 590 lb-ft of torque, and, as in the 765LT coupe, the 7-speed dual-clutch transmission employs lower, closer gear ratios than in the 720S to maximize acceleration. McLaren says this venomous Spider will run from 0-60 in just 2.7 seconds, obliterate the quarter-mile in 10 seconds and top out at 205 mph if you have enough track.

Of course, you can always drive the McLaren 765LT Spider on the road. In practice, though, the car’s lower weight and higher power compared to the 720S Spider are likely to be academic except to ardent track drivers. The 720S Spider is probably the better car for road driving enjoyment for most drivers.

But go ahead and put the McLaren 765LT on your wish list anyway.