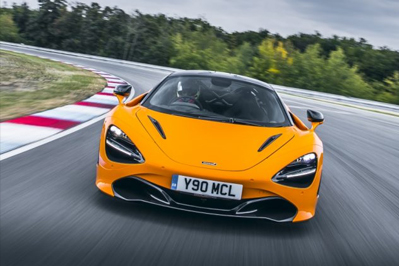 Coupe and Spider, Take Your Pick

It’s likely that when McLaren engineers put the finishing touches on the 720S, the current top model in the marque’s “Super” series, drag racing was not the highest goal on their minds. Yet, McLaren Automotive was understandably pleased to issue a press release when the 720S won Motor Trend magazine’s Eighth Annual World’s Greatest Drag Race.

Running a blistering 10.1-second quarter-mile at 141.5 mph, the McLaren was quickest in a field of 12 cars. They blasted down the runway at Vandenberg Air Force Base, where MT conducted the test. McLaren backed up its supercar royalty standing by also winning the standing half-mile race in the same test.

Of course, you know the McLaren 720S is no one-trick pony. Its superlative all-around road and track performance earned it the World Performance Car 2019 trophy from the World Car Awards jurors. The 720S Coupe starts at $293,000; the newly introduced 720S Spider begins at $315,000.

Top of the Middle

Just to recap, McLaren Automotive today builds 14 road cars in three distinct series. These are Sports, Super and Ultimate, plus four customer racecars. And there are more on the way.

The 720S, introduced in 2017, succeeded the 650S. McLaren makes it easy to see the progression of performance, because it declares engine power right in the model’s badge. The model number is the car’s engine output in “pferdestärke,” German for metric horsepower. For the 720S, that translates to 710 ‘Murrican horsepower.

The McLaren’s unique design language, with nary a nod to heritage design anywhere on its teardrop-shaped body, ensures you will not lose your 720S in a Pebble Beach parking lot full of Ferraris and Lamborghinis. One of the first things you notice about the 720S is what’s missing: there are no big air scoops on the flanks. McLaren instead gave the dihedral (“butterfly”) doors a unique double-skin form that channels air to the radiators.

Like all McLaren cars, the 720S is built around a carbon fiber tub that delivers extreme strength and rigidity in a lightweight structure. The chassis also makes extensive use of aluminum alloys, also used for some body panels.

How strong is it? Just ask journalist Sean Evans. He survived a high-speed crash while riding shotgun in a McLaren 570S on a blast through California’s Los Padres National Forest. The pilot, a 20-something journalist from England, lost control, sending the McLaren airborne at 70 mph. The car rolled over on its 225-foot slide down the mountainside. Evans, who recounted the incident in a “Mens Health” magazine article, walked away with minor scratches.

McLaren Through the Looking Glass

The McLaren’s inner strength translates into an extremely low power-to-weight ratio. Each each of its 710 horsepower carry just 4.4 of the car’s 3,140 pounds. The 720S Spider weighs a reasonable 108 pounds more, not from added bracing, which it does not require, but for the retractable carbon fiber roof.

The 720S Spider’s carbon fiber roof sounds impressive until you see the optional electrochromatic, variable-opacity glass roof. That adds just another eight pounds. Getting into the gorgeous cockpit is easier with the Monocage II structure, which McLaren says allows for low sills and generous opening space from the butterfly-style doors.

Those figures, along with acceleration performance and top speed, mirror the Ferrari 488 Pista. Getting super-nitpicky, the Ferrari claims 0-200 km/h (124 mph) in 7.6 seconds, two-tenths of a second quicker than the McLaren, with a 211-mph top speed vs. the McLaren’s 212 mph (Coupe and Spider). Take that, Ferrari!

The real joy of driving a McLaren 720S, and especially the Spider, would be in bypassing straight-line hijinks at Vandenberg for a drive up the Pacific Coast Highway, stopping in for some laps at Laguna Seca. On the twistiest roads or most challenging racetrack, McLaren’s Proactive Chassis Control II suspension system keeps the body level through corners without the use of conventional anti-roll bars. Another benefit of this system is the latest development on hydropneumatic technology. It that debuted with the McLaren MP4-12C eight years ago. This is a suppler ride than in other cars of its ilk.

“It’s no grand-touring machine, but the 720S is a more comfortable-riding vehicle than any supercar has a right to be,” says Car & Driver.

It’s a safe bet that if you have a McLaren 720S Coupe or Spider, not many other drivers will want to race you for “pinks.” But there’s so much more to these cars than blinding straight-line speed, you’ll surely find ways to enjoy yourself.