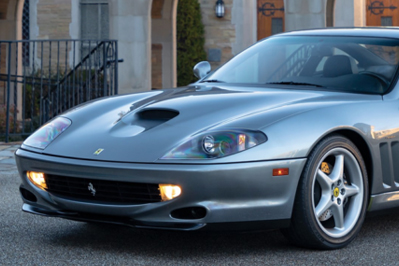 Giving the Purists What They Want

Giving the customers what they want is “business 101”. But what happens when the customer wants something you thought had run its course years before, and that you’d long since been replaced with a more modern product that the customers also seemed to love?

Such were the problems of being Ferrari. In 1973, the marque replaced its 365 GTB/4 Daytona, the last of the classic V12 berlinettas and a bona fide classic from Day One, with the mid-engine Berlinetta Boxer. That model and its successors, including the Testarossa and 512M, gave Ferrari a 20-year run of flat-12 supercars.

Perhaps caught up in a wave of nostalgia that swept through the 1990s, Ferrari’s top clients pined for something more like the Daytona. Ferrari obliged with the 1996 550 Maranello, and the customers were indeed pleased.

RM Sotheby’s Amelia Island auction is offering a 2000 550 Maranello with just 4,200 miles. It has a pre-sale estimate of $140k-$160k, with no reserve. That’s right in between Hagerty’s values for “Excellent” and “Concours” condition and still below the car’s original price.

Looking back at the environment that birthed the 550 Maranello sheds some light on the question of going from a mid-engine supercar back to a front-engine V12. In 1992, Ferrari issued the 456 GT, a front-engine V12 luxury 2+2 that struck a particular chord with a segment of the Ferrari clientele. If it could be a little shorter, a little lighter, a little more powerful…

The Testarossa and its 512M successor struck many as wild and crazy cars. However, they were also not the kind you’d want to drive every day. According to a 1997 Car & Driver report comparing the 550 Maranello to the Daytona, Ferrari’s then-president, Luca di Montezemolo, admitted that a lot of customers were “fed up with a reclining seating position behind a steeply inclined windshield, poor visibility, and a lack of luggage space.”

The 550 Maranello proved that supercar performance and everyday usability did not need to be mutually exclusive. Not only was it faster and better handling than the 512M that it replaced, but also easier and more comfortable to drive, and more practical. It seems the classic Ferrari berlinetta formula was ideal all along.

Credit must be given to Pininfarina for designing a 1996 automobile that did such a credible job of capturing the spirit of the Daytona. The 550 Maranello rode on a 98.4-inch wheelbase, just four inches longer than its progenitor. The new model was also just five inches longer overall than the classic. That was no easy feat, given that the new car had to package modern safety engineering.

Some, including Car & Driver’s editors, thought the design was “derivative,” and not as exciting as the Daytona. But if there was any resemblance to the 1990s Toyota Supra or Chevy Camaro, remember that those cars took design inspiration from earlier Ferraris, too.

Six on the Floor

Under the 550 Maranello’s hood was a proper V12. It is based on the 5.5-liter unit in the 456 GT but pumped up to 485 horsepower. The engine won praise not only for its power, but also its flexibility. It revs to nearly 8,000 rpm, and can pull smoothly in city traffic in sixth gear.

Now, get this, kids: The only transmission available with a 550 Maranello was a 6-speed manual, with the classic Ferrari slotted shifter gate. They really don’t make them like that anymore. The car’s successor, the 575M, offered the F1 automatic manual, and a lot of drivers took it.

A Piece of Ferrari History

Ferrari built 3,083 of its 550 Maranello, so they’re not especially rare. A modern-era, front-engine V12, stick-shift Ferrari is a rare treat, though. Moreover, the one offered by RM Sotheby’s has just 4,200 miles. Don’t you just want to jump in and run up that odometer?