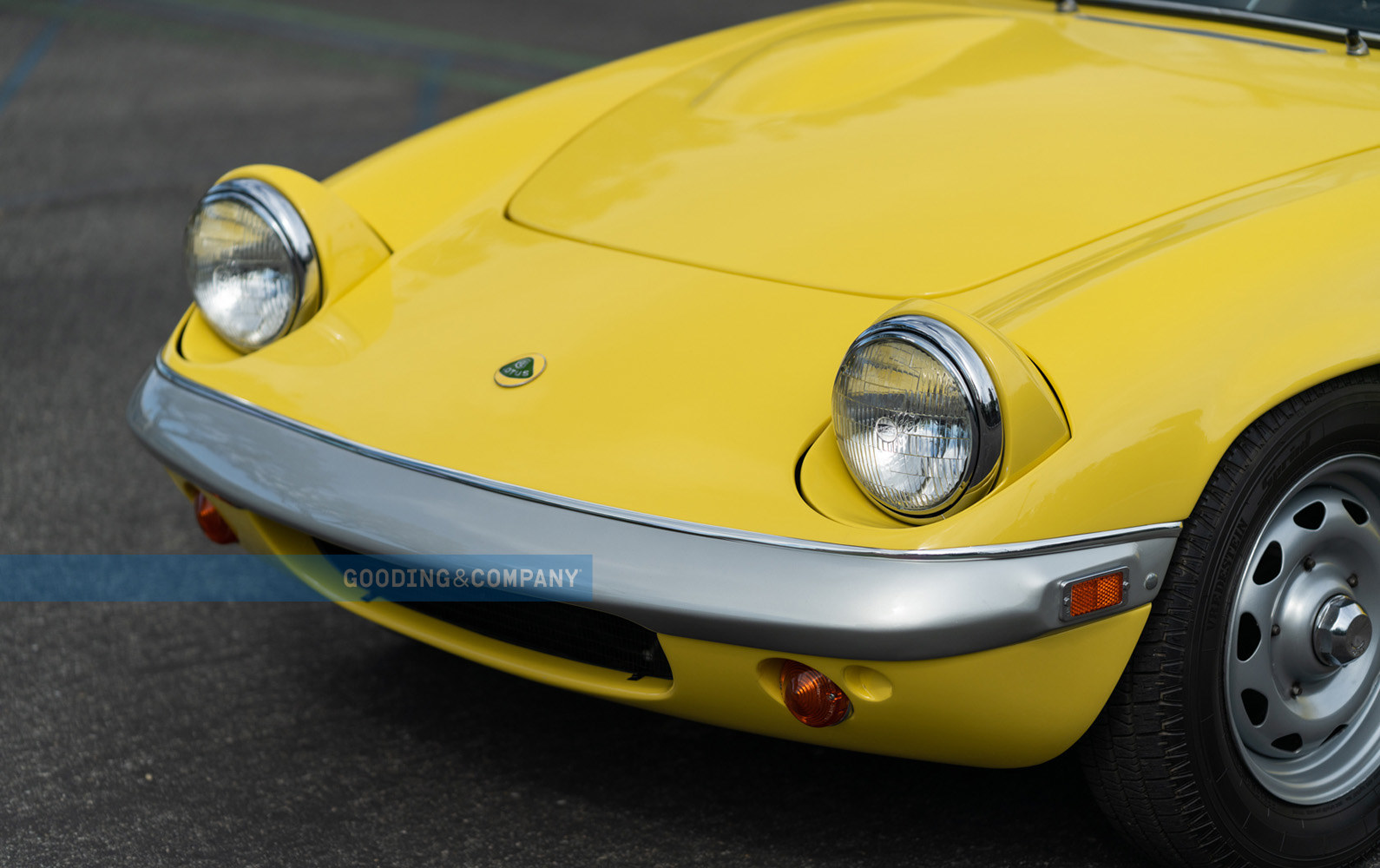 Big legacy from such a small car.

When bench-racing sessions turn to the topic of “best sports car,” there will inevitably be votes for the tiny yet mighty Lotus Elan. Built from 1962-1973, distilled the definition of “pure sports car” to an essence that has rarely been captured since.

And yes, we’re going to mention Mrs. Peel. Could one even discuss the Elan without her?

Start with a gaze at the featured car, a restored two-owner 1969 Lotus Elan SE sold in Gooding & Company’s Geared Online auction in May. The no-reserve sale brought $34,100 against a $55,000-$75,000 pre-sale estimate. The selling price put this Elan squarely between Hagerty’s values for “Excellent” and “Concours” condition.

Here’s a look at why the Elan left an impact so disproportionate to its diminutive size and 12,200-car production run.

Lotus was one of racing’s proverbial giant slayers in the late 1950s and early 1960s. Its tiny, highly aerodynamic sports-racer called the Eleven exemplified Lotus founder Colin Chapman’s “simplify, then add lightness” ethos: 85 horsepower works wonders when it has to propel just 1,000 pounds.

Translating that philosophy to road cars proved somewhat difficult. The 1957-1963 Lotus Elite was a beautiful but flawed machine. While the Elite did well in racing, its fiberglass monocoque (unitized body/chassis) proved expensive the make and repair and made the car uncomfortable on the road.

The next shot hit the mark. Introduced at the 1962 Earls Court Motor Show, the Lotus Elan caused a sensation. Just 145 inches long on an 84-inch wheelbase, the Elan was a waif of a roadster. With a fiberglass body on a separate steel chassis, the Elan weighed 1,500 pounds. That was 400 more than the Elite but still a staggering 600 pounds lighter than the popular Triumph TR3. And here’s the kicker: the Elan also beat the Triumph’s 100 horsepower by five, making it a scorcher on the road.

A Tool for the Skilled

If the word “scorcher” connotes images of the two-ton, 789-horsepower Ferrari 812 Superfast, take a moment to recalibrate your standards. On a twisty road, the Lotus Elan was a stiletto in the hands of an focused driver.

The Elan’s steel backbone chassis looked rather like a two-ended tuning fork. This structure carried the independent suspension and four-wheel disc brakes, two specs that by then had begun trickling down from racecars.

“The car performs as well as you’d hope it would, being the offspring of the same outfit that engineered wins in the World Driver’s and Constructor’s Championships, plus the Indianapolis 500, all in the same year. The handling is superlative. Very forgiving.”

The Elan body design is usually credited to South African-born Ron Hickman, who went to work for Lotus in 1958. Even if you’ve never owned an Elan, you might have Hickman’s most famous piece of work in your garage; the Black & Decker Workmate work bench was his invention in the late ’60s. The Elan was also available in kit form, although most chose factory-built cars.

The Elan’s 1.6-liter four-cylinder engine used a Ford “Kent” cylinder block with a bespoke twin-cam cylinder head designed by Harry Mundy. The manual transmission also came from Ford in the UK. Initially pegged at 105 horsepower, the engine was later tweaked to about 115 hp and then ultimately 126 hp in “big-valve” Sprint form in the early 1970s.

Again, recalibrate your own performance standards to understand that 0-60 in about eight seconds was flying for a small British sports car of that period. The Elan was all about speed through the curves.

Performance tweaks made the Elan quicker as the decade went on; a ’69 SE model like that sold by Gooding & Company might do the deed in about seven seconds. And that was with the added weight of the SE’s “Special Equipment” that upscaled the cabin with thicker carpeting and power windows. The Elan Sprint was down around 6.5 seconds.

Lotus added a “+2” coupe variant of the Elan before transitioning to its new-generation models in the early 1970s, including the second-gen Elite, the Esprit and the Eclat.

In the 1960s, TV do-gooders had signature cars. Batman had the Batmobile, of course. In Britain, and arriving in America in 1967, Roger Moore as “The Saint” famously drove a Volvo P1800 sport coupe. Two years prior, Britain had sent “The Avengers” TV show to America, with John Steed (played by Patrick Macnee) driving a 1926 Bentley and his judo-tastic partner, Emma Peel (played by Diana Rigg) piloting an Elan. Mrs. Peel, as Steed always called the apparent widow, started with a white ’64 and switched to a blue ’66.

“The Avengers” aired on ABC in prime time, and it is quite likely that the show was the only place most Americans ever saw an Elan, but the pairing of on-screen character to car was as iconic as any other.

An attempted reboot of the Elan in 1990 as a $40,000 front-drive sports car did not go as well as Lotus had hoped. The newfangled Elan M100’s timing could not have been worse. Introduced at the same time, Mazda’s Miata embodied the style and spirit of the original Elan and started at just $14,000. The Miata has long since become the world’s best-selling sports car ever.

In 1996, Lotus, then under the ownership of Romano Artioli, who had also resurrected the Bugatti marque, introduced the feather-light, mid-engine Elise. This made the purists very, very happy. The Elise became the marque’s longest-running model, with production slated to end this year.

Mrs. Peel would have liked it.