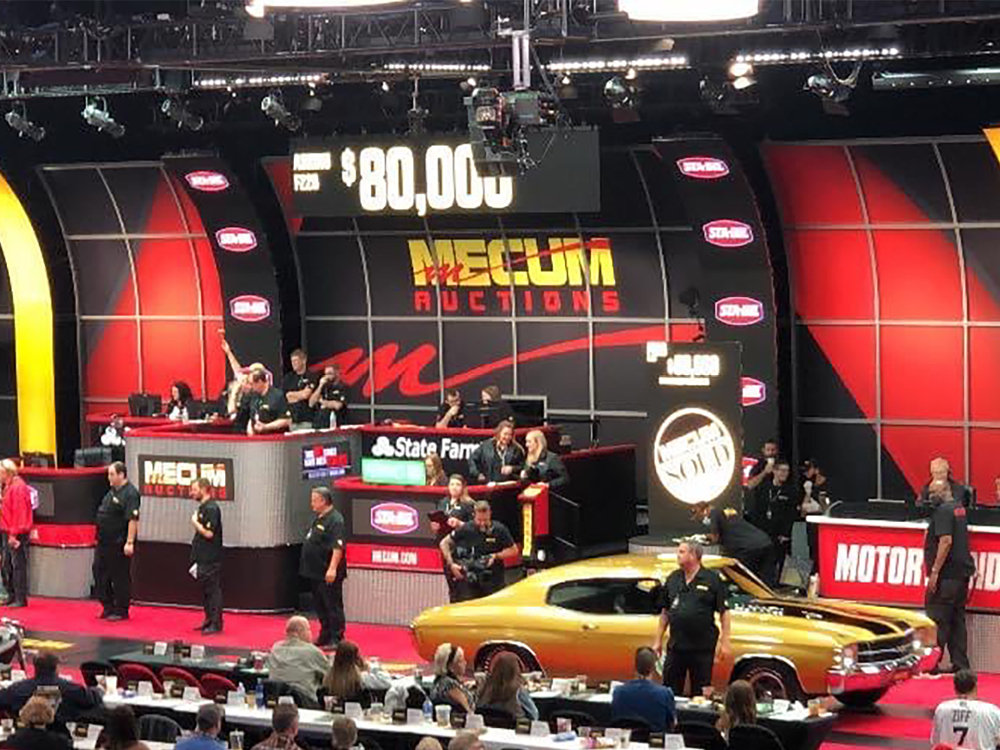 Mecum Auctions bills its Kissimmee, Florida sale as the world’s largest collector car auction, and it lived up to that claim for 2022. Fresh off its record-breaking 2021 auction year with $578M in sales, Mecum’s season-opener for 2022 rang up an astounding $217 million in sales.

That makes Mecum the first single auto auction to pass the $200M mark. (In the art world, of course, that can sometimes be one painting!). Mecum blew away its own previous single-auction record of $176M. Chalk it up to having 3,500 cars sold over 11 days and achieving 90-percent sell-through. The 2,954 vehicles sold notched the record for most cars ever sold at a single live auction.

The Kissimmee sale exemplified Mecum’s business model, which offers something for everyone in the car hobby, from the family cars you remember as a kid to the supercars you dreamed of as a kid and collect today.

The #1 car was an American legend, the first-built 1965 Shelby GT350R, which is one of the most significant cars in the Shelby stable. Its $3.75M price (with fees) edged out Mecum’s own sale of the 1968 “Bullitt” Mustang by $100K at Kissimmee in 2020 and now stands as the most expensive Mustang ever sold at public auction.

This Shelby GT350R, was the first of these factory racers built and became a Shelby factory team car and engineering test bed. Driven extensively by Ken Miles, Bob Bondurant, Chuck Cantwell, Peter Brock and Jerry Titus, this special Mustang took more than 10 First Place finishes in B-Production during the 1965 SCCA season. More recently, the car was in the collection of a Premier Financial Services client.

Three of the world’s most sought-after supercars filled in the next spots, followed by another American icon and arguably the world’s most famous custom, the 1951 “Hirohata” Mercury. Built in 1952 by George and Sam Barris for customer Robert “Bob” Hirohata, the unique Merc sold for nearly double its estimate. The car’s fascinating history includes being sold from a used car lot in 1959 for $1,000 and much later restored and displayed at Pebble Beach Concours d’Elegance and also showcased (literally) on the National Mall by the Historical Vehicle Association.

Speaking of barely driven supercars, in addition to the McLaren Speedtail in the #2 spot on the top-10, collector Michael Fux sold five other cars. Highlights included a Ferrari SF90 Stradale with 57 miles for $935K and a 2021 Ferrari F8 Spider with 66 miles for, appropriately enough, $660K. That works out to an even $100K per mile.

The Porsche 911 Turbo that sold for $1.43M was featured in the 1995 Film “Bad Boys” starring Will Smith and Martin Lawrence. The movie’s director, Michael Bay, bought the car and later sold it to Pat Sandstone, a film producer, who kept it until 2005. It was refreshing to see that its several owners enjoyed the car, which showed 34,396 miles.

The Mark of Mecum

It wouldn’t be a Mecum auction without Corvettes, and Kissimmee had 406 total, enough for their own auction. One nearly knocked the Hirohata Merc down a peg. As of January 19, a 1963 Corvette racer known as “Gulf One” had been bid to $2.4M and was tagged “the bid goes on.” Mecum spokesman David Morton confirmed for Premier that “The “Bid Goes On” program provides the consignor with the opportunity to continue to have a vehicle listed on mecum.com for a defined post-auction period.

The car was one of numerous Vettes from the John Justo Collection, which also included a 1960 racer known as the “Race Rat” that won its class and took 16th overall at the 12 Hours of Sebring in 1960.

The many private collections offered at Mecum’s Kissimmee sale reflected the diverse nature of Mecum auctions in general. Case in point: The Pagani Huayra, one of 100 built, came from the Jackie and Gary Runyon Collection, as did the restored 1936 White tour bus, which ferried visitors through Glacier National Park back in the day. The couple not only collect modern supercars, but also 1960s drag cars, with several built by Tommy “TV” Ivo also selling at this auction. Speaking of television, also selling from this collection was the Barris-built coffin-body “Dragula” dragster featured in “The Munsters” in the 1960s, bringing $473K.

So, yes, in addition to its size and scope, Mecum’s Kissimmee auction offers entertainment value that’s worth the trip alone. See you next year.