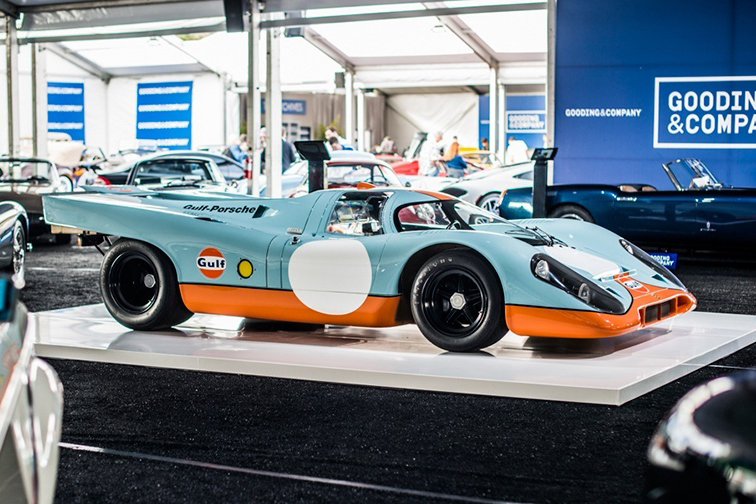 Necessity is the Mother of (Re)invention

Most collector-car auction houses had already been offering several convenient absentee bidding options and live streaming auction coverage as part of their regular operations. However, the public safety and travel restrictions posed by Covid-19 spurred the industry to apply creative solutions to the problem. Although Barrett-Jackson is best-known as the master of huge live auctions with large crowds of bidders and spectators in attendance, it too launched its first online auctions in the wake of the recent pandemic. It now has had two such events now under the company’s belt and the latest completed July 6-10. Nonetheless, enhanced safety measures, expedited entry procedures, and advance planning are expected to allow Barrett-Jackson to hold its next live auction October 15-17 in Las Vegas.

For its part, Milwaukee-based Mecum Auctions, also renowned for its massive auctions crisscrossing the United States annually, the Mecum Online listing and bidding platform had already been introduced and proven in early 2019. There, it sold the massive collection of prime collectibles and memorabilia from the estate of Steven Juliano. Nonetheless, the company’s return to live auctions has been highly anticipated to say the least, with the 33rd edition of its Indy sale postponed from April but now underway at the Indianapolis State Fairgrounds July 10-18.

Despite the postponement of its highly popular annual Monterey auction normally held near Fisherman’s Wharf, 2020 marks the 20th anniversary of Russo and Steele Collector Automobile Auctions in the incredibly competitive auction marketplace. Responding quickly to the current realities, the company’s efforts carefully refocused. Many shifted the offering of a complete suite of highly personalized services tailored to collector-car buyers, owners, and sellers alike. Among them are Private Sales, Restorations, Storage, Detailing, and Consulting. This move is quite natural, capitalizing on company co-founder Drew Alcazar’s vast expertise in automobile restorations since the 1980s. Plus, utilizing his staunch commitment to his clients, supporters, and the collector-car hobby itself.

Of the catalogue-type auction companies, RM Sotheby’s was first out of the gate with a series of online auctions during the spring and early summer months of 2020 featuring memorabilia, collector vehicles, and single-owner vehicle collections. In addition to its U.S. based events, RM is following up on the success of its first European Online Only auction with the online-only Open Roads European summer auction, taking place July 14-21. Featured consignments include a collection offered on behalf of the late Swiss auto dealer and racing driver Edgar Richoz, comprising highly desirable Ferrarimemorabilia plus an eight-car group of automotive icons including an alloy-bodied 1966 Ferrari 275 GTB. A North American-focused Open Roads Online Auction follows from July 23-30.

RM Sotheby’s will present the online-only Shift/Monterey Auction on August 13-15. It is in place of its long-running Monterey, California auction at the Portola Plaza Hotel near Fisherman’s Wharf. While consignments were still being finalized at the time of writing, RM Sotheby’s has nonetheless already managed to begin advertising a small, yet eye-watering array of elite collector vehicles for Shift/Monterey, ranging from a 1937 Bugatti Type 57C Ventoux and coachbuilt rarities from Pierce-Arrow and Stutz through a 1958 Jaguar XK150 S 3.4 Roadster, on to such icons as a 1959 Facel Vega HK500, an extremely rare 1965 Ferrari 500 Superfast, and such  modern greats as a 1980 BMW M1 Procar and 1991 Ferrari F40.

Gooding & Company’s first-ever auction abroad, the amazing Passion of a Lifetime Collection sale, was scheduled to take place at London, England in April. Sadly is now indefinitely postponed. This uncommon offering was positioned to offer 16 examples of the most important and desirable sporting cars ever conceived. It is our sincere hope that the Gooding & Company team will be able to announce a new sale date soon. Nonetheless, the Santa, Monica-based elite auction house continued with private treaty sales, one of its core strengths. Meanwhile,  Geared Online, the Gooding & Company’s first all-online auction, is August 3rd-7th.

The Geared Online auction series will serve as a complement to the normal live auction events. It is on by a new platform for auctions on the company’s website and mobile bidding app. They present a wide selection of investment-grade collector cars – both at no reserve and with pre-sale reserves. Gooding & Company plans to house all vehicles included in the online auction within one location, facilitating on-site inspections with staff and ready information exchange on behalf of sellers and interested bidders, making for a seamless process.

For its part, the Bonhams U.S. Motoring Department has retooled its 23rd Quail Lodge Auction, scheduled for August 14. It is now a collaboration with the famed Petersen Automotive Museum. In fact, the Bonhams auction serves as part of the Petersen Car Week. This provides a welcome set of car events. It will also feature a Concours d’Elegance as a fitting finale on August 16. The auction will take place at the Bonhams Los Angeles saleroom.  Further, vehicles will be on display and available for one-to-one virtual previews. All with a Bonhams specialist August 12-14 at the museum by appointment. As always, the Bonhams auction will include a definitive printed catalogue for all subscribers and upon request.

The revamped Quail Lodge Auction features Bonhams’ characteristically broad and deep automotive offerings. Judging from the early featured consignments, this year’s event is sure to draw strong bids from collectors around the globe. “Best of the best” examples include one of the most revered, competition-bred prewar automobiles ever produced. This is a 1934 Alfa Romeo 8C 2300 Cabriolet, handsomely bodied by Carrosserie Joseph Figoni. A 1959 Porsche 718 RSK Spyder, in its current ownership since 1974, was successfully raced in period by Bernie Vihl and Bob Holbert, with provenance including multiple First Place wins at the 1959 Bahamas Speed Week. Other early consignments range from the Classic Era to the latest in blindingly fast modern supercars. Plus, most everything in between.

The Simple Lease from Premier Financial Services takes the stress out of bidding at auction. In fact, Premier is your best path to owing any high-end automobile, from leasing a classic Ferrari from auction to driving a modern Supercar home from the dealer. Preparation is key to getting the car of your dreams. Check out the comprehensive resources we have provided on the Premier Financial Services website, and be sure to contact us today. Contact us now to prepare to bid at an auction with confidence and experience our great service and expert advice first-hand.