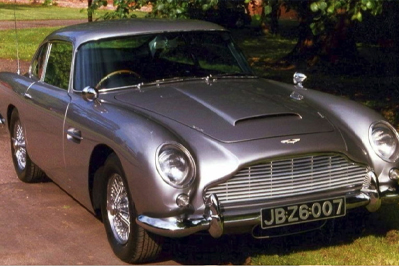 When it comes to classic cars, few are as notable as the 1964 Aston Martin DB5. While the automobile itself is a stunning work of high-performance and design in its own right, it owes much of its notoriety to the James Bond franchise. There, it earned the status as a cultural icon known around the world.

First launched in 1963, the DB5 was the successor to Aston Martin’s DB4 Series V. It boosts numerous improvements that set it apart from its equally attractive forerunner. Though the earliest production models varied slightly, nearly every DB5 came off the manufacturing line with an enlarged all-aluminum engine, This engine moved from the DB4’s 3.7 liters to a more spacious 4.0 liters. Further, it features a new and boldly robust ZF five-speed transmission along with three SU carburetors.

The Sum of its Parts

For its time, the engine was a force to be reckoned with in terms of speed and performance. Kicking out 282 bhp (210 kW) at 5,500 rpm, the DB5 had no problem reaching its top speed of 145 mph, thanks to Aston Martin making it a standard offering after originally using the power unit in its 1962 DB4 Vantage. Even at 3,311 lbs, acceleration for the DB5 was no problem either, as it reached 0-60 mph in 8 seconds, and left its share of rubber at the starting line from the auto’s 288 lb ft of torque.

On the exterior, the DB5 offered sparkling chrome wire wheels which played an ideal complement to the vehicle’s smoothly defined magnesium-alloy body built to the superleggera system’s patented technique. While Aston Martin developed a 2-door convertible for the model, it was the original 2-door 2+2 configuration on its coupe that was the most beloved by enthusiasts. Inside, standard equipment on the DB5 included many features. They include reclining seats, wool pile carpeting, automatic windows, full leather trim and even a fire extinguisher.

With regards to the 007 series, the DB5 made its first appearance in the film Goldfinger which was released in 1964. Driven by Sean Connery’s portrayal of the smartly dressed and intrepid agent, the vehicle quickly became synonymous with James Bond himself, and was later featured in other Bond films such as Thunderball, GoldenEye, Tomorrow Never Dies, and Casino Royale. Interestingly, when Ian Fleming wrote the “Goldfinger” novel, however, the hero drove an Aston Martin DB Mark III as part of the harrowing story, yet it was at Oscar-winning special effects expert John Stears’ request that Bond’s movie character should instead sit behind the wheel of what became the iconic silver-birch DB5 for the feature film.

Because of the 1964 film, the DB5 became known as “the most famous car in the world”. Further, it had two of its models showcased at the New York World’s Fair that same year. This helped spike the vehicle’s sales worldwide. Later, in 2010, the original used in the film sold to Ohio collector Harry Yeaggy at a London auction. With the addition of auction fees, it fetched just above $4,600,000. A hefty price, for certain, but a small price to pay for a piece of the Bond legacy.