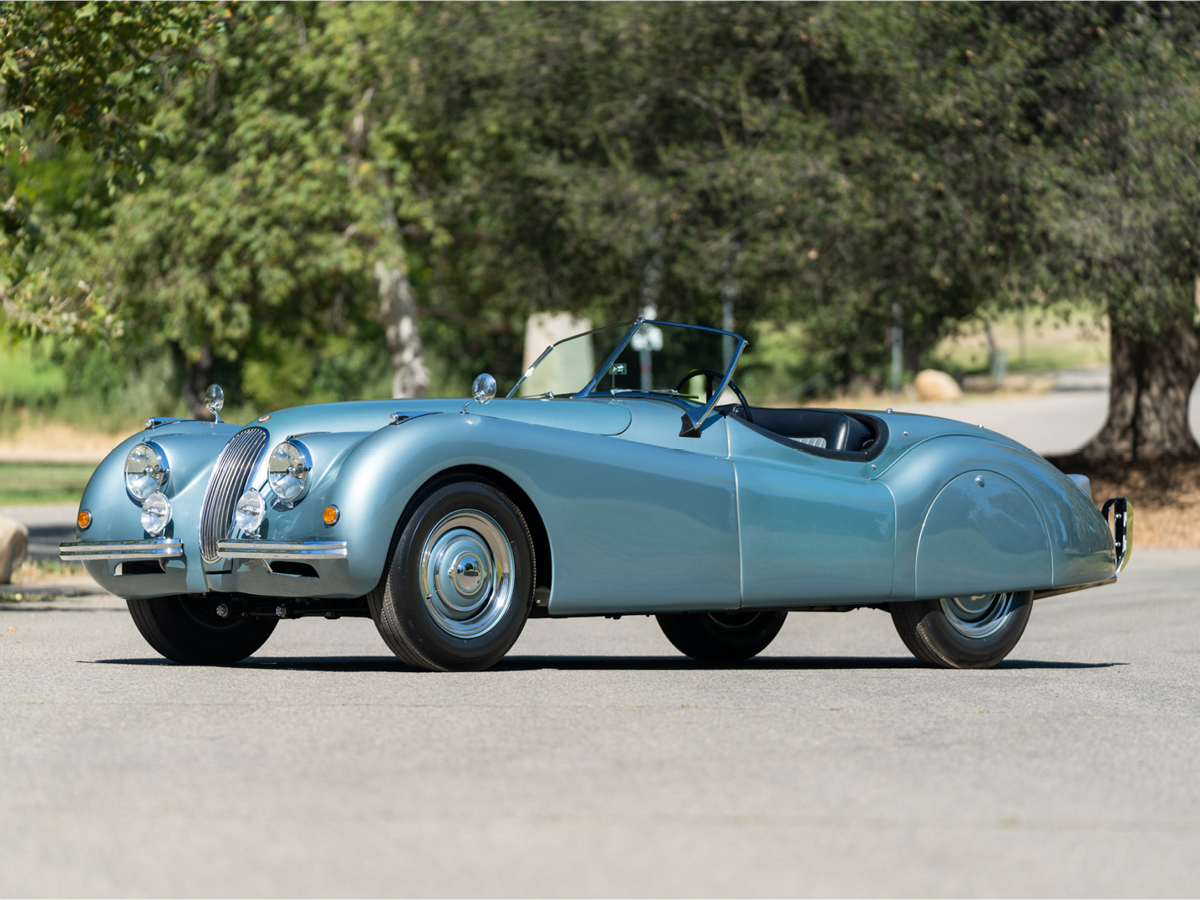 The start of a sports car dynasty

Looking for sparks of optimism in the aftermath of WWII, visitors to England’s 1948 Earls Court Motor Show found a shining star in a stunning new Jaguar sports car, the XK-120. The auto show debut, along with claims of a 120-mph top speed made right in the name of the car, caused a sensation.

The XK-120 was destined from birth to become an icon for the brand, and the entire sports car category. Jaguar, however, initially had a different vision for the XK-120 that might have produced a different outcome.

A very early car, with chassis number 670019, this 1949 alloy-body XK-120 to be offered at the Gooding & Company Pebble Beach auction emerged from the original vision. The car comes from the Tony Vincent Estate Collection of 1930s and 1940s sports cars, with a pre-sale estimate of $250K-$300K.

Lyons and Jaguars, Oh My!

It makes perfect cosmic sense that a man named Lyons would start a company that made cars branded “Jaguar.” Sir William Lyons was a partner in a company called Swallow Sidecars in the 1920s, and after buying out the business in 1934, founded S.S. Cars to design and build a series of sport sedans and roadsters under that name.

The company’s cars also carried the Jaguar model name, including the long and slinky 1936-1939 S.S. 100 roadster, which could hit 100 mph – hence the name. The S.S. 100 was beautiful and rare, with just about 315 made, and it was the first car with Jaguar’s famous “leaper” hood ornament.

The onset of WWII put auto production on hold, but development of an all-new DOHC inline six-cylinder engine continued. In 1945, the company officially changed its name to Jaguar and made plans for a new Mk. VII sedan with the new “XK” engine. Lyons also envisioned the engine powering an S.S.100 successor.

Lyons was not only head of Jaguar, but its chief designer, as well. The XK-120 perhaps took a hint of inspiration from the pre-WWII BMW 328 and Alfa Romeo 8C models, but it was still a fresh and exciting design.

Powered by the new 160-horsepower, 3.4-liter inline-six, the XK-120 could actually exceed 120 mph. This was a 1940s supercar, and, like a supercar, it was originally meant for limited production. With an eye toward making about 200 of the new sports cars per year, Jaguar built aluminum bodies over ash frames, installed on a steel chassis. The first XK-120 production model built (chassis 670003) was reportedly delivered to actor Clark Gable.

The reaction at Earls Court spurred a change of direction; Jaguar would instead put the XK-120 into regular series production with a less costly steel body. The change required about 20 months of further development work, during which Jaguar hand-built 242 aluminum-body XK-120 roadsters, including the car offered by Gooding & Company.

The new body would be made by Pressed Steel Fisher, a major British supplier and contract builder that was also at the time building bodies for the new Rolls-Royce Silver Dawn and its Bentley Mk. VI sibling. The steel-body XK-120 retained aluminum for the doors, hood and trunk lid. Being 110 pounds heavier than the all-alloy body car did not really hurt performance. Jaguar would also offer more powerful engine options soon after series production began in 1950.

The XK-120’s promised top speed was the highest for a production car at the time, and Jaguar made every effort to convey that through the media. Most famously, in May 1949, the second XK-120 prototype built set a record in a demonstration on a closed-off section of the Jabbeke to Aeltre highway in Belgium: 126 mph in the flying mile with a stock body. With a small metal wind deflector replacing the windshield, plus a tonneau cover installed over the passenger side and an aluminum under-tray attached, the car clocked 132.596.

There were also durability trials. In 1950, Stirling Moss and Leslie Johnson averaged 107.46 mph for 24 hours at the steeply banked Autodrome de Montlhéry oval in France. Three years later, the duo returned with two other drivers and averaged 100.31 mph for seven days around the track.

Johnson drove the Jabekke car to the XK-120’s first victory in a one-hour race at England’s Silverstone Circuit. In a different XK-120, he also recorded the model’s first U.S. victory, a class win and fourth overall at Palm Beach Shores, Florida. In the hands of pros and club racers, XK-120s would see many more checkered flags.

One of the earliest surviving alloy-body XK-120s, the car offered by Gooding & Company is said to be a matching-numbers example, confirmed by its JDHT Certificate. In the hands of the same owner for 40 years, the rare Jag was restored by a German marque specialist in its original Pastel Blue over Duo Blue leather.

The alloy-body XK-120s were not only foundational to Jaguar’s status as a world-class sports car power, but also to the growth of the overall sports car segment and racing in the 1950s.