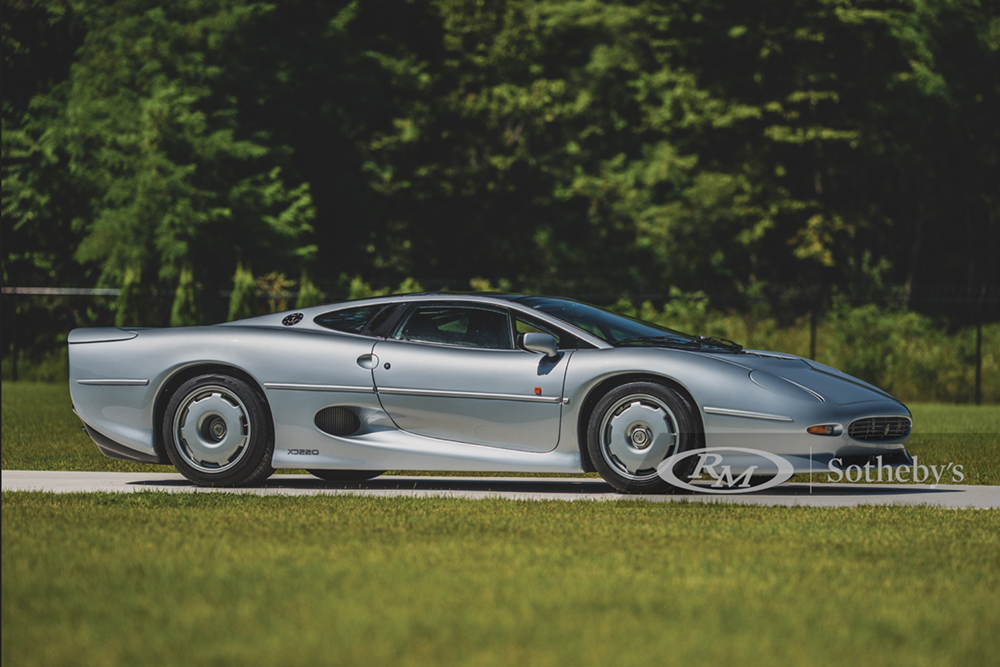 Beautiful Supercar With a Checkered Past

Undeniably one of the most beautiful supercars ever made, the Jaguar XJ220 was also, for a brief moment in time, the world’s fastest. It’s important to put those two facts up front, because the rest of this enigmatic car’s history includes a few speedbumps.

The XJ220 is rare, with about 280 made, and it was never federalized for the U.S. market. The 1993 example sold by RM Sotheby’s Elkhart Collection auction in October was reportedly federalized by a previous owner. The car, finished in Spa Silver, showed 6,822 kilometers (4,239 miles) and sold for $483,500. That seems in line with Hagerty’s valuation of $445k for an XJ220 in “Excellent” condition and $520k for a concours-quality example.

The Jaguar XJ220 was the marque’s closest thing to a road-legal racecar since the late-1950s XK-SS. As such, it is a historical car worthy of collector interest. Collectors have decided, however, that the XJ220 is worth less than its original price of nearly $800,000 in 1993.

Racecar for the Road

Jaguar jumped back into the prototype racing category in the 1980s with the XJR series of racers, winning the 24 Hours of Le Mans in 1988 and 1990 and the World Sportscar Championship in 1987, 1988 and 1991. Understandably, management thought it was a good idea to offer a supercar that echoed the marque’s racing triumphs.

Some of Jaguar’s design staff, known as the Saturday Club for their off-hours work, had conjured up a road car based on the XJR racers. The idea was a limited-production, high-tech flagship sports car that could also compete in the Fédération Internationale de l’Automobile (FIA) Group B segment, which was also the origin story for the Ferrari 288 GTOand Porsche 959.

When the FIA sanctioning body cancelled Group B due to its proven danger, the Ferrari and Porsche supercars instantly achieved legendary collectible status. The story went differently for the Jaguar XJ220.

The Speed Was in the Name

The Jag was intended to also stun with chassis tech and a V12 like that used in the XJR racers. Plus, it featured advanced all-wheel drive, all-wheel steering and a 220-mph top speed target. Hence, the car would be called XJ220.

Jaguar presented a concept car at the 1988 British International Auto Show. This was just four months after it had won the 24 Hours of Le Mans. Timing seemed good. The company took more than 1,000 deposits but would ultimately decide to build 350 cars. As it turned out, even that small number would be more than the market would bear.

Circumstances, however, began to turn against Jaguar. Ford was acquiring the company, and the economy was heading for recession. Meanwhile, Jag’s lack of supercar expertise required shifting XJ220 development and production to Jaguar Sport, a subsidiary created with the company’s competition partner, Tom Walkinshaw Racing (TWR).

A Change in Plans

As development began, changes to refueling regulations nixed the V12 engine. The XJ220 would instead get TWR’s preferred motor, the 3.5-liter twin-turbo V6 used in the MG Metro 6R4 rally car. The V6 was smaller and lighter than the V12, yet was also a powerhouse and was paired with a six-speed manual transmission.

With 542 horsepower and 475 lb-ft of torque, the 3,200-pound XJ220 could do 0-60 mph in about 3.6 seconds and reach a top track speed of 212 mph, or 217 mph without catalytic converters. Though falling a bit shy of the original 220-mph goal, the Jaguar XJ220 still became the world’s fastest car, at least until the V12-powered McLaren F1 arrived shortly afterward. The XJ220 also set a production-car lap record at Nürburgring.

The V6’s compact size allowed Jaguar Design’s Keith Helfet to give the XJ220 what must be one of the most beautiful supercar bodies ever made. Its extreme cab-forward design and long tail gave it the catlike stance a car named Jaguar should have. The cabin presented a simple, comfortable layout, perhaps too simple for the asking price. One neat touch was putting four of the auxiliary gauges in the driver’s door to free up dash space.

Many deposit holders, however, were unhappy about the switch to the V6, deletion of AWD and the huge escalation in price. Estimated at £290k before production began, the super Jag had soared to £490k, or nearly $800k, by the time cars arrived. By then, a global recession was in full force, crimping the entire premium car market.

Pricey Down the Road, Too

Not surprisingly for a car derived from racing technology, maintenance and refurbishment costs for the XJ220 are very high. The XJ220 from the Elkhart Collection had gone back to Jaguar Heritage for comprehensive servicing in 2016, including replacement of the fuel bladders. A cost of £86,000 (around $105,000) was cited, though the car was touted as ready to be “driven regularly.” It also got a set of new XJ220-specific Bridgestone tires, which had become available again in 2017 after an absence of many years.

The XJ220’s history is not perfect, but that does not detract from its desirability. Just look at this car! Who could resist?

If you’ve already got the Ferrari 288 GTO and Porsche 959, an XJ220 would make a fine addition to a Group B collection. Now more than 25 years old, the XJ220 is eligible for private importation under EPA/DOT exemptions, with no federalization required.