Auctions: $125 Million Weekend at The Amelia 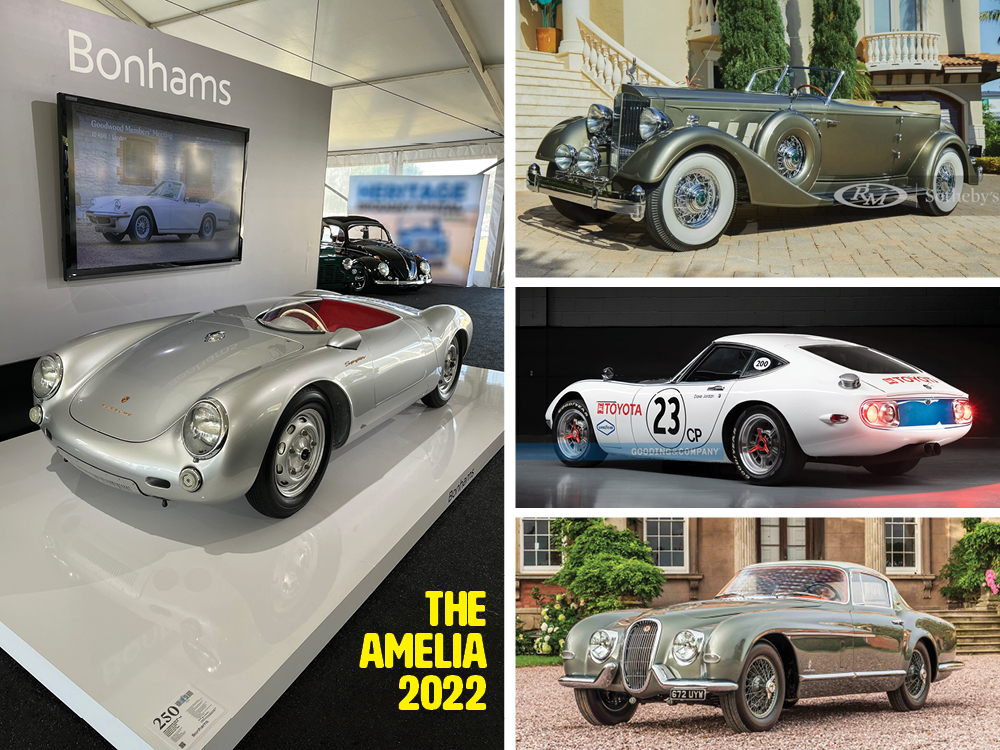 By all accounts, the auctions at The Amelia were a grand success, with the sales from RM Sotheby’s, Bonhams and Gooding & Company totaling nearly $126M. The top car of the event, a 1937 Talbot Lago sold by Gooding & Company, accounted for more than 10 percent of that total. Its $13,425,000 sale price set a world record for the marque and also for French cars.

Numerous other records were broken, including for the most valuable Japanese car, Bentley Continental R and Porsche Carrera GT ever sold at auction. And, can you believe a 1974 BMW 2002tii selling for just over $100K? It all happened at The Amelia.

Congratulations to Premier Financial Services clients who took home some amazing classics and supercars for their collections.

RM Sotheby’s, the official auction house of The Amelia, was the third sale to occur during the weekend and brought in $46,636,640 with an 89 percent sell-through. The top-10 sales included an intriguing cross-section of the collector-car world, with two pre-WWII models once again showing the strength of this segment.

The top sale was a concours-restoration 1934 Packard Twelve Individual Custom Convertible Victoria by Dietrich that sold for $4.13M, about the middle of its pre-sale estimate range. One of three known examples remaining today, this Packard won First in Class and runner-up to Best of Show at the 2014 Pebble Beach Concours d’Elegance.

RM Sotheby’s #2 car was the most valuable Ferrari of the event, a La Ferrari with only 576 original miles that sold for $3,662,500. One rung down in sale price, it was back to the pre-WWII era with a 1930 Duesenberg Model J Convertible Sedan by Murphy that sold for $3.525M, exceeding its high estimate by $1M.

Next came two of the world’s fastest cars, including the first Bugatti Chiron Sport said to sell at an auction in North America, bringing $3.360M. One of 60 built, this Bugatti was enjoyed by its seller, having racked up nearly 4,000 miles. (The 1994 Bugatti EB110 GT prototype that sold for $2.1M is not on the top-10 list, because it was sold after the auction, not as part of the bidding.)

Repeating a pattern seen at Scottsdale, a Mercedes 300 SL Gullwing and a 300 SL Roadster landed in the RM Sotheby’s top-10. The 1953 Cunningham C-3 Cabriolet that sold for $1.215M, one of five built, was once owned by Lucie Cunningham, daughter of racer and marque founder Briggs Cunningham.

Another eye-opener in the under-million-dollar club was a 1972 Mercedes-Benz 600 sedan selling for $445K, about $200K above Hagerty’s estimate for a concours-condition model. The key to the value was this car being a well-preserved original with just 3,335 miles from new.

By far the weekend’s biggest auction in terms of revenue, Gooding & Company sold 91 out of 98 lots for $66,534,480. The company called it the most successful of its auctions held in conjunction with The Amelia over the past 13 years.

Twenty percent of that total went to one car, an indescribably stunning 1937 Talbot-Lago T150-C-SS Teardrop Coupe with coachwork by Figoni et Falaschi that brought $13,425,000. The top sale for the entire 2022 Amelia event, this car set a new world record for the Talbot-Lago marque at auction and also for the most valuable French automobile ever sold at auction. The pre-sale estimate was “in excess of $10M.”

The Gooding & Company Amelia Island sale can also once again claim the most valuable Japanese car sold at auction with the 1967 Toyota-Shelby 2000 GT getting a remarkable $2.535M. Though $215K under the low estimate, it was enough to put the historic Toyota in the tenth value spot for the weekend, according to Hagerty. This was the first production 2000 GT and the first of three sent to Carroll Shelby’s operation in California to campaign in SCCA C-Production for 1968. Gooding & Company had previously set the record for most valuable Japanese car sold at auction at its 2017 Amelia auction, a 1989 Mazda 767B racer that sold for $1.75M.

Gooding also set a world auction record for the Bentley R-Type Continental, a well preserved 1954 model selling for $2.975M. A 1963 Chevrolet Corvette with the Z06 race-prep package also achieved an auction record at $1,242,500.

Also of note, Gooding & Company says Porsches accounted for one third of its cars offered, and that all were sold. Eighteen came from a single collection. The #10 car, a 2005 Porsche Carrera GT, set a record for the model at $2,012,500.

The Bonhams sale was also another success, with 202 out of 213 cars sold for a total of $13.5 million. One car accounted for nearly a third of that, a 1955 Porsche 550 Spyder that sold for $4.185M to a telephone bidder. This was a bit below its low estimate of $4.5M but still a stellar sale. Notably, Bonhams said this car was the first of its type offered for sale in half a century. An American serviceman stationed in Germany bought the Porsche in 1959 and brought it back to the U.S., where the consignor purchased it in 1972.

Six of Bonhams’ top 10 were pre-WWII cars, with the #2 car, a 1929 Duesenberg Model J Convertible Victoria with coachwork by Rollston, selling for $1,066,500 — just past the middle of its pre-sale estimate.

Could anyone ever top Sir William Lyons for his great Jaguar designs? Pinin Farina gave it a go in 1954 with an Italian take on the XK120 sports car, creating a one-off aerodynamic coupe with some pre-WWII Alfa Romeo overtones. The car, which had been “found in a sorry state” in 1972, was restored to its former glory and sold for $940K, just past its low estimate.

Speaking of all things British, Bonhams had the honor of selling the first-ever Rolls-Royce-built Bentley, a 1933 3½ Liter Sports Tourer called the “pivotal link between the W.O. Bentley and Rolls-built cars.” This historic model brought $428K, just past its low estimate. The consignor had owned it since 1962.