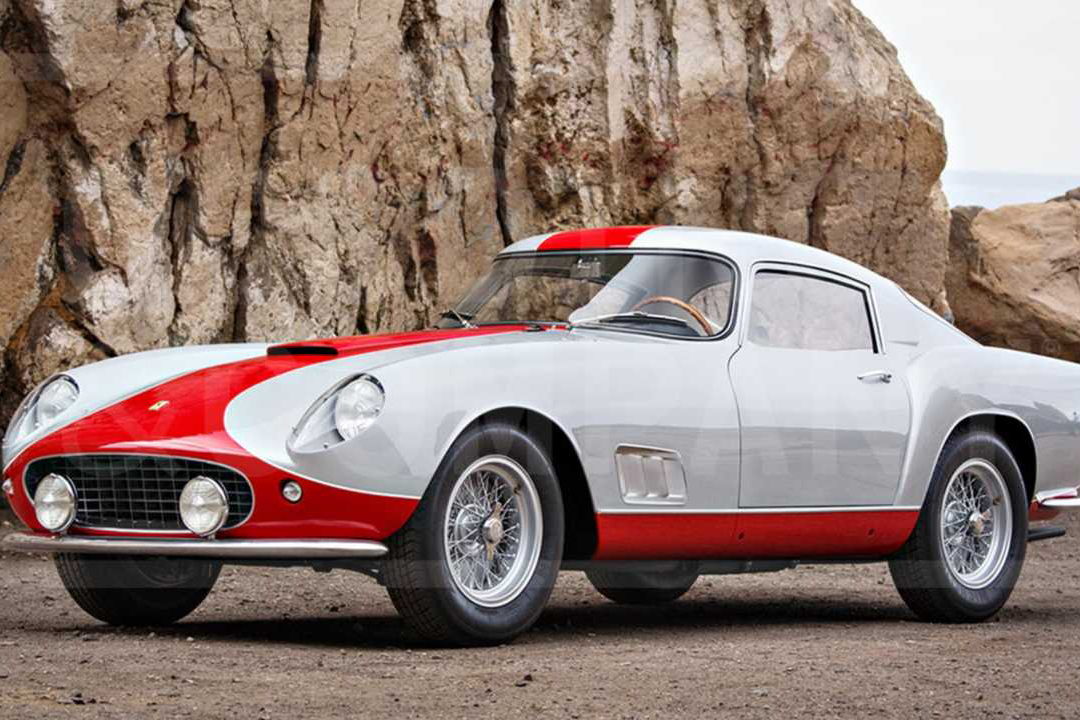 Its Name Was Its Badge of Honor

Mention “Tour de France” and “Ferrari” together in certain circles, and many will think first of Lance Armstrong winning the famous French bicycle race over and over and over with “help” from a disgraced trainer named Michele Ferrari.

Set them straight by telling the story of the “other” Tour de France. The one that Alfonso de Portago and Oliver Gendebien won in their Ferrari 250 GT Berlinettas. Their victories earned this model its “250 GT Tour de France” nickname, or 250 TdF for short. It was always an unofficial name, but Ferrari more or less made it official when it built the F12Tdf model a few years ago as an homage to the classic version.

Following the tragic crash at Le Mans in 1955, the FIA instituted a return to emphasizing dual-use grand touring cars. Ferrari commissioned Scaglietti to build a new series of competition coupes based on its 2,600-millimeter (102.4-inch) wheelbase 250 GT chassis. They already qualified for the new GT-class formula.

The 250 GT Berlinetta Competizone that emerged in 1956 was mobile dynamite. It put the 3-liter Colombo V-12 engine in a 2600-mm-wheelbase (102.4-inch) steel tubular chassis. Further, draping it with the luscious hand-built aluminum body by Scaglietti, based on previous Pininfarina designs for Ferrari.

The new Berlinetta Competizione looked so right. So perfectly proportioned with its long hood, sloping roofline and, on later models, faired-in “sugar scoop” headlights. It certainly deserves a spot on the list of most beautiful Ferraris, although admittedly, that’s not a short list.

This was a true dual-purpose car. A GT that was as capable touring the continent quite rapidly as racing on its fabled circuits. Moreover, The 250 GT Berlinetta Competizione found quick acceptance by both professional and gentlemen racers. As a result, it excelled in the hands of both.

Driving the new Berlinetta for Scuderia Ferrari, de Portago with his navigator Edmund Nelson won the Tour de France Automobile in 1956. Next, Gendebien’s victories followed there in 1957 and 1958. Gendebien won again in 1959 in the so-called 250 GT “Interim,”. The Interim was a model that previewed the design of the upcoming 250 SWB (short wheelbase) Berlinetta. However, it was on the 102.4-inch long-wheelbase chassis.

No Country for Old Bicycles

Winning the Tour de France Automobile was a huge deal. Consider the history: First run in 1899, the Tour de France Automobile preceded the famous bicycle race by four years. It ran in various forms in the decades following, with some interruptions, before emerging in the 1950s as one of the world’s most important sports car races. It was a kind of ultimate endurance contest, a 6-10 day “tour” of France punctuated with competitions at race tracks, plus hill climbs and drag races. Results from all stages were tallied to determine winners.

That’s “Louvers,” not “The Louvre”

Ferrari went on to build 77 250 GT TdF Berlinettas in four series, plus the “Interim” car. There were design differences during the run, most notably the headlight and grille and number of vent louvers on the rear pillar. There were 14 Series I cars, including five by Zagato, with no louver. Next came 9 Series II cars with 14 louvers. These were followed by 18 Series III cars featuring 3 louvers and Plexiglas-covered headlights, and then 36 Series IV cars with a single louver and covered headlights.

The car offered by Gooding, chassis 0903, is the fifth Series IV car built. It was delivered new to Swedish racer Sture Nottorp and later sold to another Swede, Kjell Lundberg. The car ultimately came to the U.S.

Ferrari specialist Motion Products in Neenah, Wisconsin restored this TdF in 2012, finishing it in a period grey and red livery, complemented by a light grey leather interior. In the cabin, special Heuer stopwatches are mounted in a unique rally binnacle in the wrinkle-finish dashboard.

This Ferrari Classiche-certified 250 GT TdF then won a “tour de concours,” earning a Platinum Award at the 2013 Cavallino Classic in Florida; a first-place Blue Ribbon at the 2013 Amelia Island Concours d’Elegance, and a Premio d’Onore award at Italy’s 2013 Concorso d’Eleganza Villa d’Este.

What additional awards await this car in its next owner’s hands?